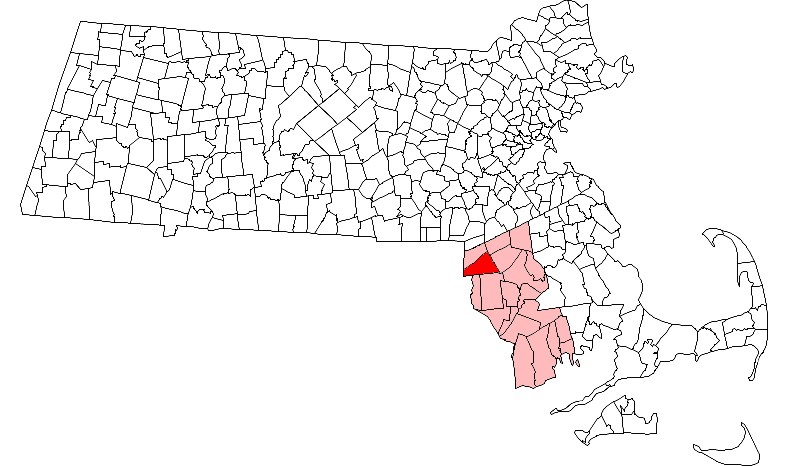 Attleboro is a city in Bristol County, , and is immediately north of . Once known as "The Jewelry Capital of the World" for its many jewelry manufacturers, Attleboro had a population of 42,068 at the 2000 censusGR|2.

During the colonial period, lived in North Attleboro. During the Native American insurgency Woodcock's son was murdered and his head was placed on a pole in his front yard. The house where Woodcock lived is now a historical monument. It is rumored once passed through and stayed near the Woodcock Garrison House at the Hatch Tavern where he swapped one shoe buckle with Israel Hatch, a revolutionary soldier and new owner of the Garrison House.

The city became known for jewelry manufacturing, notably through the Company starting in 1913. However, the company has since moved out of the city, with the site of the former plant turned into a riverfront park. The Balfour Company was not the only jewelry manufacturer or supplier to the jewelry manufacturing trade in Attleboro. At one time, Attleboro was known as "The Jewelry Capital of the World." There are jewelry related manufacturing firms in Attleboro which continue to operate. One of these companies is Guyot Brothers Company, [cite web | url=http://www.guyotbrothers.com/aboutus.htm | title=Brief history of jewelry findings manufacturer Guyot Brothers | publisher=Guyot Brothers Company, Inc. | year=2003-2007 | accessdate=2007-06-09] which was started in 1904. General Findings, M.S. Company, James A. Murphy Co., Garlan Chain, and Masters of Design, which was started by former Balfour employees, are still jewelry related manufacturing companies still currently in operation.

Attleboro is officially a part of the .

There were 16,019 households out of which 33.4% had children under the age of 18 living with them, 53.6% were married couples living together, 10.6% had a female householder with no husband present, and 31.8% were non-families. 25.7% of all households were made up of individuals and 9.4% had someone living alone who was 65 years of age or older. The average household size was 2.57 and the average family size was 3.12.

Attleboro has its own school department, with five elementary schools (Hill-Roberts, Hyman Fine, A. Irvin Studley, Peter Thacher and Thomas Willett), three middle schools (Brennan, Coelho and Wamsutta), and Attleboro High School. Attleboro High School's nickname is the Blue Bombardiers, and the school mascot is an eagle. They have a traditional rivalry with North Attleborough High School, whom they play for their Thanksgiving Day football game.

In addition to Attleboro High School, which has its own vocational division, students from the city and surrounding towns may choose to attend , a Roman Catholic high school opened in 1961 and named for Bishop , second Bishop of the Diocese of Fall River. The city also has a satellite branch of , which is located in the city's former high school building.

Attleboro is located along I-95 (which enters the state between Attleboro and Pawtucket, Rhode Island), I-295 (whose northern terminus is near the North Attleborough town line at I-95), and US 1, as well as Routes 1A, 118, 123 and 152, the last three all intersecting at Attleboro center. The city is also home to two MBTA commuter rail stations: one in the downtown area and the other near the Rhode Island border in the South Attleboro district.

Attleboro and Taunton are both served by , or GATRA, which provides bus transit between the two cities and the surrounding regions.

All Saints Episcopal Church (1890) on North Main Street represents that traditional English presence in the community &mdash; though the church is now very diverse. In 2007 All Saints Episcopal Church divided over the liberal policies of the ECUSA resulting in the establishment of All Saints Anglican Church in the Hebronville village of Attleboro which is affiliated with an Anglican diocese under a Bishop in Uganda.

(1748), located near the town common, is typical of a New England town. Second Congregational had a stately white clapboard building that was destroyed by fire. A red brick building replaced it in the early 1900s.

(1875) on North Main Street is also typical of a New England town.

(1903) on North Main Street recently celebrated its 100th anniversary. It was historically "the Swedish church," though it includes many different ethnic groups today.

Congregation on Kelly Boulevard is part of the Jewish Reconstructionist movement.

There are a number of Protestant denominations represented in Attleboro including Baptist (Grace Baptist on Oakhill Avenue, the Bible Baptist on Union Street, and 1st Baptist on South Main), ( on Pleasant), (also on Pleasant), {located on Leroy Street), (the on Newport Avenue), and on North Main Street (Rt. 152).

There are also numerous non-denominational churches such as [http://www.gnbc.org Good News Bible Chapel] on West Street (1935), [http://www.candleberryministries.com Candleberry Ministries] on South Main St. (Rt. 152), and a handful of ethnic congregations started through .

The Salvation Army located on Mechanic Street offers Sunday Services as well as weekday and evening support services including "Bridging the Gap" for adolescent support.

The Attleboro Area Council of Churches is very active in the community.

, a new religious movement, was founded in Attleboro.

In late 2003, "" reported that a state probe had been launched into the deaths of four city women from glioblastoma. As of October 2005, no report has been issued, and the status of the probe is unknown.