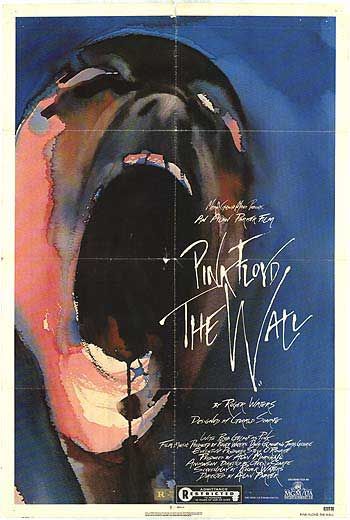 "Pink Floyd The Wall" is a 1982 by British director based on the 1979 album "". The was written by Pink Floyd and . The film is highly and is rich in symbolic and . It features very little and is mainly driven by Pink Floyd's music. Although it features a linear storyline, in many ways "The Wall" more resembles a long-form than a traditional narrative feature film.

The film contains fifteen minutes of elaborate sequences by the ist and part of which depict a nightmarish vision of the German bombing campaign over the during set to the song "".

The film depicts the construction and ultimate demolition of a metaphorical wall. Though the film is highly interpretable, the wall itself clearly reflects a sense of isolation and alienation.

Pink, the tragic hero (and ) of the film, is depicted at various stages of physical and mental development. Pink is first seen sitting lethargically by himself in a hotel room, just after having trashed it. During the following scenes, it is revealed that Pink's father was killed during while he was just a baby.

The movie then flashes back to Pink as a young English boy growing up in the early 1950s. Throughout his childhood, Pink longs for a father figure, and is devastated to learn of his father's death through a certificate sent by "Kind Old King George". Pink bids farewell to his "blue sky" and begins construction on his wall. Later, Pink is seen along with two cronies laying cartridges from his father's service weapon on a railroad, where he is caught by a domineering teacher.

The scene then switches over to Pink's school, where he is humiliated by the teacher for writing poems in class. The poems that the teacher reads aloud are lyrics from "Money" from the Pink Floyd album "". Pink is also affected by his overprotective mother, who aims to lower his sexuality and tries not to let anyone 'dirty' get near him. Despite this, Pink eventually gets married, but over the years, he and his wife grow further and further apart, with Pink concentrating on his music; his wife becomes involved with an anti-nuclear arms group, and eventually has an affair with the leader of the group while Pink is on tour. During this point it is revealed that Pink's last name is Floyd, giving him the same name as the group.

When Pink learns of the affair, he fills in the gaps in his wall with expensive materialistic possessions (stereos, fancy cars, television sets, etc.). Mirroring his wife's infidelity, Pink (now a rock star) turns to a sexually willing (), inviting her to his hotel room despite his initial exasperation with her. Following the groupie's theatrical ramblings concerning his hotel room, Pink falls into another one of his television-induced trances, only to eventually have an emotional breakdown, trashing the hotel room and driving the groupie away. After years of repressed rage and mental anguish, Pink declares that he doesn't need anything at all, and completes his wall.

Behind his freshly completed wall, Pink slowly begins to lose his mind to metaphorical worms eating into his brain. He begins to see the drawbacks of isolating himself from society, and tries vainly to reconnect with the outside world. After failing to do so, Pink locks himself within his hotel room, and spends his days creating an odd shrine out of his ruined possessions. Eventually, Pink shaves off all of his body hair, giving birth to his fascist alter-ego.

While watching "The Dam Busters" on television, Pink, discovering what he has become, falls into a catatonic state, during which he attempts to reconnect with the past and reverse the fading of his roots. At a train station, Pink is told that human connection is the only way to bring down his wall. However, Pink continues to dwell on the bricks in his wall, unaware of his manager knocking at the door of his hotel room. In the real world, Pink's manager (), along with the hotel manager () and some paramedics, discover Pink in his catatonic trance, and inject him with drugs to snap him out of it.

The drugs cause Pink to hallucinate, causing him to believe that he is a fascist dictator, and that his concert has become a hate rally, in which the melody of "" is recreated as a military march by a plus with Wagnerian overtones. Upon his orders, Pink's followers proceed to tear apart the houses and restaurants of minorities and generally destroy everything in their path (with the song "" played during this scene). After the riot, Pink holds a rally in a suburban neighborhood singing "", while frightening locals. The scene is inter-cut by the famous images of the animated Marching Hammers that across ruins. At the climax of his rule, Pink's conscience finally rebels, and he ends up taking refuge in a bathroom stall in an unknown building, tearful and mumbling to himself. In the final sequence, Pink goes before a bizarre trial, shown entirely in animation. Pink is animated as a small blank-faced doll that rarely moves. The judge is animated as a giant pair of buttocks wearing a British judge's wig and speaking out of its . In the court appears Pink's mother, flying in as a giant airplane and a talking vagina; the schoolmaster, a marionette; and Pink's wife, morphing from a snake to a scorpion to a fiery-haired hag with literal "love handles" and exposed vagina. After hearing evidence from them all, the judge decrees that Pink should be "exposed before [his] peers" and orders him to "tear down [his] Wall."

Eventually, the Wall is torn down, represented by children cleaning up the street after a riot, and it is unknown what has happened to Pink. The film ends on a child dumping the contents of an unused onto the street. The audience members are left to perceive their own idea of the ending.

Director Alan Parker, a fan of Pink Floyd, asked EMI whether "The Wall" could be adapted to film. EMI suggested that Parker talk to Waters, who asked Parker to direct the film. Parker instead suggested that he produce it and give the directing task to Scarfe and , a cinematographer. [cite book |last=Schaffner | first=Nicholas | title=Saucerful of Secrets | publisher=Dell Publishing | pages=244-245] Waters began work on the film's screenplay after studying scriptwriting books. He and Scarfe produced a special-edition book containing the screenplay and art to pitch the project to investors. While the book depicted Roger in the role of Pink, after screen tests, Roger was removed from the starring role. [cite book |last=Schaffner | first=Nicholas | title=Saucerful of Secrets | publisher=Dell Publishing | pages=245-246] and replaced with the edgy punk musician .

Since Roger was no longer in the starring role, it no longer made sense for the feature to include Pink Floyd footage, so the live film aspect was dropped. Waters and Parker were not given much of a choice anyway, because the footage culled from the five "Wall" concerts that were held specifically for filming was deemed unusable. [cite book |last=Schaffner | first=Nicholas | title=Saucerful of Secrets | publisher=Dell Publishing | pages=246]

A documentary was produced about the making of "Pink Floyd The Wall" entitled "The Other Side of the Wall" that includes interviews with Parker, Scarfe, and clips of Waters, originally aired on in 1982. A second documentary about the film was produced in 1999 entitled "Retrospective" that includes interviews with Waters, Parker, Scarfe, and other members of the film's production team. Both are on The Wall DVD as extras.

The film was originally released on VHS and LaserDisc on the former MGM/UA Home Video in 1983Fact|date=May 2008, and continued on with what became until around 2000 (it was originally not part of MGM's pre-1986 library acquired by ). The following year, after Turner merged with , the film was incorporated into Turner's holdings, but since had, by that time, owned some rights to the film (along with Roger Waters' production company, Tin Blue, Ltd., and music publishing company Kimbridge Music), the video rights were transferred from MGM to Sony Music Video, and all current video releases are from Sony MusicFact|date=May 2008. However, (via Turner) remains the television and theatrical rights holder for the filmFact|date=May 2008.

The only songs from the album not used in the film are Hey You and The Show Must Go On. Most of the "Hey You" footage was later edited into the film, and raw footage of the intact sequence was first made available on the DVD release as a deleted scene.

Roger Waters has expressed dissatisfaction with the filmFact|date=May 2008, and is reportedweasel-inline to have been philosophically at odds with director Alan Parker during filming, who himself walked out of the project on multiple occasions due to the conflict.

David Gilmour stated (on both the episodes of and ) that the making of the film was where the feud between him and Waters started. Gilmour also stated on the documentary Behind The Wall (which was aired on BBC TV and VH1 in the US) that "the movie was the less successful telling of The Wall story as opposed to the album and concert versions". The film entered at #28 of the US Box Office charts despite only playing in one theatre on its first weekend, grossing over $68,000, a rare feat even by today's standards. The film then spent just over two months below the top 20 while still in the top 30, before moving up to its peak placing of #3 from the low 20's the previous week.

* [http://www.thewallanalysis.com A Complete Analysis of Pink Floyd The Wall] by Bret Urick
*
*