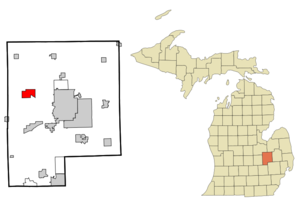 The Flint River forms most of the southern border of Flushing.

There were 3,435 households out of which 29.7% had children under the age of 18 living with them, 55.8% were married couples living together, 10.2% had a female householder with no husband present, and 31.1% were non-families. 28.4% of all households were made up of individuals and 14.3% had someone living alone who was 65 years of age or older. The average household size was 2.38 and the average family size was 2.92.

Flushing sprang up as a railroad town long ago. Charles Seymour (formerly of Flushing, ) is credited with naming the small Michigan community in the 1830s. The original Flushing (located in the borough of ) was first settled in 1645 and is named after the city of Vlissingen, Holland - also known as .

The new Flushing Middle School was completed in 2005 and houses approximately 750 seventh and eighth grade students. Students in the middle school have access to a variety of technology labs to enhance their learning. A physical science technology lab is available to all students for one semester as a part of the eighth grade physical science curriculum. A computer applications class is required of all students. A computer lab is available in the Library Media Center for student use for word processing, Internet and other computer applications. Also in place is an integrated learning lab for skill development in math and language arts and a mini-lab for foreign language instruction. Students have available to them core academic subjects and choices in exploratory electives with supporting technology. The middle school is fully accredited by North Central Association. The old Jr. High was built in 1927, and now is used for adult education.

*The original proposed name for Flushing was "Dover".