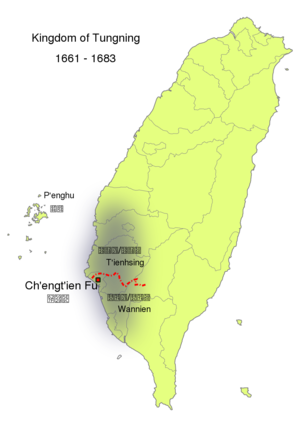 The Kingdom of Tungning was the first to rule , between 1661 and 1683. It was a pro- kingdom, and was founded by , after the destruction of Ming power by the . Koxinga was son of a former pirate who styled himself as a loyalist; he hoped to marshal his troops on Taiwan and use it as a base to regain for the Ming Dynasty.

The Kingdom of Tungning (zh-tsp |t=東寧王國 |s=东宁王国 |p=Dōngníng Wángguó) is also sometimes called the Kingdom of Zheng (Cheng) (zh-tsp |t=鄭氏王朝 |s=郑氏王朝 |p=Zhèngshì Wángcháo) or the Kingdom of Yanping (延平王國). Admiral Koxinga called Taiwan Tungtu/Dongdu. It has been called in western histories the Kingdom of Taiwan, [Kerr, George H. (1945) "Formosa: Island Frontier" "Far Eastern Survey" 14(7): pp. 80-85, p. 81] and the period of rule is sometimes referred to as the Koxinga dynasty. [ [http://www.wufi.org.tw/eng/intlstat.htm "Historical and Legal Aspects of the International Status of Taiwan (Formosa)" WUFI] ]

In 1661, Koxinga forced a landing at Luerhmen (zh-tsp |t=鹿耳門 |s=鹿耳门 |p=Lù'ěrmén), Taiwan. In less than a year, he captured Fort Zeelandia and negotiated a treaty [ [http://cns.miis.edu/straittalk/Appendix%201.htm "Koxinga-Dutch Treaty (1662)" Appendix 1 to Bullard, Monte R. (unpub.) "Strait Talk: Avoiding a Nuclear War Between the U.s. and China over Taiwan" Monterey Institute of International Studies] ] with , the Dutch governor, where the Dutch surrendered the fortress and left all the goods and property of the behind. In return, all Dutch officials, soldiers and civilians left with their "personal" belongings and supplies back to Batavia, ending the 38 years of Dutch colonial rule on Taiwan. Koxinga proceeded to devote himself to building Taiwan into an effective base for anti-Qing Dynasty sympathizers who wanted to restore the Ming Dynasty to power.

In 1662, at the age of 39, Koxinga died of , although speculations said that he died in a sudden fit of madness upon hearing the death of his father under the Qing. His son, , succeeded him as the ruler of Taiwan, with the inherited title of .

For the next 19 years, Zheng Jing tried to provide sufficiently for the local inhabitants and reorganize their military forces in Taiwan. Contact with the Emperor of the Qing Dynasty from the China through ambassadors was frequent. Under Qing pressure, Zheng Jing struggled to defend , and the islands, which he had eventually lost over the years, mainly due to his minuscule forces which were insufficient to defend from the Qing. During , Zheng Jing launched an offensive in the area. With the end of the revolt, Zheng suffered a serious defeat. After the defeat, Zheng returned to Taiwan where he indulged in wine and women, soon after dying of illness. His son, , succeeded him.

The Kingdom of Tungning existed for just over 20 years, but due to its parallels to the current , it continues to hold great symbolic value.

After its defeat in the in 1949, the (ROC), led by the , retreated to Taiwan, leaving Mainland China to the Communist Party who later established (PRC). For the next several decades, the ROC was devoted to regaining the mainland, by maintaining island bases in proximity to the mainland (e.g. ), just as Koxinga and his descendents had done. Although the ROC has since democratized and is no longer singularly devoted to reconquering the mainland, the political and territorial arrangement has remained unchanged. In this respect, there is a striking parallel between the Qing/Koxinga situation and the current PRC/ROC situation.

The of the ROC have, unsurprisingly, focused on the goals of Koxinga, i.e. to use Taiwan as a base for restoring their government to Mainland China, parallel to how they view themselves as the defenders of the ROC, and Taiwan as a base from which the ROC will regain the mainland. The PRC has generally focused on the fact that Koxinga liberated Taiwan from Dutch colonialism for the sake of the motherland, while downplay the fact that Koxinga was in fact devoted to overthrowing the mainland government at the time to restore a previous dynasty.