Martin Stadium is an outdoor athletic stadium in Pullman, Washington, United States, on the campus of Washington State University. It is the home field of the Washington State Cougars of the Pacific-12 Conference, and is the smallest football stadium in the conference. The FieldTurf playing field runs an unorthodox east-west, at an elevation of 2,520 feet (770 m) above sea level.[1]

The stadium is named after Clarence D. Martin, the governor of the state of Washington from 1933–41, and a former mayor of Cheney, near Spokane and ironically, a graduate of the University of Washington. Martin Stadium opened on September 30, 1972, with a disappointing 19-point loss to Utah, then a member of the WAC,[2] with 20,600 in attendance. [3] Two and a half years had passed since its predecessor, the wooden Rogers Field, was significantly damaged by fire, a suspected case of arson.[4] The WSU Cougars played all of their home games at Joe Albi Stadium in Spokane in 1970 and 1971.

As of 2006, the stadium has a seating capacity of 35,117. Since the renovation of Reser Stadium at Oregon State, Martin Stadium has fallen to last in seating capacity among Pac-12 football stadiums. The current attendance record was set during the championship year of 1997, when WSU beat Stanford in front of 40,306 fans on November 15. (The '97 Cougar team won the Apple Cup in Seattle the following week to win the Pac-10, and played in the Rose Bowl for the first time in 67 years.) Despite the relatively small size of Martin Stadium, it has one of the highest ratios of seating capacity to population base; almost 1.6 seats per every citizen in the city of Pullman, and a seat for everyone in Whitman County.

Martin Stadium was the first college football stadium to expand by removing its 400 meter running track and lowering the playing field, in this case by 16 feet (5 m). This modification in 1979 added over 12,000 new seats, most of which were closer to the field (and the opponent's bench). The first game following the renovation was played in October 1979, a victory over the UCLA Bruins. Following a 10-3 season and an undefeated home campaign in 2003, Martin Stadium was ranked by Sports Illustrated as one of the toughest stadiums for visiting teams in college football.[citation needed] 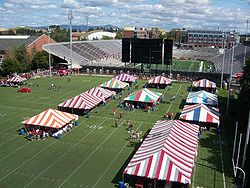 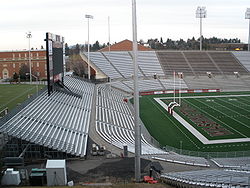 West end of Martin Stadium in 2008 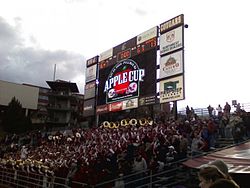 WSU defeats winless UW 16-13 in double overtime at the 2008 Apple Cup. The score is shown on the new scoreboard behind the west end zone, part of phase II upgrades. 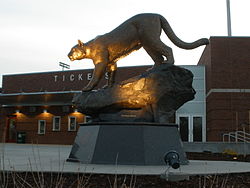 The 11-foot-tall bronze "Cougar Pride" statue in front of the WSU ticket office in 2008, at the renovated NE plaza of the stadium.

Since 1982, a Cougar victory, the rivalry game with UW has been played at Martin Stadium, with the Cougars winning six of the fourteen Pullman games. Through the 2009 season, WSU has won 4 out of the last 6 Apple Cup games, but trails in the overall series by a significant margin.[8]

Sharing with a rival

For two and a half seasons, 1999-2001, the Idaho Vandals of nearby Moscow borrowed Martin Stadium to use as its home field, as Idaho transitioned from Division I-AA back up to I-A. At the time, the Vandals' Kibbie Dome was too small to support the NCAA's attendance requirements for Division I-A. The attendance criteria was changed and Idaho is now a member of the WAC in Division I FBS, and uses its own facility.

Washington State and Idaho renewed their dormant football rivalry in 1998, and matched up annually in the Battle of the Palouse for a decade. The game was played at Martin Stadium in September, although the 2003 game was curiously played far from the Palouse, 300 miles (480 km) west at Seahawks Stadium in Seattle.[9] After a ten year renewal, new Vandal head coach Robb Akey, a former WSU defensive coordinator, stated that he preferred the game not be played every year.[10] The game was last played in 2007 and no games with Idaho are currently scheduled.

At 10:30 p.m. on Saturday, April 4, 1970 (the first day of spring break), residents heard what they described as a gunshot at the football stadium. By 2:00 a.m., the south grandstand and press box of the 1930s wooden venue had burned to the ground, witnessed by a thousand residents and firefighters.[4] The exact cause, or offender, was never found, though there were several suspects.

The Cougars played their entire home schedule for the 1970 and 1971 football seasons at Joe Albi Stadium in Spokane. The fire also displaced the Idaho Vandals, whose wooden Neale Stadium was condemned before the 1969 season (and set afire by arson that November). The Vandals had used WSU's Rogers Field for its three Palouse home games in 1969 and were planning to use it again in for four home games in 1970. Without another suitable stadium in the Moscow-Pullman vicinity, Idaho played its 1970 home schedule at the reduced capacity Rogers Field, returning to its Moscow campus in 1971. The 1970 WSU-Idaho game in Spokane on September 19 was dubbed "The Displaced Bowl," and was easily won by the Cougars, 44-16, their only victory of the season.[11][12]

The name "Rogers Field" continues on campus, transferred to areas used for intramural sports and football practices west of the stadium.[7]

The public address announcer at Martin Stadium is WSU professor Glenn Johnson, who is also the mayor of Pullman. Johnson is known for his first-down call of "...and that's ANOTHER...", to which the crowd responds by chanting "...COUGAR FIRST DOWN!" in unison along with Johnson.

Another Tradition at WSU is attending every ESPN College Gameday with WSU flags raised in the background during the show. The tradtion has lasted since 2004.