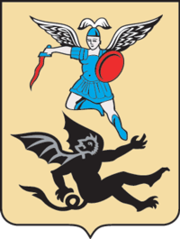 Arkhangelsk ( _ru. Арха́нгельск), formerly called Archangel in English, is a city and the administrative center of , . It lies on both banks of the river near its exit into the in the far north of European . City districts spread for over km to mi|40 along the banks of the river and numerous islands of its delta. Arkhangelsk was the chief seaport of medieval Russia. It is served by and the smaller . The city is located at the very end of the km to mi|1133|abbr=yes long railroad, connecting it to via and . Population: ru-census|p2002=356051|p1989=415921

The area where Arkhangelsk is situated was known to the s as . told from his travels circa 800 of an area by a river and the White Sea with many buildings. This was probably the place later known as Arkhangelsk. According to there was a Viking raid on this area in 1027, led by .

In 1989, an unusually rich silver treasure was found by the mouth of Dvina, right next to present day Arkhangelsk. It was probably buried in the beginning of the 12th century, and contained articles that may have been up to 200 years old at that time.

Most of the findings are made up by a total of convert|1.6|kg|lb|abbr=on|2|lk=on of silver, mostly coins. Jewelry and pieces of jewelry hail from Russia or neighbouring areas. Most coins were German, but there was also a smaller number of Kufan, English, Bohemian, Hungarian, Danish, Swedish, and Norwegian coins.

It is hard to place this find historically until further research is completed. There are at least two possible interpretations. It may be a treasure belonging to the society outlined by the Norse source material. Generally such finds, whether from Scandinavia, the Baltic area or Russia, are closely tied to well-established agricultural societies with considerable trade activity.

Alternatively, like the Russian scientists who published the find in 1992, one may see it as an evidence of a stronger force of Russian colonisation than previously thought.

In the 12th century, the ians established the in the estuary of the .

The main trade centre of the area at that time was , located slightly upstream where the rivers Dvina and Pinega meet. Written sources indicate that Kholmogory existed early in the 12th century, but there is no archeological material to illuminate the early history of the town. It is not known whether this settlement was originally Russian, or if it goes back to pre-Russian times. Centrally in the small town it is today, the so called Gorodok can be found, a large mound of building remains and river sand. However this has not been archeologically excavated.

Arkhangelsk came to be important in the rivalry between Norwegian and Russian interests in the northern areas. From Novgorod, the Russian interest sphere was extended far north to the in the 12th century. However, here Norway enforced taxes and rights to the fur trade. A compromise agreement entered in 1251 was soon broken.

In 1411, Yakov Stepanovitch from Novogorod went to attack Northern Norway. This was the beginning of a series of clashes, and in 1419 Norwegian ships with 500 soldiers entered the White Sea. The "Murmaners", as the Norwegians were called (cf. ), plundered many Russian settlements along the coast, among them the Archangel Michael monastery.

Novgorod managed to drive the Norwegians back. However, in 1478 the area was taken over by Ivan III and passed to with the rest of .

Trade with England, Scotland and the Netherlands

In 1555, Ivan the Terrible granted trade privileges to English merchants who founded the "Company of Merchant Adventurers" and began sending ships annually into the estuary of the Northern Dvina.

The meeting between Ivan and the Englishmen happened by chance; one of three English ships on their way to find the Northeast passage to China in 1553 ended up in the White Sea. The other two ships disappeared. Dutch merchants also started bringing their ships into the White Sea from the 1560s. Scottish and English merchants dominated in the 16th century; however, by the 17th century it was mainly the Dutch that sailed to the White Sea area.

In 1584, Ivan ordered the founding of New Kholmogory (which would later be renamed after the nearby Archangel Michael Monastery).

At the time access to the was still mostly controlled by Sweden, so while Arkhangelsk was icebound in winter, it remained 's almost sole link to the sea-trade. Local inhabitants, called s, were the first to explore trade routes to Northern as far as the trans-Ural city of and beyond.

In 1693, Peter I ordered the creation of a state in Arkhangelsk. A year later the ships "Svyatoye Prorochestvo" (Holy Prophecy), "Apostol Pavel" (Apostle Paul) and the yacht "Svyatoy Pyotr" (Saint Peter) were sailing in the White Sea. However he also realized that Arkhangelsk would always be limited as a port due to the five months of ice cover, and after a successful campaign against Swedish armies in the Baltic area, he founded in 1704.

Arkhangelsk declined in the 18th century as the Baltic trade became ever more important, but its economy revived at the end of the 19th century when a to was completed and became a major export. The city resisted rule from 1918 to 1920 and was a stronghold of the anti-Bolshevik White Army supported by the military intervention of Entente forces along an Allied expedition including Canadian and American soldiers, known as the . [cite web |url=http://info.detnews.com/history/story/index.cfm?id=178&category=life |title=Detroit's Polar Bears and their confusing war |accessmonthday=July 12, 2007 |accessyear= |publisher=The Detroit News |language=]

During both World Wars, Arkhangelsk was a major port of entry for Allied aid. During , the city became known in the West as the destination of the s bringing supplies to assist the Russians who were cut off from their normal supply lines.

Today, Arkhangelsk remains a major seaport, now open year-round due to improvements in s. The city is primarily a timber and center.

On , , 58 people were killed in an explosion at an apartment block in the city.

A maritime school, technical university, and a regional museum are located in the city. After its historical churches were destroyed during Stalin's rule, the city's main extant landmarks are the fort-like [http://www.pomor.ru/224.asp Merchant Yards] (1668–84) and the [ [http://www.fortification.ru/list/novodvinsk/ New Dvina Fortress] ] (1701–05). The Assumption Church on the Dvina embankment (1742–44) was rebuilt in 2004.

A remarkable structure is also Arkhangelsk TV Mast, a 151 metres tall guyed mast for FM-/TV-broadcasting built in 1964. This tubular steel mast has six crossbars equipped with gangways, which run in two levels from the mast structure to the crossbars. On these crossbars there are also several antennas installed ( [http://www.rtrs.ru/data/bashi_arhangelsk.jpgimage] ).

*, who became the first Russian citizen to ever win a bracelet. In 2007, and went on to come in 4th place at the WSOP main event to become the all-time leading money winner among Russian players.