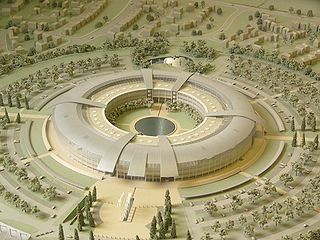 A model of GCHQ headquarters in Cheltenham, commonly nicknamed "the doughnut"[1] 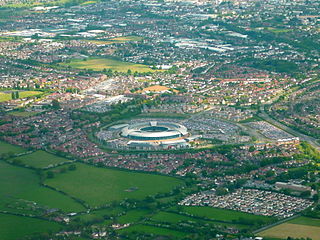 The Government Communications Headquarters (GCHQ) is a British intelligence agency responsible for providing signals intelligence (SIGINT) and information assurance to the UK government and armed forces. Based in Cheltenham, it operates under the guidance of the Joint Intelligence Committee.

CESG (originally Communications-Electronics Security Group) is the branch of GCHQ which works to secure the communications and information systems of the government and critical parts of UK national infrastructure.

GCHQ was originally established after World War I as the Government Code and Cypher School (GCCS or GC&CS), by which name it was known until 1946.

GCHQ is the responsibility of the UK Secretary of State for Foreign and Commonwealth Affairs, but it is not a part of the Foreign Office, and its Director ranks as a Permanent Secretary.

During the First World War, Britain's Army and Navy had separate signals intelligence agencies, MI1b and NID25 (initially known as Room 40) respectively.[3] In 1919, the Cabinet's Secret Service Committee, chaired by Lord Curzon, recommended that a peace-time codebreaking agency should be created, a task given to the then-Director of Naval Intelligence, Hugh Sinclair.[4] Sinclair merged staff from NID25 and MI1b into the new organisation, which initially consisted of around 25–30 officers and a similar number of clerical staff.[5] It was titled the "Government Code and Cypher School", a cover-name chosen by Victor Forbes of the Foreign Office.[6] Alastair Denniston, who had been a member of NID25, was appointed as its operational head.[4] It was initially under the control of the Admiralty, and located in Watergate House, Adelphi, London.[4] Its public function was "to advise as to the security of codes and cyphers used by all Government departments and to assist in their provision," but also had a secret directive to "study the methods of cypher communications used by foreign powers."[7] GCCS officially formed on 1 November 1919,[8] and produced its first decrypt on 19 October.[4] 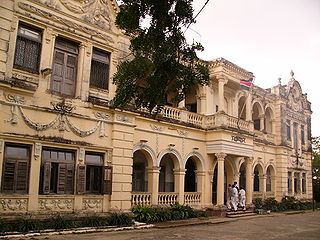 Allidina Visram school in Mombasa, pictured above in 2006, was the location of the British "Kilindini" codebreaking outpost during World War II

Before the Second World War, GCCS was a relatively small department. By 1922, the main focus of GCCS was on diplomatic traffic, with "no service traffic ever worth circulating"[9] and so, at the initiative of Lord Curzon, it was transferred from the Admiralty to the Foreign Office.[10] GCCS came under the supervision of Hugh Sinclair, who by 1923 was both the Chief of SIS and Director of GCCS.[4] In 1925, both organisations were co-located on different floors of Broadway Buildings, opposite St. James's Park.[4] Messages decrypted by GCCS were distributed in blue jacketed files that became known as "BJs".[11]

In the 1920s, GCCS was successfully reading Soviet Union diplomatic ciphers. However, in May 1927, during a row over clandestine Soviet support for the General Strike and the distribution of subversive propaganda, Prime Minister Stanley Baldwin made details from the decrypts public.[12]

An outstation in the Far East, the Far East Combined Bureau was set up in Hong Kong in 1935, and moved to Singapore in 1939. Subsequently with the Japanese advance down the Malay Peninsular, the Army and RAF codebreakers went to the Wireless Experimental Centre in Delhi, India. The Navy codebreakers in FECB went to Colombo, Ceylon, then to Kilindini, near Mombasa, Kenya.

GCCS was renamed the "Government Communications Headquarters" in June 1946.[14]

GCHQ was at first based in Eastcote, but in 1951[15] moved to the outskirts of Cheltenham, setting up two sites there — Oakley and Benhall. GCHQ had a very low profile in the media until 1983 when the trial of Geoffrey Prime, a KGB mole within GCHQ, created considerable media interest.[16]

Since the days of WWII, US and British intelligence have shared information. For the GCHQ this means that it shares information, and gets information from, the National Security Agency (NSA) in the US.[17]

Early in the 1970s, the asymmetric key algorithm was invented by staff member Clifford Cocks, a mathematics graduate: this fact was kept secret until 1997.[18]

In 1984, GCHQ was the centre of a political row when the Conservative government of Margaret Thatcher prohibited its employees from belonging to a Trade Union. It was claimed that joining such a union would be in conflict with national security. Appeals to British Courts and European Commission of Human Rights[19] were unsuccessful. Appeal to the ILO resulted in a decision that government's actions were in violation of Freedom of Association and Protection of the Right to Organise Convention.[20] The ban was eventually lifted by the incoming Labour government in 1997, with the Government Communications Group of the Public and Commercial Services (PCS) Union being formed to represent interested employees at all grades.[21] In 2000, a group of 14 former GCHQ employees, who had been dismissed after refusing to give up their union membership, were offered re-employment, which three of them accepted.[22]

Since 1994, GCHQ activities have been subject to scrutiny by Parliament's Intelligence and Security Committee. Post-Cold War, the aims of GCHQ were set out by the Intelligence Services Act 1994.[23]

At the end of 2003, GCHQ moved to a new circular HQ (popularly known as 'the Doughnut'): at the time, it was the second-largest public-sector building project in Europe, with an estimated cost of £337 million.[24] The new building, which was designed by Gensler and constructed by Carillion,[25] is the base for all of GCHQ's Cheltenham operations.

The public spotlight fell on GCHQ in late 2003 and early 2004 following the sacking of Katharine Gun after she leaked to The Observer a confidential email from agents at the American National Security Agency addressed to GCHQ agents about the wire-tapping of UN delegates in the run-up to the 2003 Iraq war.[26]

GCHQ gains its intelligence by monitoring a wide variety of communications and other electronic signals. For this, a number of stations have been established in the UK and overseas. The listening stations are at Cheltenham itself, Bude, Ascension Island, with the U.S.A., at Menwith Hill.[27] Ayios Nikolaos Station in Cyprus is run by the British Armed Forces for GCHQ.[28]

In March 2010, GCHQ was embroiled in controversy after it emerged it had lost 35 laptops, potentially containing highly sensitive national intelligence data.[29]

The Communications-Electronics Security Group (CESG) of GCHQ provides assistance to government departments on their own communications security: CESG is the UK national technical authority for information assurance, including cryptography. CESG does not manufacture security equipment, but works with industry to ensure the availability of suitable products and services, while GCHQ itself can fund research into such areas, for example to the Centre for Quantum Computing at Oxford University and the Heilbronn Institute at Bristol University.[30]

CESG runs a number of schemes such as CHECK, CLAS, and CAPS.[31]

GCHQ operates in partnership with equivalent agencies worldwide in a number of bi-lateral and multi-lateral relationships. The principal of these is with the United States (National Security Agency), Canada (Communications Security Establishment), Australia (Defence Signals Directorate) and New Zealand (Government Communications Security Bureau), through the mechanism of the UK-US Security Agreement, a broad intelligence sharing agreement encompassing a range of intelligence collection methods.

Relationships are alleged to include shared collection methods, such as the system described in the popular media as ECHELON,[32] as well as analysed product.

A controversial GCHQ case determined the scope of judicial review of prerogative powers (the Crown's residual powers under common law). This was Council of Civil Service Unions v Minister for the Civil Service [1985] AC 374 (often known simply as the "GCHQ case"). In this case, a prerogative Order in Council had been used by the prime minister (who is the Minister for the Civil Service) to ban trade union activities by civil servants working at GCHQ. This order was issued without consultation. The House of Lords had to decide whether this was reviewable by judicial review. It was held that executive action is not immune from judicial review simply because it uses powers derived from common law rather than statute (thus the prerogative is reviewable). Controversially, they also held that although the failure to consult was unfair, this was overridden by concerns of national security.

The following is a list of the heads of the operational heads of GCHQ and GCCS: