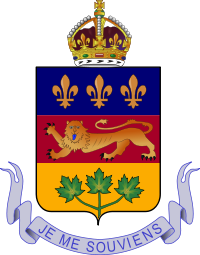 The Court of Appeal of Quebec uses the Royal Arms of the Queen in right of Quebec, commonly called the Quebec Coat of Arms, to represent the Queen as the font of justice being administered by the court. 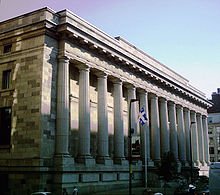 As a "Superior Court" under section 96 of the Constitution Act, 1867, Court of Appeal judges are appointed by the Governor-General of Canada (in practical terms, the Prime Minister of Canada). Appointees must be members of the Quebec Bar, but need not have had previous experience as a judge. However, appointees almost always have some experience as a judge, usually on the Superior Court of Quebec.

Under the Code of Civil Procedure of Quebec and the Criminal Code of Canada, someone wishing to appeal a decision of the Superior Court of Quebec generally has 30 days to file an appeal with the Court of Appeal. Civil cases usually must have at least $50,000 in dispute to be heard. The Court of Appeal will overrule a lower court decision if it is "incorrect" on a question of law or "patently unreasonable" on an important factual finding. The Court of Appeal almost never hears witnesses, and lawyers' oral and written submissions are kept to strict maximum lengths. A normal case will take several months from filing of an appeal to a decision by the Court of Appeal, but the Court may hear a case within hours or days in an emergency.

The ability of the Supreme Court of Canada, which has six of its nine justices from common law provinces and only three from the civil law province of Quebec, to overrule the Court of Appeal of Quebec has occasionally been raised as a political issue by Quebec nationalists[citation needed], who worry that it erodes Quebec's distinctive legal culture. (In practice, issues of civil law are heard at the Supreme Court by its three Quebec members plus two of its common law members).

Perhaps the most (in)famous decision of the Court of Appeal was Morgentaler v. The Queen (1974), in which the Court of Appeal overturned a jury decision acquitting Montreal Doctor Henry Morgentaler of performing an abortion, despite Morgentaler publicly admitting that he had done so. This was the first time in Canada that a jury acquittal had been replaced by a conviction, on appeal, rather than a new trial being ordered. The Court of Appeal was overturned by the Supreme Court of Canada in 1975. Subsequently Parliament amended the Criminal Code of Canada removing the ability of provincial courts of appeal to substitute jury acquittals with convictions.