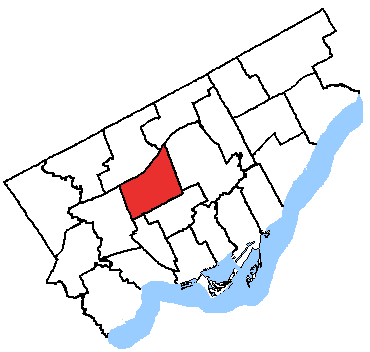 :"For the provincial electoral district, see

It covers a portion of northwest of downtown. It stretches from in the east to Caledonia in the west and from Highway 401 in the north to in the south. runs through the centre of the riding. Neighbourhoods in the riding include , , , the southwestern part of and the western part of Lawrence Park. The riding includes portions of the former city of North York and Toronto.

The federal riding was created in 1976 from parts of Eglinton, , , , and . Federally, it has been represented by Liberal since 1988. On , the western half of the riding is represented by , and the eastern portion by .

As of 1998, the ward boundaries of Toronto were standardized along the lines of the Federal and Provincial ridings. Each riding has two municipal wards. Eglinton-Lawrence encompasses wards 15 and 16.

* [http://www.parl.gc.ca/information/about/process/house/hfer/hfer.asp?Language=E&Search=Det&Include=Y&rid=204 Federal riding history from the]