Saginaw is a city in the U.S. state of Michigan and the seat of Saginaw County.[4] The city of Saginaw was once a thriving lumber town and manufacturing center.[5] Saginaw and Saginaw County lie in the Flint/Tri-Cities region of Michigan. It is located adjacent to Saginaw Charter Township and considered part of the Tri-Cities area, along with Bay City and Midland.

The site of what is presently the city of Saginaw was originally inhabited by Native Americans. The Sauk lived in the area and were driven from the area by Ojibwe (Chippewa). The name Saginaw is believed to mean "where the Sauk were" in the Ojibwe language. French missionaries and traders first appeared in the area during the late 17th century. The first permanent settlement by those other than Native Americans was in 1815 when Louis Campau established a trading post on the west bank of the Saginaw River. Shortly thereafter the United States established Fort Saginaw.

During Michigan's territorial period, a county and township government were organized at Saginaw. Growth of the settlement was fueled rapidly during the 19th century by the lumber industry. Saginaw was the site of numerous sawmills and served as a port for Great Lakes vessels. What is now the city of Saginaw resulted from the consolidation of the cities of East Saginaw and Saginaw City (West Side) in 1889.

During the 20th century, Saginaw's economy was dominated by manufacturing related to the automotive industry; most notably, manual transmission assemblies, steering gear boxes and power steering pumps. Migration from other areas, particularly the American south, swelled the population. This population growth particularly expanded the presence of African-Americans in Saginaw. The politics of the city became dominated with issues of race relations. The manufacturing presence in Saginaw declined in the latter half of the 20th century and the population diminished as well. Saginaw has faced increasing social problems relating to poverty as a result of its high rate of unemployment. Crime has been a major area of concern for the community in recent years. 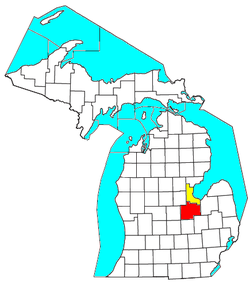 There were 23,182 households out of which 35.4% had children under the age of 18 living with them, 32.9% were married couples living together, 27.3% had a female householder with no husband present, and 34.8% were non-families. 29.5% of all households were made up of individuals and 9.9% had someone living alone who was 65 years of age or older. The average household size was 2.60 and the average family size was 3.23.

Saginaw is classified as a Home Rule City under the Michigan Home Rule Cities Act which permits cities to exercise "Home Rule" powers, among which is the power to frame and adopt its own City Charter which serves as the fundamental law of the city, in a manner similar to a Constitution for a national or state government. The present Charter was adopted in 1935 and took effect on January 6, 1936. Pursuant to the City Charter, Saginaw is governed by a nine member elected at-large Council. The term of office for a member of the City Council is four years commencing with the first meeting following a regular municipal election. The terms of Council members are staggered so that the entire Council is not subject to re-election at the same time; alternatively either four or five members are elected in each odd-numbered year.

The City of Saginaw is served by Delta College and Saginaw Valley State University, which are located in nearby University Center, Michigan and a campus of Davenport University, located in Kochville Township. Central Michigan University maintains an off-campus center inside the city that offers numerous degree programs.

The City of Saginaw is served by the Saginaw Public School District (SPSD). The district operates 14 elementary schools, 2 combined elementary/middle schools; Arthur Eddy Academy K-8, and Zilwaukee K-8, 2 middle schools; Reuben Daniels Middle School and Willie E. Thompson Middle School, and 3 high schools. The district is governed by a seven member elected board of education. The board selects a superintendent for the district. The current superintendent is Dr. Carlton Jenkins.[10] The three public high schools in Saginaw are Arthur Hill High School, Saginaw High School, and the Saginaw Arts and Sciences Academy. Michigan Lutheran Seminary is the lone private high school in the city. Charter schools in the city are North Saginaw Charter Academy, Saginaw Prep schools, and the International Academy of Saginaw. 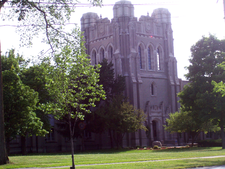 The water treatment facility in Saginaw was constructed in 1929.

The City of Saginaw gets its electricity and natural gas from Consumers Energy.

In 1929, the city opened its consolidated water works plant which replaced two separate plants that were on each side of the Saginaw river. This plant treated water brought in from the Saginaw river and piped it out to the residents as well as corner pumps for people that did not have direct connections to the system.[11] Currently, the City of Saginaw jointly owns with the City of Midland the Saginaw-Midland Municipal Water Supply Corporation. Incorporated in 1946, this water treatment system has supplied drinking and industrial water to both cities and many surrounding areas within the county.[12] Due to brackish water being in the aquifers below both cities, a 65-mile (105 km) long pipeline was constructed in 1948 to supply water from Lake Huron at White Stone Point, north of Au Gres to water treatment plants in Saginaw and Midland[11] with a second pipe added by 1996. This system has played a role in the decline of the city. The City of Saginaw, in order to obtain new sources of revenue, sold water to areas outside of the city (especially to the Saginaw Charter Township). This caused numerous businesses inside the city to leave for the surrounding areas and development in the city to stagnate. The City of Midland, however, adopted a policy of "No Annexation, No Water" which has led to the growth of the city as well as the surrounding areas.[12]

The City of Saginaw consists of many diverse neighborhoods,[13] including:

Saginaw is served primarily by two airports: MBS International Airport, located in nearby Freeland, and Bishop International Airport, located in Flint. Saginaw is also served by three smaller airports: Harry W. Browne Airport in adjacent Buena Vista Township, James Clements Municipal Airport in Bay City, and Jack Barstow Municipal Airport in Midland. In addition to the airports, Interstate 75 serves as the main arterial route for the Saginaw area while Interstate 675 provides direct access to the center of the city from Interstate 75. Interstate 69 is a nearby east-west corridor providing access to the rest of the Midwestern United States and Canada. The Saginaw River runs through the middle of the city and provides access to Saginaw Bay and the rest of the Great Lakes via docks on the northern side of the city. Historically, ships were able to move all along the length of the river inside the city but fixed bridges being built over the river closed access south of the northern docks. In the city and surrounding areas, mass transit is provided by bus under the authority of the Saginaw Transit Authority Regional Services (STARS) system.[22] The STARS system connects to Bay City's Bus system at Saginaw Valley State University.

Castle Museum (Saginaw) is on the National Register of Historic Places.

The city's main entertainment can be found in the downtown area, where places such as the Children's Zoo, The Dow Event Center and the restored Temple Theatre offer live entertainment. The Dow Event Center is also home to the city's junior ice hockey team, the Saginaw Spirit of the Ontario Hockey League as well as The Saginaw Sting, an indoor football team. The downtown area, which contains a number of office buildings from the late 19th century and early 20th century, is located near the Saginaw Club, a local businessmen's club founded in 1889, and the Saginaw Center, an educational complex run by Delta College. Once vibrant, the downtown area has been in decline in recent years and presently struggles with blight. Downtown is not to be confused with the Old Town/West Side City area located on the other side of the river and about one mile (1.6 km) south. Old Town houses many popular bars, locally owned restaurants, and arts organizations.

The Saginaw area is home to two professional sports teams as well as one NCAA Division-II school that has various sports programs. The Saginaw Spirit is an Ontario Hockey League team that became nationally known when television personality Stephen Colbert promoted the team on his show, The Colbert Report.[24] The Saginaw Sting is an indoor football team that formed in 2007 to play in Saginaw beginning in the 2008 season.[25] At the collegiate level, Saginaw Valley State University competes in numerous sports such as American Football, Basketball, and Volleyball.[26]

The area's main shopping district is located in neighboring Saginaw Township along Bay Rd. and Tittabawassee Road north of town, where several big box stores can be found. Also in the same area is Fashion Square Mall, a regional shopping mall anchored by JCPenney, Macy's, and Sears. There are also many restaurants in this part of town, primarily regional chains.

Primary shopping areas inside the city of Saginaw include Old Town and downtown.

Saginaw is part of Nielsen's Flint-Saginaw-Bay City-Midland Designated Market Area which is the 66th largest market in the United States for Television Viewers.[27] Saginaw is the home of CBS affiliate WNEM which maintains its studios and offices inside the City though its license is for Bay City, MI.[28] ABC affiliate WJRT maintains its offices and newsrooms in Saginaw while its studios are in its community of license, Flint.[29] Only NBC affiliate WEYI and Christian station WAQP have the City of Saginaw as their city of record but both maintain their facilities outside of the city.[30][31] Charter Communications operates a cable television network servicing the City of Saginaw under a franchise agreement.

Radio stations licensed within the immediate Saginaw area (Saginaw County) are listed. Many locations in the City of Saginaw also receive stations from Bay City, Midland, Flint, and Lansing.

The Andersen Enrichment Center and Lucille E. Andersen Memorial Rose Garden are part of the Saginaw's park system. These locations are used to host private and public events throughout the year. Past events have included, Hollyday Art Fair [32] and a World AIDS Day service[33] The garden includes a fountain with a sculpture by Marshall Fredericks.

The Saginaw Art Museum hosts temporary exhibitions and permanent collections. The museum also houses The John and Michele Bueker Research Library and Archives of Michigan Art. The museum originated as the home of C.L. Ring who commissioned Charles A. Platt to design the house and gardens. The museum opened to the public in 1948. The museum is a Smithsonian Institution affiliate.[34]

When it comes to the historical aspects of Saginaw, no place shows it off as well as the Castle Museum of Saginaw County History. The museum is housed in a former post office which was built to resemble a castle, and honors the French heritage of the area. With over 100,000 artifacts in their collection, the Historical Society of Saginaw County displays items from their collection as well as traveling exhibits.[35]

Saginaw in popular culture and literature