Ilford F.C. is a London football club based in Ilford, in Greater London founded in 1987.

There was an earlier famous non-league club of the same name, founded in 1881. In 1979, it merged with Leytonstone to create Leytonstone/Ilford, a precursor to Dagenham & Redbridge.

The first Ilford F.C. were a famous amateur side, founded in 1881 playing in the Southern League and FA Amateur Cup. They played at Lynn Road in Newbury Park, until they merged with Leytonstone to form Leytonstone and Ilford in 1979, the ground being sold to make way for a housing development Dellow Close (named after R Dellow - an Ilford FC player of the 1930s). They played in Granleigh Road by the railway arches. The Lynn Road ground was used for two football matches in the 1948 Summer Olympics, France v India and Turkey v Yugoslavia.

The current incarnation of Ilford F.C. was formed in 1987 and first played in the Spartan League. They dropped out of this league in 1991, rejoined in 1993, but dropped out again after one season.

In 1996 the club resurfaced in the Essex Senior League, where they played until 2004 when a second-place finish was enough to gain them entry to the Isthmian League Division Two, where they were champions at the very first attempt. Due to a realignment of the English football league system they were placed in the Southern League Eastern Division for the 2005-06 season, but after further realignment found themselves back in the Isthmian League for 2006-07, this time playing in Division One North. The team was in the relegation zone of the Isthmian League First Division North at the end of the season, but were offered a reprieve from relegation, after Enfield resigned from the league. They finished in the relegation zone again in 2007-08 but received another reprieve after the resignation of Edgware Town. The following season was Ilford's best season since reforming in 1987, with a finish of 17th recorded under the leadership of former player and reserve manager Chris Wood. On the 12th October 2009 after a 0-3 defeat at home to VCD Athletic Chris Woods resigned as manager ending a ten year association with the club, Assistant Manager Colin Walton and coach Michael Thompson were soon after appointed to continue on an interim basis until the end of the season. 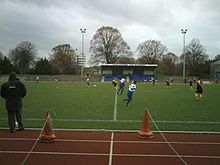 Cricklefield Stadium is a multi-use stadium located on High Road, Seven Kings, Ilford IG1. The stadium holds 3,500 people. The stadium was built in 1923. It is also home to an athletics club. The ground consists of three fully terraced sides, one side housing a small covered terrace which is set just behind the dugouts. The main stand is opposite which has a press box and directors seating accommodating 216 fully covered. Behind one goal is the largest open terrace. A tea bar is open on matchdays. With ample parking if using the High Road entrance to the ground. The ground boasts an elevated indoor viewing area from the excellent bar area. 1st Team Home matchdays Wednesdays(7.45pm), Saturdays(3pm), with Ilford Under 18's at Home on Sundays(1.30pm). Admission to the ground includes a matchday programme. Turnstiles open 1 hour before kick off times.

It hosted some of the football preliminaries for the 1948 Summer Olympics.[1]