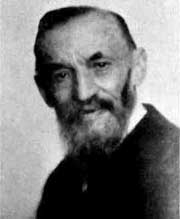 Giuseppe Peano (, &ndash; , ) was an Italian , whose work was of exceptional philosophical value. The author of over 200 books and papers, he was a founder of and , to which he contributed much notation. The standard axiomatization of the s is named in his honor. He spent most of his career teaching mathematics at the .

Peano was born and raised on a farm at Spinetta, a hamlet near , , . He enrolled at the in 1876, graduating in 1880 with high honours, after which the University employed him to assist first , and then , the Chair of infinitesimal calculus. Due to Genocchi's poor health, Peano took over the teaching of the infinitesimal calculus course within 2 years. His first major work, a textbook on calculus, was published in 1884 and was credited to Genocchi. Three years later, Peano published his first book dealing with mathematical logic. Here the modern symbols for the union and intersection of sets appeared for the first time.Fact|date=October 2007

In 1887, Peano married Carola Crosio, the daughter of the Turin-based painter , known for painting the " Madonna". In 1886, he began teaching concurrently at the Royal Military Academy, and was promoted to Professor First Class in 1889. The next year, the University of Turin also granted him his full professorship. Peano's famous appeared in 1890 as a . He used it to show that a continuous curve cannot always be enclosed in an arbitrarily small region. This was an early example of what came to be known as a .

The following year Peano started the . It was to be an "Encyclopedia of Mathematics", containing all known formulae and theorems of mathematical science using a standard notation invented by Peano. In 1897, the first was held in . Peano was a key participant, presenting a paper on mathematical logic. He also started to become increasingly occupied with "Formulario" to the detriment of his other work.

In 1898 he presented a note to the Academy about binary numeration and its ability to be used to represent the sounds of languages. He also became so frustrated with publishing delays (due to his demand that formulae be printed on one line) that he purchased a printing press.

was the venue for the Second in 1900. The conference was preceded by the First where Peano was a member of the patronage committee. He presented a paper which posed the question of correctly formed definitions in mathematics, "i.e." "how do you define a definition?". This became one of Peano's main philosophical interests for the rest of his life. At the conference Peano met and gave him a copy of "Formulario". Russell was so struck by Peano's innovative logical symbols that he left the conference and returned home to study Peano's text.

Peano's followers presented papers (using Peano's teachings) at the mathematics conference, but Peano did not. A resolution calling for the formation of an "international auxiliary language" to facilitate the spread of mathematical (and commercial) ideas, was proposed; Peano fully supported it.

By 1901, Peano was at the peak of his mathematical career. He had made advances in the areas of analysis, foundations and logic, made many contributions to the teaching of calculus and also contributed to the fields of s and vector analysis. Peano played a key role in the of mathematics and was a leading pioneer in the development of mathematical logic. Peano had by this stage become heavily involved with the "Formulario" project and his teaching began to suffer. In fact, he became so determined to teach his new mathematical symbols that the calculus in his course was neglected. As a result he was dismissed from the Royal Military Academy but retained his post at Turin University.

In 1903 Peano announced his work on an international auxiliary language called "" (" without flexions," later called Interlingua, but which should not be confused with the later of the IALA). This was an important project for him (along with finding contributors for 'Formulario'). The idea was to use Latin vocabulary, since this was widely known, but simplify the grammar as much as possible and remove all irregular and anomalous forms to make it easier to learn. In one speech, he started speaking in Latin and, as he described each simplification, introduced it into his speech so that by the end he was talking in his new language.

1908 was a big year for Peano. The fifth and final edition of the "Formulario" project, titled "Formulario Mathematico", was published. It contained 4200 formulae and theorems, all completely stated and most of them proved. The book received little attention since much of the content was dated by this time. However, it remains a significant contribution to mathematical literature. The comments and examples were written in "Latino sine flexione".

Also in 1908, Peano took over the chair of higher analysis at Turin (this appointment was to last for only two years). He was elected the director of "". Having previously created , the Academy effectively chose to abandon it in favor of Peano's .

After his mother died in 1910, Peano divided his time between teaching, working on texts aimed for secondary schooling including a dictionary of mathematics, and developing and promoting his and other s, becoming a revered member of the international auxiliary language movement. He used his membership of the "" to present papers written by friends and colleagues who were not members (the Accademia recorded and published all presented papers given in sessions).

In 1925 Peano switched Chairs unofficially from Infinitesimal Calculus to Complementary Mathematics, a field which better suited his current style of mathematics. This move became official in 1931. Giuseppe Peano continued teaching at Turin University until the day before he died, when he suffered a fatal heart attack.