One Night Stand (2008)[3] was a professional wrestling pay-per-view (PPV) event produced by World Wrestling Entertainment (WWE) that took place on June 1, 2008 at the San Diego Sports Arena in San Diego, California. It was the fourth and final event promoted under the One Night Stand name. The event featured talent from the Raw, SmackDown, and ECW brands.

The main match on the SmackDown! brand was a Tables, Ladders, and Chairs match for the vacant World Heavyweight Championship between Edge and The Undertaker, which Edge won after retrieving the belt suspended above the ring. Per the pre-match stipulation, Undertaker was forced to leave the WWE.[4] The predominant match on the Raw brand was a Last Man Standing match for the WWE Championship between Triple H and Randy Orton, which Triple H won after Orton failed to answer the ten-count.[5]

The primary match on the ECW brand was a Singapore Cane match involving The Big Show, CM Punk, John Morrison, Chavo Guerrero, and Tommy Dreamer. Big Show won the match after pinning Dreamer to become the number-one contender to the ECW Championship at Night of Champions.[6] Featured matches on the undercard included Shawn Michaels versus Batista in a Stretcher match,[7] and John Cena versus John "Bradshaw" Layfield in a First Blood match.[8] 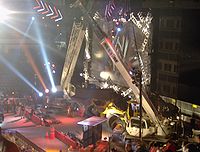 Stage setup for One Night Stand.

Another feud heading into One Night Stand, was between Shawn Michaels and Batista. The feud began after Batista expressed his remorse over the retirement of Ric Flair at WrestleMania, which was caused by Michaels getting the pinfall over Flair in Flair's career threatening match.[10] During the rivalry, a match between Batista and Michaels took place at Backlash, with Chris Jericho as the special guest referee. At the end of the match, Michaels appeared to suffer a knee injury, lowering Batista's guard until Michaels sprang up to perform Sweet Chin Music on him and defeated him by pinfall.[11] In following weeks, Batista and Jericho remained skeptical about Michaels' injury, then Michaels admitted to Jericho that he'd staged the injury on the May 12 edition of Raw. Batista defeated Jericho on the May 19, 2008 episode of Raw to earn the right to face Michaels at One Night Stand in a Stretcher match.[9]

The main feud heading into One Night Stand on the ECW brand was between CM Punk, Chavo Guerrero, Tommy Dreamer, John Morrison and The Big Show. On the May 20 edition of ECW, General Manager Armando Estrada announced a Fatal Four-Way, Singapore Cane on a pole match, for One Night Stand featuring Punk, Guerrero, Dreamer, and Morrison, where the winner would receive an ECW Championship match against the ECW Champion Kane at Night of Champions. Later that night, the team of Guerrero and Morrison defeated the team of Dreamer and Punk in a tag team match. After the match, however, Big Show attacked all four superstars. Big Show then announced that he would also compete in the match One Night Stand, making it a five-man Singapore Cane match.[12]

The opening match of the night was Jeff Hardy vs. Umaga in a Falls Count Anywhere match. Both men took advantage of the stipulation battling around the arena, which included Hardy sliding down a stair rail and hitting Umaga. Both men continued to fight to the outside into a car park. The match ended when Hardy hit a Swanton Bomb on Umaga off a truck and scored a pinfall victory.

The third match of the pay-per-view was the First Blood match between JBL and John Cena. Both men tried their best to get their opponent to bleed first by utilizing steel steps, the steel barricade and chairs. The match ended when Cena got tied up in the ring ropes & JBL claimed a bullwhip to use on Cena, but Cena gave him a low-blow and then used a steel chain to pull JBL's neck back, a move Cena calls the STF. That drew first blood. John Cena was the winner.

The "I Quit!" match was next contested between Melina and Beth Phoenix. Both used very creative and sharp submissions to make their opponent say the words "I Quit". Beth Phoenix won the match after a Glam Slam, and a very powerful submission pulling Melina's body back, thus, making Melina say "I Quit". It is also the first Divas "I Quit!" match in WWE history.

The following match was a Last Man Standing match for the WWE Championship between the champion, Triple H, and the challenger, Randy Orton. Both men started the match with hard strikes trying to keep each other down. Orton hit Triple H with a DDT off the announcer's table but only kept Triple H down for a 9 count. Orton then hit Triple H with the steel ring steps, but only got a 2 count. Orton tried to choke Triple H with a cable but failed. Following this, Orton tried to execute the RKO on Triple H, but was countered with Triple H pushing him over the top rope. Orton then landed on the outside, but on his collarbone, which was broken legitimately. Orton could not answer the 10 count and as a result Triple H won the match and retained the WWE Championship.

The feud with Edge and The Undertaker continued to SummerSlam. After Edge banished The Undertaker from the WWE, CM Punk cashed in his Money in the Bank contract on June 30, and defeated Edge for the World Heavyweight Championship. During the wedding of Edge and Vickie Guerrero, Triple H came and showed a video with Edge cheating on Vickie with Alicia Fox. Vickie became angry and started to hit Edge. After failing to win the WWE Championship, Vickie Guerrero revealed that she had rehired The Undertaker on SmackDown and booked a Hell in a Cell match at SummerSlam. At the PPV, Undertaker defeated Edge and after the match, Undertaker chokeslamed Edge through the wrestling ring with fire coming out of it soon after.

After Randy Orton broke his collar bone, Triple H would later defend his WWE Championship at Night of Champions, by defeating John Cena. On June 23, Triple H was drafted to SmackDown and started a feud with Edge. He would later defeated Edge at the Great American Bash for the WWE Championship. After defending the title against The Great Khali, Jeff Hardy, and Vladimir Kozlov, Triple H finally lost it to Edge at Survivor Series in a Triple Threat Match involving Kozlov. One month later, at Armageddon, Edge defended the championship in a Triple Threat match, which was won by Jeff Hardy.