The operating point of a device, also known as bias point, quiescent point, or Q-point, is the point on the output characteristics that shows the DC collector–emitter voltage (Vce) and the collector current (Ic) with no input signal applied. The term is normally used in connection with devices such as transistors.

Signal requirements for Class A amplifiers

For analog operation of a Class A amplifier, the Q-point is placed so the transistor stays in active mode (does not shift to operation in the saturation region or cut-off region) when input is applied. For digital operation, the Q-point is placed so the transistor does the contrary - switches from "on" to "off" state. Often, Q-point is established near the center of active region of transistor characteristic to allow similar signal swings in positive and negative directions. Q-point should be stable. In particular, it should be insensitive to variations in transistor parameters (for example, should not shift if transistor is replaced by another of the same type), variations in temperature, variations in power supply voltage and so forth. The circuit must be practical: easily implemented and cost-effective.

At constant current, the voltage across the emitter–base junction VBE of a bipolar transistor decreases 2 mV (silicon) and 1.8mV (germanium) for each 1 °C rise in temperature (reference being 25 °C). By the Ebers–Moll model, if the base–emitter voltage VBE is held constant and the temperature rises, the current through the base–emitter diode IB will increase, and thus the collector current IC will also increase. Depending on the bias point, the power dissipated in the transistor may also increase, which will further increase its temperature and exacerbate the problem. This deleterious positive feedback results in thermal runaway.[1] There are several approaches to mitigate bipolar transistor thermal runaway. For example,

The circuits below primarily demonstrate the use of negative feedback to prevent thermal runaway.

Types of bias circuit for Class A amplifiers 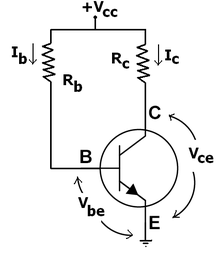 This form of biasing is also called base bias. In the example image on the right, the single power source (for example, a battery) is used for both collector and base of a transistor, although separate batteries can also be used.

In the given circuit,

For a given transistor, Vbe does not vary significantly during use. As Vcc is of fixed value, on selection of RB, the base current IB is fixed. Therefore this type is called fixed bias type of circuit.

Also for given circuit,

The common-emitter current gain of a transistor is an important parameter in circuit design, and is specified on the data sheet for a particular transistor. It is denoted as β on this page.

we can obtain IC as well. In this manner, operating point given as (Vce,IC) can be set for given transistor.

Due to the above inherent drawbacks, fixed bias is rarely used in linear circuits (i.e., those circuits which use the transistor as a current source). Instead, it is often used in circuits where transistor is used as a switch. However, one application of fixed bias is to achieve crude automatic gain control in the transistor by feeding the base resistor from a DC signal derived from the AC output of a later stage. 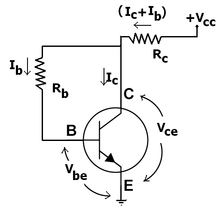 This configuration employs negative feedback to prevent thermal runaway and stabilize the operating point. In this form of biasing, the base resistor RB is connected to the collector instead of connecting it to the DC source Vcc. So any thermal runaway will induce a voltage drop across the RC resistor that will throttle the transistor's base current.

From Kirchhoff's voltage law, the voltage

across the base resistor Rb is

From Ohm's law, the base current

Hence, the base current Ib is

If Vbe is held constant and temperature increases, then the collector current Ic increases. However, a larger Ic causes the voltage drop across resistor Rc to increase, which in turn reduces the voltage

which is the case when

Usage: The feedback also decreases the input impedance of the amplifier as seen from the base, which can be advantageous. Due to the gain reduction from feedback, this biasing form is used only when the trade-off for stability is warranted. 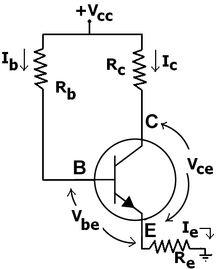 The fixed bias circuit is modified by attaching an external resistor to the emitter. This resistor introduces negative feedback that stabilizes the Q-point. From Kirchhoff's voltage law, the voltage across the base resistor is

From Ohm's law, the base current is

Similarly, if the transistor is replaced by another, there may be a change in IC (corresponding to change in β-value, for example). By similar process as above, the change is negated and operating point kept stable.

For the given circuit,

The circuit has the tendency to stabilize operating point against changes in temperature and β-value.

which is approximately the case if

The feedback also increases the input impedance of the amplifier when seen from the base, which can be advantageous. Due to the above disadvantages, this type of biasing circuit is used only with careful consideration of the trade-offs involved. 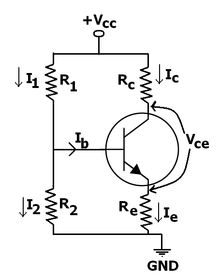 The voltage divider is formed using external resistors R1 and R2. The voltage across R2 forward biases the emitter junction. By proper selection of resistors R1 and R2, the operating point of the transistor can be made independent of β. In this circuit, the voltage divider holds the base voltage fixed independent of base current provided the divider current is large compared to the base current. However, even with a fixed base voltage, collector current varies with temperature (for example) so an emitter resistor is added to stabilize the Q-point, similar to the above circuits with emitter resistor.

In this circuit the base voltage is given by:

For the given circuit,

which is approximately the case if

where R1 || R2 denotes the equivalent resistance of R1 and R2 connected in parallel.

The circuit's stability and merits as above make it widely used for linear circuits. 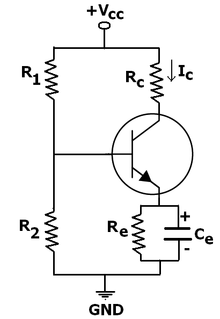 The standard voltage divider circuit discussed above faces a drawback - AC feedback caused by resistor RE reduces the gain. This can be avoided by placing a capacitor (CE) in parallel with RE, as shown in circuit diagram.

This capacitor is usually chosen to have a low enough reactance at the signal frequencies of interest such that RE is essentially shorted at AC, thus grounding the emitter. Feedback is therefore only present at DC to stabilize the operating point, in which case any AC advantages of feedback are lost.

Of course, this idea can be used to shunt only a portion of RE, thereby retaining some AC feedback. 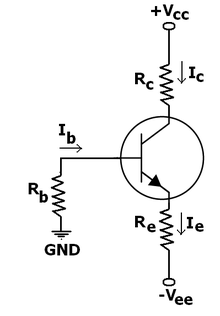 When a split supply (dual power supply) is available, this biasing circuit is the most effective, and provides zero bias voltage at the emitter or collector for load. The negative supply VEE is used to forward-bias the emitter junction through RE. The positive supply VCC is used to reverse-bias the collector junction. Only two resistors are necessary for the common collector stage and four resistors for the common emitter or common base stage.

If RB is small enough, base voltage will be approximately zero. Therefore emitter current is,

The operating point is independent of β if RE >> RB/β

This type can only be used when a split (dual) power supply is available.

Class B and AB amplifiers 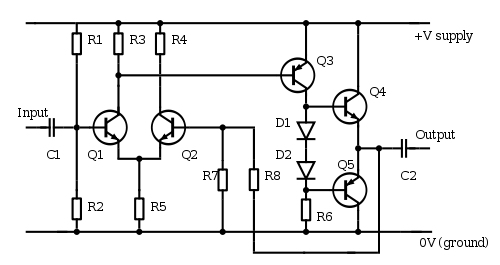 Q3 is a common emitter stage that provides amplification of the signal and the DC bias current through D1 and D2 to generate a bias voltage for the output devices. The output pair are arranged in Class AB push–pull, also called a complementary pair. The diodes D1 and D2 provide a small amount of constant voltage bias for the output pair, just biasing them into the conducting state so that crossover distortion is minimized. That is, the diodes push the output stage into class-AB mode (assuming that the base-emitter drop of the output transistors is reduced by heat dissipation).

This design automatically stabilizes its operating point, since overall feedback internally operates from DC up through the audio range and beyond. The use of fixed diode bias requires the diodes to be both electrically and thermally matched to the output transistors. If the output transistors conduct too much, they can easily overheat and destroy themselves, as the full current from the power supply is not limited at this stage.

A common solution to help stabilize the output device operating point is to include some emitter resistors, typically an ohm or so. Calculating the values of the circuit's resistors and capacitors is done based on the components employed and the intended use of the amplifier.