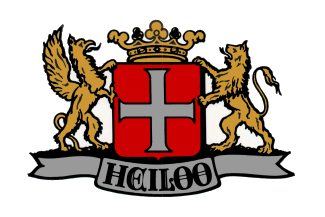 Heiloo (From the Dutch "heilige loo", "sacred forest") was given its name because was said to have performed a miracle there around 690. The village has a town hall dating from 1926 and a chapel from the 12th century known as the "Onze Lieve Vrouwe ter Nood". In the 1950s and 1960s the population grew quickly as many residents of Amsterdam moved to the area. The village is near the city of where many residents work and attend school.

The municipal council of Heiloo consists of 19 seats, which are divided as follows:

Heiloo is connected to the Dutch railway network by . From this station there are many destinations available such as: , , , , , , , , , , and .For the , you should travel to Uitgeest and change onto a train to Koog-Zaandijk

There used to be a second station between Heiloo and . This was only in use to bring s to a nearby . The name of both station and chapel was 'Onze lieve vrouwe ter nood' or 'Our Lady to Need'; the station was known as Runxputte until 1914. It was never officially closed, but part of the platforms was demolished in 1997. [ [http://stationsweb.brinkster.net/station.asp?station=olvternood tijdelijke halte Onze Lieve Vrouwe ter Nood - foto's en omschrijving op stationsweb ] ]