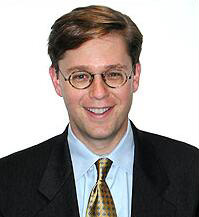 Kevin Jeffrey Martin (born ) is the Chairman of the . He was nominated to be a commissioner by President on , and was confirmed on . On , President Bush designated him as FCC chairman, to replace . President Bush renominated Martin to a new five year term on the Commission on , and he was reconfirmed by the U.S. Senate on .

Before becoming a commissioner, Martin was a for Economic Policy. He has also served as the Deputy General Counsel to Bush-Cheney 2000, on the Bush-Cheney recount team in , and on the Presidential Transition.

Upon graduation from law school, Martin served as a judicial clerk for Judge of the U.S. District Court for the Southern District of Florida in .

Martin earned a B.A. from the (where he was elected student body president), a Master's degree in from , and a J.D. from . He is a member of the , and the . Chairman Martin married a Harvard law school classmate, Catherine J. Martin (Cathie). Following law school, Cathie practiced law as an associate of Steptoe & Johnson in Washington, and then held the following positions in public service: Counselor to then Texas Attorney General John Cornyn; Deputy Chief of Staff for Secretary Donald L. Evans at the U.S. Department of Commerce; Counselor to Vice President , and Special Assistant to the President for Economic Policy at the National Economic Council. She currently serves as Deputy Assistant to the President for Communications (Policy and Planning). Kevin and Cathie reside in

On December 3, 2007, (D) of the House Commerce Committee sent a letter to Martin stating that "given several events and proceedings over the past year, I am rapidly losing confidence that the commission has been conducting its affairs in an appropriate manner." Martin is under investigation for a lack of transparency in FCC proceedings as well as an abuse of his power in relation to cable industry regulations. He has also been accused of keeping his fellow commissioners in the dark in an attempt to push through policy. Dingell further commented that this, his cable industry proceedings, as well as an attempt to relax the newspaper-broadcast cross-ownership ban "lead to larger concerns as to the inclination and ability of the commission to perform its core mission: the implementation of federal law to serve the public interest." [cite web | url=http://www.variety.com/article/VR1117976951.html?categoryid=22&cs=1| title=Congressional probe targets Martin |work=| accessdate=2007-12-04]