Motorcycle fairing
This article is about motorcycle design. For other uses of "fairing", see Fairing (disambiguation). 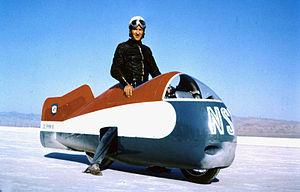 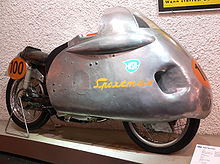 A motorcycle fairing is a shell placed over the frame of some motorcycles, especially racing motorcycles and sport bikes, with the primary purpose to reduce air drag. The secondary functions are the protection of the rider from airborne hazards and wind-induced hypothermia and of the engine components in the case of an accident. There may be a front fairing, as well as a rear fairing component. A motorcycle windshield may be an integral part of the fairing.[1]

The major benefit of a fairing on sport touring and touring motorcycles is a reduction in fuel consumption.[2] The reduction in aerodynamic drag allows for taller gearing, which in turn increases engine life.

The term fairing came into use in aircraft aerodynamics with regard to smoothing airflow over a juncture of components where airflow was disrupted. Early streamlining was often unsuccessful resulting in instability. Handlebar fairings, such as those on Harley-Davidson Tourers, sometimes upset the balance of a motorcycle, inducing wobble.[3] The first factory installed full fairing was that installed on the BMW R100RS introduced in 1976.[4] This marked the beginning of widespread adoption of fairings on sports, and touring types of motorcycles.

Originally the fairings were cowlings put around the front of the bike, increasing its frontal area. Gradually they had become an integral part of the design. Modern fairings increase the frontal area at most by 5% compared to a naked machine. Fairing may carry headlights, instruments, and other items. If the fairing is mounted on the frame, mounting equipment on the fairing reduces the weight and rotational inertia of the steering assembly, improving the handling.[5] 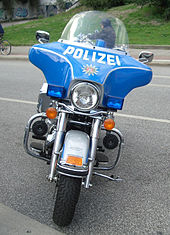 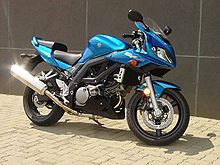 Suzuki SV650s with half fairing and an aftermarket belly pan.

Acrylonitrile butadiene styrene (ABS) plastic is commonly used in original equipment sport bikes and certain aftermarket fairing manufacturers due to its strong, flexible and light weight properties. The advantage of ABS over other plastics is that it combines the strength and rigidity of acrylonitrile and styrene with the toughness of polybutadiene rubber. The proportions of each property vary based on the targeted result.

There are two common methods of producing ABS plastic fairing: injection and compression.

Fiberglass is made of woven fibers, and is used as a reinforcing agent for many polymer products. The composite properly known as glass-reinforced plastic (GRP), is normally referred to by the name of its reinforcing material. Fiberglass fairings are commonly used on the race track. In most cases fiberglass is lighter, and more durable than ABS Plastic. Damaged fiberglass can be repaired by applying new layers of woven fiberglass cloth mixed with a polymer such as epoxy, over the damaged area followed sanding and finishing.

Carbon-fiber-reinforced polymer is the lightest, but most expensive, fairing material. It is used on the most extreme sport and racing motorcycle fairings.[8]