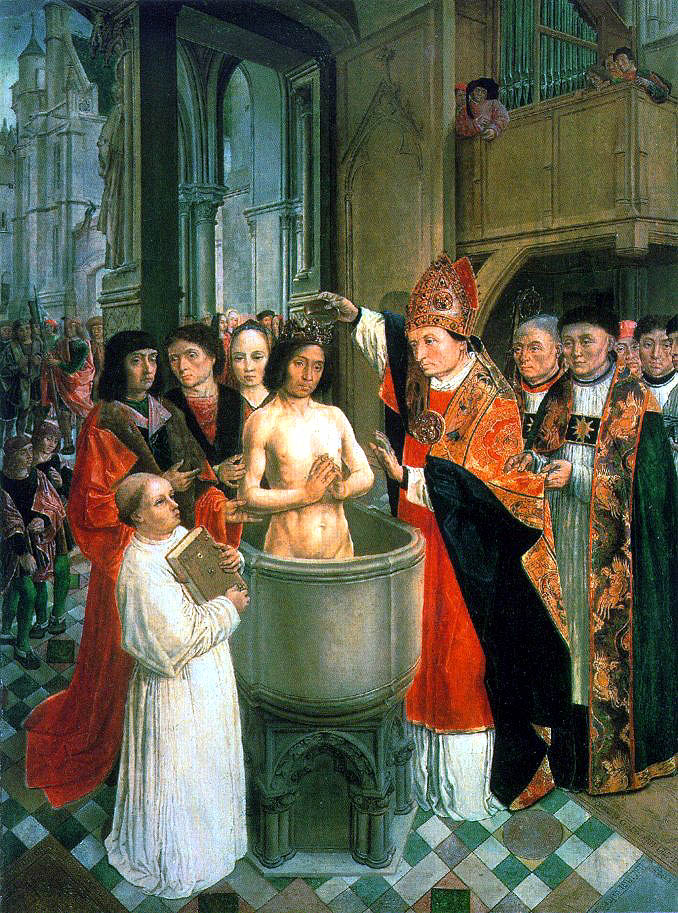 Saint Remigius ( _fr. Saint Rémi or Saint Rémy; _it. Remigio; _es. Remigio; _oc. Romieg; _pl. Remigiusz; and _br. Remig), was and Apostle of the , (c. – , ). St Remigius effected the conversion to of , King of the Franks, on eve, in the year , one of the turning points in the success of the Roman Catholic Faith and a climactic moment in European history.

Remigius was born, traditionally at , near , , into the highest levels of society. He is said to have been the son of Emilius, count of Laon (who is not otherwise attested) and of Celina, daughter of the , which Clovis had conquered in 486. He studied at Reims and soon became so noted for his learning and sanctity, in addition to his high status, that he was elected in his twenty-second year, though still a layman. [ [http://www.newadvent.org/cathen/12763b.htm Catholic Encyclopedia: "St. Remigius"] ]

The story of the return of the sacred vessels (most notably the ), which had been stolen from the church of Soissons testifies to the friendly relations existing between him and Clovis, King of the Franks, whom he converted to Christianity with the assistance of Saint Vedast (Vedastus, Vaast, Waast) and Saint Clotilde, the Burgundian princess who was wife to Clovis. Even before he embraced Christianity, Clovis had showered benefits upon Remigius and the Christians of Reims, and after his victory over the in the (probably 496), he requested Remigius to baptize him at Reims (, ) in the presence of a large company of Franks and Alamanni: according to Saint Gregory of Tours, 3,000 Franks were baptized with Clovis. [The legend of the ampulla of holy oil that was used to anoint the kings crowned at Reims originated after St Remigius' time, with Bishop of Reims.]

King Clovis granted Remigius stretches of territory, in which the latter established and endowed many churches. He erected bishoprics at ; ; , where he personally ordained the first bishop in 499; , where he installed St. Vedast; and Laon, which he gave to his niece's husband Gunband. In 530 he consecrated , . Remigius' brother Principius was and also corresponded with , whose letters give a sense of the highly cultivated courtly literary Gallo-Roman style all three men shared. [ [http://www.tertullian.org/fathers/sidonius_letters_09book9.htm Book IX, p. viii] ] The chroniclers of "" record that numerous donations were made to Remigius by the Frankish nobles, which he presented to the cathedral at Reims.

Though Remigius never attended any of the church councils, in 517 he held a synod at Reims, at which after a heated discussion he converted a bishop of Arian views. Although St Remigius's influence over people and prelates was extraordinary, upon one occasion his condoning of the offences of one Claudius, a priest whom Remigius had consecrated, brought upon him the rebukes of his episcopal brethren, who deemed Claudius deserving of degradation. The reply of Remigius, still extant, is able and convincing.

Few authentic works of Remigius remain: his "Declamations" were elaborately admired by Sidonius Apollinaris, in a finely-turned letter to Remigius, but are now lost. [ [http://www.tertullian.org/fathers/sidonius_letters_09book9.htm Book IX, p. vii] ] Four letters survive: one containing his defence in the matter of Claudius, two written to Clovis, and a fourth to Bishop Falco of . The "Testament of St. Remigius" is apocryphal. A brief and strictly legendary "Vita" was formerly ascribed to . Another, according to , was written by . [, The , October 1: "St. Remigius." ] A letter congratulating upon his election (523) is apocryphal, and "the letter in which Pope Hormisdas appears to have appointed him vicar of the kingdom of Clovis is proved to be spurious; it is presumed to have been an attempt of Hincmar to base his pretensions for the elevation of Reims to the primacy, following the alleged precedent of Remigius." [ [http://www.ccel.org/s/schaff/encyc/encyc09/htm/iv.vii.clii.htm Philip Schaff, "The New Schaff-Herzog Encyclopedia of Religious Knowledge," entry by A. Hauck] ]

A Commentary on the Pauline Epistles (edited Villalpandus, 1699) is not his work, but that of . [Encyclopaedia Britannica" 1911] St Remigius' relics were kept in the Cathedral of Reims, whence Hincmar had them translated to during the invasions and thence, in 1099, at the instance of , to the . His feast is celebrated on .