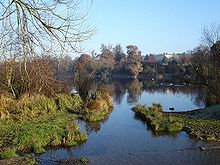 Mote Park lake with Mote House in the distance

Mote Park is a 180 hectare multi-use public park in Maidstone, Kent. Previously a country estate it was converted to landscaped park land at the end of the 18th century before becoming a municipal park. It includes the former stately home Mote House together with a miniature railway, pitch and putt golf course and a boating lake. The park has also been used as a cricket ground for the Kent County Cricket Club. Mote House is set in 450 acres (1.8 km2) of garden landscape and consists of 85 houses and apartments.[1]

The park's name is derived from 'moot' or 'mote' in Old English meaning "a place of assembly".[2][3] Its proximity to nearby Penenden Heath (the site of shire moots during the Middle Ages) indicates that it may once have formed part of an administrative region in central Kent.

In the 13th century, the "mote" lands were incorporated into the manor of local landowners and a manor house in the area of the present-day park is described as being castellated (or fortified) with emparked grounds. This is believed to indicate the area was used as a one of the earliest deer parks in Kent.[4][5][6]

The park is incorporated into royal history as a possession of King Edward IV's consort, Elizabeth Woodville (daughter of Richard Woodville, 1st Earl Rivers) and was later raided by Richard Neville, 16th Earl of Warwick angered by the King's marriage. The Woodville family continued to lay claim to the land despite various interventions during the reign of Richard III and Henry VII. On 17 July 1531, Henry VIII and Anne Boleyn visited it, before their marriage.[7] Passing to Thomas Wyatt the younger, the estate again returned to the Crown under Queen Elizabeth I before finally passing, in 1690 to the Marsham family, who would later become the Lords Romney.[5]

Under the ownership of the Marsham family, the estate was considerably improved.[6] The grounds were laid out in the so-called Anglo-Dutch style illustrated in an engraving by Johannes Kip in 1750. 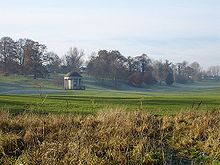 In 1799, King George III and Prime Minister William Pitt visited the property to inspect around 3,000 assembled troops of the Kent Volunteers, a local militia trained to defend the county from a possible invasion by Napoleon I of France. A Doric-style temple was constructed to commemorate the occasion.[3][8][9][10]

Between 1793 and 1800 the original Mote House was demolished and a new mansion constructed, designed by Daniel Asher Alexander.[11] At the same time the River Len was dammed to form a lake. The addition of internal roadways, walls, a boathouse and a bridge (the 'Great Bridge') over the lake stretched the financial resources of Charles Marsham, 3rd Baron Romney.[3] Eventually the family gathered enough funds to expand the property and the park reached the size it is today, approximately 180 hectares. The Great Bridge was demolished and the lake itself expanded to around 30 acres (120,000 m2).

At the peak of its opulence in 1888 an article in the Gardener's Chronicle described extensive gardens, exotic plants and a walled kitchen garden including orangeries, vineries and peach houses, staffed by 25 gardeners.

In 1895 the estate was sold to Marcus Samuel, 1st Viscount Bearsted. The estate had included the Mote Cricket Club since 1857 however the Viscount Bearsted expanded the facility and built a pavilion between 1908 and 1910 (see below).

In 1929 Walter Samuel (the 2nd Viscount Bearsted) sold the majority of the estate to Maidstone Borough Council (then the Maidstone Corporation) for £50,000[12] and converted the house to an orphanage.[11] The family still retains an interest in the park today. 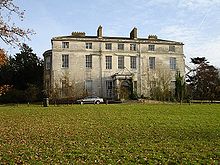 Between 1932 and 1941, Mote House (known then as "The Mote") was home to the Caldecott Community (now the Caldecott Foundation), a nursery organisation that had relocated to Maidstone from its original home in London following the First World War.

In 1941, war again forced the Community to move on (to Hyde House in Dorset) as Mote House was commandeered by the British Armed Forces (who continued to use the kitchen garden) as a headquarters and training facility during the Second World War. It was subsequently used as offices for the Ministry of Agriculture, Fisheries and Food before becoming a care home for the disabled. After lying empty for a number of years it is in the process of being redeveloped (along with its outbuildings) as retirement apartments and cottages.[11]

The park itself was remodelled following its purchase in the 1930s and now contains a number of recreation facilities (see below). It was also used as a venue for the annual Kent County Show between 1946 and 1963. Being central to the town, much of the population was able to walk to and from the Show which was and is held during the middle of July each year[13]

The park is registered at Grade II on the English Heritage Register of Historic Parks and Gardens. Mote House itself is a Grade II* listed building incorporating historic outbuildings including the Grade II listed stables.[14][15]

In 2011, it was announced that the parkland would undergo a major conservation and improvement project. Lost historic views are to be recreated as part of a £2.5m scheme. In February 2011, scrubland was due to be cleared and 140 new parkland trees planted including alder, birch, hornbeam, sweet chestnut, beech, oak, redwood and lime. Historic views like that between the Volunteers Pavilion and Mote will be reinstated by the removing poorer quality trees. Kent Wildlife Trust is collaborating on the project to ensure the ecology of the park is protected.[17][18]

Mote Park Cricket Ground is owned by The Mote Cricket Club and is also used by Maidstone RFC.[19][20] Up until 2005, it was also occasionally used by Kent County Cricket Club as one of their outgrounds. After 140 consecutive years of play, Mote Park was taken off the list of county grounds used by Kent when an over-watered 'green' wicket in a County Championship match against Gloucestershire led to a low scoring game that ended in under 2 days, incurring a subsequent 8 point point deduction for Kent.[21] The facilities had only months before been approved for redevelopment as part of a larger scheme to increase the profile of cricket in the county town.[22]

Since that time, The Mote Cricket Club have relaid a number of wickets at a cost of £14,000 with the help of grants and technical assistance from the county cricket club and Maidstone Borough Council, and it is hoped this will allow the return of county cricket in the near future.[23]

During its tenure as a county venue the ground saw a number of notable performances including Kent County Cricket Club's highest partnership for any wicket in first-class cricket during the 1995 season with Aravinda de Silva and Graham Cowdrey scoring 368[24] and in 1995 Mark Ealham making the fastest century in the history of the 40-over game. In 44 balls, Ealham scored a hundred, with 9 sixes and 9 fours.[24]