There are no particular or preferred elements within maiesiophilia that are common to all maiesiophiliacs. Some may pursue fantasies that are concerned with the circumstances in which a subject may give birth, or to the conditions to which the pregnant subject may find themselves acting upon, such as approaches to mobility, sleeping, and dressing. Particular areas and processes of the body that change during pregnancy may also become the focus of psychological investment, but nudity or sexual activity is not always essential, and in some cases actual pregnancy is not necessary to invoke arousal. In these cases, the appearance of an enlarged abdomen caused by obesity or overeating may be sufficient, or simply the suggestion of a protruding navel. 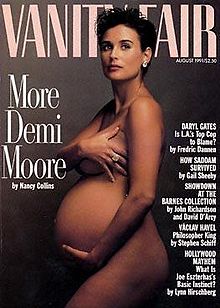 The glamorization of pregnancy as represented in 1991 on the More Demi Moore cover of Vanity Fair.

The naked appearance of actress Demi Moore in the advanced stage of pregnancy on the cover of Vanity Fair magazine in 1991 marked the beginning of a period which has since seen pregnancy presented by celebrities as a glamorous state of living, while also creating a market for photographers to produce images of pregnant mothers, and for fashion stylists to introduce "pregnancy styling" to their business.[4]

In Two and a Half Men season 4, Alan Harper displays his pregnancy fetish to his brother's maid's pregnant daughter, Naomi.