The Roman Catholic Diocese of Oakland (Latin: Dioecesis Quercopolitana) is an ecclesiastical territory or diocese of the Roman Catholic Church in Northern California. The diocese comprises Alameda and Contra Costa Counties in the San Francisco Bay Area. The Cathedral of Christ the Light serves as the bishop's seat, replacing the Cathedral of Saint Francis de Sales which was demolished after the Loma Prieta earthquake of 1989.

Once a part of the Archdiocese of San Francisco, the Diocese of Oakland remains a suffragan of the ecclesiastical province of San Francisco. Its fellow suffragans include the dioceses of Honolulu, Las Vegas, Reno, Sacramento, Salt Lake City, San Jose, Santa Rosa and Stockton.

The Diocese suffered from Catholic sex abuse cases brought forward by parishioners against its priests. From 1994 through 2009, the Diocese paid $60.5 million to its victims of sexual abuse, the largest payments being made in 2004 and 2005.

The patrons of the Diocese of Oakland are the Blessed Virgin Mary and Saint Francis de Sales. 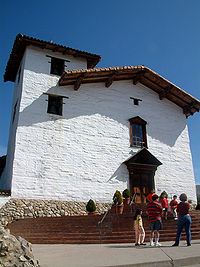 Mission San José is the seat of the first parish.

The first known Mass celebrated in the area that is to become the Diocese of Oakland was on March 27, 1772 by Father Juan Crespi on the shores of Lake Merritt. Twenty five years later, Mission San José was established in what is now Fremont, becoming the first parish in the area. Within time, Mission San José became the most prosperous of the California Missions and after secularization by the Mexican government the Mission remained an integral part of area with many of the early pioneer families sharing close ties with the Mission.

In the 1820s the Peralta family, landowners of much of what would become Alameda County, built a chapel on the grounds of Rancho San Antonio in present-day Oakland. The chapel was served by priests from the Mission and was called Saint Anthony's chapel.

The area came under episcopal control in 1840 with the establishment of the Diocese of the Two Californians. After the Mexican-American War in 1850, the diocese was split in two with the Diocese of Monterey in California administering the areas under American control. In 1853 Joseph Sadoc Alemany, the Bishop of Monterey, moved his seat to San Francisco and became the first Archbishop of San Francisco. At the time Mission San José was the only parish in the East Bay.

By the turn of the twentieth century many parishes were formed in Berkeley, Fremont, Livermore, Hayward, Oakland and San Leandro to reflect the growing populations in the East Bay. After World War II rapid growth in the San Francisco region led Pope John XXIII to establish the Diocese of Oakland in 1962 from the eastern portion of the San Francisco Archdiocese. Saint Frances de Sales was established as the diocesan mother church and Floyd Begin of Cleveland, Ohio was installed as Oakland's first bishop.

In the following decades the Cathedral of Saint Francis de Sales developed a national reputation for a lively liturgies and social ministries. The cathedral parish was also known for its excellence in music, developing what was called the "Oakland Cathedral Sound." Unfortunately, the cathedral church suffered damage in the 1989 Loma Prieta earthquake. The diocese deemed the repairs too costly (estimates were at $8 million for both the Cathedral and Sacred Heart Church) and instead opted to demolish the churches. It is now known as the Saint Mary-Saint Francis de Sales Parish.

In May 2005, ground was broken for the new $131 million Cathedral of Christ the Light, located on the shores of Lake Merritt in Oakland. The new Cathedral opened in 2008 with a new parish formed out of the current cathedral parish of Saint Mary-Saint Francis de Sales.

At least 64 Roman Catholic clergy members accused of molesting children have served in 61 of the 86 parishes in the Oakland Diocese, and in all seven of the Diocese's male-run high schools.[1] The Diocese has only acknowledged 12 of the molesters, according to a 2008 MediaNews analysis of court and church records.[1]

Nine diocesan clergy have been accused of molesting four or more children each, according to Dan McNevin of Survivors Network of those Abused by Priests (SNAP), and court records. Monsignor Vincent Breen was accused of abusing at least fifteen girls,[1] and Monsignor George Francis nine girls.[1] Reverend James Clark was accused of abusing four children, Reverend Arthur Ribeiro four, Reverend Robert Freitas five, Reverend Gary Tollner six, Reverend Robert Ponciroli eight, Reverend Donald Broderson eleven, and Reverend Stephen Kiesle fifteen.[1] One of the victims, Linda Chapin, was awarded $3 million in a 2004 settlement reached with the Diocese, related to her accusation that George Francis raped her "ritualistically and sadistically" several times beginning when she was six years old.[2] Francis died in 1998. Upon winning her settlement, Chapin called upon the Diocese to "name all the priests that there are credible allegations against."[2]

In 2005, Tim Stier, priest at the Corpus Christi Catholic Church in Fremont, California, stepped down from his 25-year service with the Oakland Diocese in protest of its failure to address sexuality problems in priests. Stier described the Diocese as hiding or ignoring the child sex abuse cases, and not holding its leaders accountable. He said, "It's not as if I'm a perfect person and I don't have weaknesses and sin. But there is a level of dishonesty and arrogance in this that just tells me we need systemic, radical change."[3] Stier has since endorsed such innovations as female priests, married priests, openly gay priests and married gay priests.[4]

In 2010, Stephen Kiesle was accused of abusing an 11-year-old girl, Teresa Rosson, from 1972, the year he was ordained, until 2001, two decades after he had been removed from the priesthood.[5] Kiesle married Rosson's mother in 1982.[5] In 1978, Kiesle had pleaded no contest to a misdemeanor charge of lewd conduct for tying up and molesting two boys in a church rectory[6] and was removed from his duties as a priest.[5] From 1985 to 1988, Kiesle volunteered as a youth minister in a parish in Pinole, but was removed after a worker in the Diocese's Office of Youth Ministry complained.[5] Kiesle was formally defrocked in 1987.[7] Eight of Kiesle's victims settled with the Diocese in 2005 for between $1 million and $1.5 million each,[7] part of a total of $56 million in settlements paid out by the Diocese that year to those who had been abused, and more than a quarter of a million in therapy for victims.[8] Diocese-owned insurance policies covered some 57% of these payments.[8] Kiesle was sentenced to six years in prison; some of the charges were dropped because they were beyond the legal statute of limitations. He was returned to prison for four months for possessing pornography in violation of his parole.[9]

In October 2008, Bishop Allen Henry Vigneron opened a Healing Garden at the Cathedral of Christ the Light, dedicated to victims of clergy sexual abuse.[8] From 1994 through 2009, the Diocese paid $60.5 million to its victims of sexual abuse.[8]

Today, the Diocese of Oakland serves an estimated 560,000 Catholics in the East Bay region. As the Bay Area is known for a diverse population the diocese celebrates mass in fifteen different languages including Spanish, American Sign Language, Vietnamese, Filipino and Latin (Mass of Paul VI and Tridentine Mass).

In addition to the elementary and high schools, seven Universities and Seminaries are located within Diocese of Oakland, these include: