Odell is a village and civil parish in the north of the county of Bedfordshire in England that lies to the north-west of the county town of Bedford, near the villages of Harrold, Felmersham, Sharnbrook, and Carlton.

Evidence of occupation includes the remains of a farm dating from just before the Roman invasion. It comprised two round timber buildings inside a fenced enclosure, and two cremation pits. After the conquest its survival and prosperity may have been linked to there being a Roman presence at Irchester.

The evidence is that the farm was abandoned in the 4th C. and remained unoccupied until the 6/7th C. After this it no doubt experienced a chequered history owing to attacks by Danish Vikings.

In the early 11th C. the area where the present village lies was part of five or more “hides” that were under Levenot, a thane of King Edward the Confessor, who owned much land.

At that time the village was already known by the name of Wadelle, or Wadehelle. This name means “the hill where woad grows”. Woad (Isatis tinctoria) was important as a source of a blue dye. (Julius Caesar had reported that he had found the Ancient Britons stained themselves with it.)

After the battle of Hastings in 1066, William the Conqueror and his Normans progressively took control of the whole of England. In many cases regions were given to fellow soldiers to manage. The lands owned by Levenot, along with the title of Baron, were passed to a Walter Flandrensis, the Count of Flanders, who is thought to have fought alongside William.

Walter is mentioned as early as 1068, and sometimes as Walter de Wahul (Wahul being a variant of Wadehelle). His arrival marked the start of a period of centuries during which a family bearing an Odell-type name continued to hold most of these lands.

Odell was recorded in the Domesday book of 1086 as a parish of the Hundred of Willey.[1]

Amongst the de Wahul dynasty were a number of interesting characters. The wild Simon de Wahul was described by the Archbishop of Canterbury as an “invader” of Ramsey Abbey. It is also known that Simon sided with Prince Henry in 1172 when Henry rebelled against his father. On the other hand, Simon’s own son, another Simon, was very devout. He ended up dying in 1191 on a crusade.

In 1542, in the absence of a male heir, the estate came to 17-day old Agnes Woodhall (like Wodelle this is another variant of the name). She married twice and her son by Richard Chetwood, also called Richard, became the heir to the estate on her death in 1575.

About this time the village often becomes referred to as Odell.

In 1613 Richard made efforts to be recognised as Baron of Odell (a claim his 18th C. great-great-grandson and 19th. C. descendant also later pursued) but without success. In 1633, Richard sold the estate to William Alston and, after five hundred years, Odell village was no longer under the influence of a descendant of the family bearing the same name. 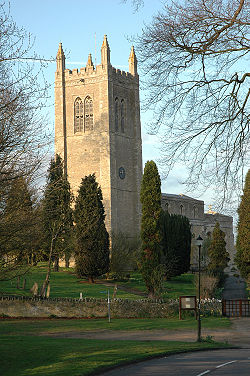 There is evidence that there was a church building in Odell village from as early as 1220, when Robert of Dunton is recorded as minister. A coffin lid also survives from this century. The present All Saints, however, dates from the 15th century. Built of limestone from Northamptonshire, it is a little atypical of Bedfordshire churches. In the late 17th century the building was greatly improved and in 1820 a clock was put in the tower. Further improvements were made in 1868, and in 1958 a sixth bell was added to the ring.

One of the more famous ministers at All Saints was Peter Bulkeley. Born in Odell in 1582, he became its rector in 1624, but since he did not “conform” to the requirements of the establishment, was suspended. In May 1635, like many other Nonconformists of the time, he emigrated to New England on the Susan and Ellen. On arrival he moved on to found the city of Concord, Massachusetts, becoming its first minister.

Between 1975 and 1981, All Saints church and Odell Castle played host to the Greenbelt Festival, attended by up to 15000 people.

A park bench on the village green, outside the pub and against the wall of the castle, was given to the village by the organisers in 1979.

Odell was one of the first villages in England to have its own website with its parish magazine uploaded every month. This continues today on www.odellbeds.net

Over recent years All Saints has become a place visited by those people round the world who seek to trace their ancestry to Odell, and to spend some time in the church or churchyard. Many of these visits are recorded in the church’s visitors' book.

While there is still a hill at Odell (with an attractive wood on it), there is little woad to be found; the plant is not as common in England as it once was. Commercially produced indigo has replaced woad as a dye (although seeds of woad can still be obtained).

During the 1970s, several gravel pits between Odell and nearby Harrold were flooded with water from the nearby Great Ouse, and the area turned into Harrold-Odell Country Park, popular with dog-walkers and bird spotters. A wide variety of native waterfowl and other birds are seen on or near the lakes, including Great Crested Grebes, moorhens, herons, swans, cormorants and a wide variety of ducks, as well as aquatic insects such as damselflies and dragonflies.

Most people pronounce the village's name as "oh-DEL", like the surname. Some commentators, however, consider it should be pronounced "OH-dl", rhyming with Yodel.