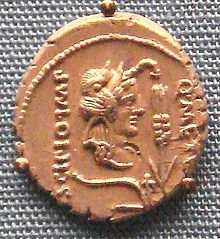 Denarius of Metellus Scipio with elephant-skin headgear to represent African imperium (47-46 BC).

Quintus Caecilius Metellus Pius Scipio Nasica (ca. 100/98 BC – 46 BC), in modern scholarship often as Metellus Scipio, was a Roman consul and military commander in the Late Republic. During the civil war between Julius Caesar and the senatorial faction led by Pompeius Magnus ("Pompey the Great"), he remained a staunch optimate. He led troops against Caesar's forces, mainly in the battles of Pharsalus and Thapsus, where he was defeated. He later committed suicide. Ronald Syme called him "the last Scipio of any consequence in Roman history."[1]

Metellus Scipio was born Publius Cornelius Scipio Nasica. His grandfather was the P. Cornelius Scipio Nasica Serapio who was consul in 111 BC; his father married Licinia Crassa, daughter of the L. Licinius Crassus who was consul in 95 BC. The father died not long after his praetorship (ca. 93 BC),[2] and was survived by two sons and two daughters. The brother was adopted by their grandfather Crassus, but left little mark on history.[3]

Publius Scipio, as he was referred to in contemporary sources early in his life, was adopted in adulthood through the testament of Quintus Caecilius Metellus Pius, consul in 80 BC and pontifex maximus. He retained his patrician status: "Scipio's ancestry," notes Syme, "was unmatched for splendour."[4] As Jerzy Linderski has shown at length,[5] this legal process constitutes adoption only in a loose sense; Scipio becomes a Caecilius Metellus in name[6] while inheriting the estate of Metellus Pius, but was never his "son" while the pontifex maximus was alive. He was called "Metellus Scipio" but also sometimes just "Scipio" even after his adoption. The official form of his name as evidenced in a degree of the senate was "Q. Caecilius Q. f. Fab. Metellus Scipio."[7]

Scipio married Aemilia Lepida, daughter of Mamercus Aemilius Lepidus Livianus (consul 77 BC), but was not without rival in the match. The virginal Cato had also wanted to marry Aemilia and lost out in the seduction:

The couple had one son, a Metellus Scipio who seems to have died when he was only 18.[9] Another son may have been born around 70, or a son may have been adopted. The couple's much more famous daughter was born around that time as well.[10] Scipio first married off the celebrated Cornelia Metella to Publius Crassus, the son of Marcus Licinius Crassus. After Publius's premature death at Carrhae, Scipio decided to succeed Caesar as the father-in-law of Pompeius, who was at least thirty years older than Cornelia. The marriage is one of the acts by which Pompeius severed his alliance to Caesar and declared himself the champion of the optimates. He and Scipio were consuls together in 52.

Cicero names "P. Scipio" among the young nobiles on his defense team when Roscius of Ameria was prosecuted in 80 BC. He is placed in the company of M. Messalla and Metellus Celer, both future consuls.[11]

Metellus Scipio has been listed as tribune of the plebs in 59,[12] but his patrician status argues against his holding the office.[13] It is possible that Scipio's 'adoption' into a plebeian gens may have qualified him for a tribunate on a technicality.[citation needed] He was possibly curule aedile in 57 BC, when he presented funeral games in honor of his adopted father's death six years earlier. He was praetor, most likely in 55 BC, during the second joint consulship of Pompeius and Marcus Crassus.

In 53 BC, he was interrex with M. Valerius Messalla.[14] He became consul with Pompeius in 52 BC, the year he arranged the marriage of his newly widowed daughter to him.

Indisputably aristocratic and conservative, Metellus Scipio had been at least symbolically a counterweight to the power of the so-called triumvirate before the death of Crassus in 53. "Opportune deaths," notes Syme, "had enhanced his value, none remaining now of the Metellan consuls."[15]

He is known to have been a member of the College of Pontiffs by 57 BC, and was probably nominated upon the death of his adoptive father in 63 and subsequently elected.[16]

Denarius issued by Metellus Scipio as Imperator in North Africa, 47–46 BC, depicting Jupiter and on the reverse an elephant

In January 49 BC, Metellus Scipio persuaded the senate to issue the ultimatum to Caesar that made war inevitable.[17] That same year, he became proconsul of the province of Syria.[18] In Syria and in the province of Asia, where he took up winter quarters, he used often oppressive means to gather ships, troops, and money:[19]

Scipio put to death Alexander of Judaea,[21] and was acclaimed Imperator for "alleged" victories in the Amanus mountains[22] — as noted disparagingly by Caesar.[23]

In 48 BC, he brought his forces from Asia to Greece, where he maneuvered against Gn. Domitius Calvinus and L. Cassius until the arrival of Pompeius. At the Battle of Pharsalus, he commanded the center. After the optimates' defeat by Caesar, Metellus fled to Africa. With the support of his former rival-in-romance Cato, he wrested the chief command of Pompeius's forces from the loyal Attius Varus, probably in early 47. In 46 BC, he held command at the Battle of Thapsus "without skill or success,"[15] and was defeated along with Cato.[24] After the defeat he tried to escape to the Iberian Peninsula to continue the fight, but was cornered by the fleet of Publius Sittius. He committed suicide by stabbing himself so he would not fall at the hands of his enemies.