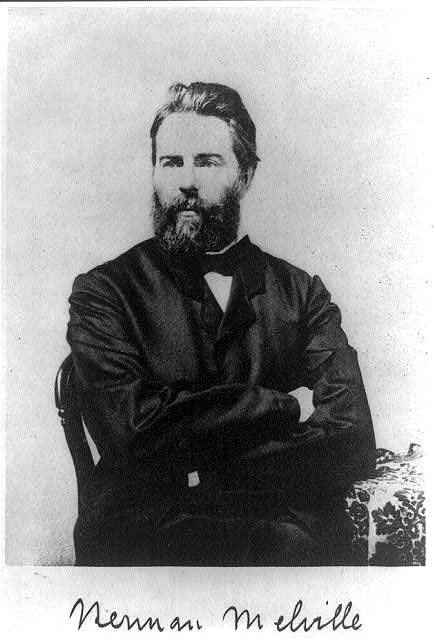 Herman Melville (August 1, 1819 &ndash; September 28, 1891) was an American novelist, writer, and poet. His first two books gained much attention, though they were not bestsellers, and his popularity declined precipitously after only a few years. By the time of his death he had been almost completely forgotten, but his longest novel, "" &mdash; largely considered a failure during his lifetime, and most responsible for Melville's fall from favor with the reading public &mdash; was recognized in the 20th century as one of the chief literary masterpieces of both American and world literature.

Herman Melville was born in New York City on August 1, 1819, [Sullivan, Wilson. "New England Men of Letters". New York: The Macmillan Company, 1972: 116. ISBN 0027886808] as the third child of Allan and Maria Gansevoort Melvill. (After Allan died, Maria added an "e" to the surname.) Part of a well-established - if colorful - Boston family, Melville's father spent a good deal of time abroad doing business deals as a commission merchant and an importer of French dry goods. His paternal grandfather, Major Thomas Melvill, an honored survivor of the who refused to change the style of his clothing or manners to fit the times, was depicted in Oliver Wendell Holmes's poem "The Last Leaf". Herman visited him in Boston, and his father turned to him in his frequent times of financial need. The maternal side of Melville's family was Hudson Valley Dutch. His maternal grandfather was General , a hero of the battle of Saratoga; in his gold-laced uniform, the general sat for a portrait painted by . The portrait appeared in Melville's later novel, "," for Melville wrote out of his familial as well as his nautical background. Like the titular character in "Pierre," Melville found satisfaction in his "double revolutionary descent." [citebook|author=Parker, Hershel|pages=p12|title=Herman Melville: A Biography|publisher=JHU Press|url=http://books.google.co.uk/books?id=OrTOQR4QyKIC&pg=PA12&lpg=PA12&dq=%22double+revolutionary+descent%22+melville+-wikipedia+-%22like+the+titular%22&source=web&ots=__kHlRe1nq&sig=9OSQORC7xXsAZPPAaRWvy1aIMrk&hl=en&sa=X&oi=book_result&resnum=1&ct=result#PPA11,M1|accessdate=2008-07-11]

Herman's younger brother, , was a governor of .

Allan Melvill sent his sons to the New York Male School (Columbia Preparatory School). Overextended financially and emotionally unstable, Allan tried to recover from his setbacks by moving his family to Albany in 1830 and going into the fur business. The new venture, however, was unsuccessful: the had ruined businesses that tried to sell overseas and he was forced to declare . He died shortly after, leaving his family penniless, when Herman was 12. [Sullivan, Wilson. "New England Men of Letters". New York: The Macmillan Company, 1972: 117. ISBN 0027886808] Although Maria had well-off kin, they were concerned with protecting their own inheritances and taking advantage of investment opportunities rather than settling their mother's estate so Maria's family would be more secure.

Herman Melville's roving disposition and a desire to support himself independently of family assistance led him to seek work as a surveyor on the Erie Canal. This effort failed, and his brother helped him get a job as a on a New York ship bound for . He made the voyage, and returned on the same ship. "" (1849) is partly based on his experiences of this journey.

The three years after Albany Academy (1837 to 1840) were mostly occupied with school-teaching, except for the voyage to Liverpool in 1839. Near the end of 1840 he once again decided to sign ship's articles. On January 3, 1841, he sailed from on the whaler "Acushnet",

Melville did not seem to be concerned about repercussions from his desertion of the "Acushnet". He boarded another whaler bound for and left that ship in . After working as a clerk for four months he joined the crew of the "USS United States", which reached Boston in October 1844. These experiences were described in "Typee", "", and "", which were published as novels mainly because few believed their veracity.

Melville completed "Typee" in the summer of 1845 though he had difficulty getting it published.

Melville married Elizabeth Shaw (daughter of noted Massachusetts jurist ) on August 4, 1847; the couple honeymooned in Canada. [Delbanco, Andrew. "Melville, His World and Work". New York: Alfred A. Knopf, 2005: 91–92. ISBN 0-375-40314-0] They had four children, two sons and two daughters. In 1850 they purchased Arrowhead, a farm house in that is today a museum. Here Melville remained for thirteen years, occupied with his writing and managing his farm. There he befriended the author , who lived in nearby Lenox. Melville, something of an intellectual loner for most of his life, was tremendously inspired and encouraged by his new relationship with Hawthorne [In the Essay Melville published on Hawthorne's 'Mosses' in the Literary Review of August 1850 he wrote: "To what infinite height of loving wonder and admiration I may yet be borne, when by repeatedly banquetting on these Mosses, I shall have thoroughly incorporated their whole stuff into my being,--that, I can not tell. But already I feel that this Hawthorne has dropped germinous seeds into my soul. He expands and deepens down, the more I contemplate him; and further, and further, shoots his strong New-England roots into the hot soil of my Southern soul.] during the very period that he was writing one of the greatest works in the English language, "Moby-Dick" (dedicating it to Hawthorne

For financial reasons, Melville was persuaded while in Pittsfield to enter what was for others the lucrative field of lecturing. From 1857 to 1860, he spoke at lyceums, chiefly on the South Seas. Turning to poetry, he gathered a collection of verse that failed to interest a publisher. In 1863, he and his wife resettled, with their four children, in New York City. After the end of the , he published "Battle Pieces and Aspects of the War" (1866), a collection of over seventy poems that was generally panned by critics. His professional writing career was at an end and his marriage was unhappy when in 1867 his oldest son, Malcolm, shot himself, perhaps accidentally. Pulling his life together, Melville used his influence to obtain a position as customs inspector for the City of New York (a humble but adequately-paying appointment), and held the post for 19 years. (The customs house was ironically on Gansevoort St., which was named after his mother's prosperous family.) In 1876 his uncle Peter Gansevoort, by a bequest, paid for the publication of the massive epic poem, "". Two volumes of poetry followed: "" (1888) and "Timoleon" (1891).

Melville died at his home in New York City early on the morning of September 28, 1891, age 72. The doctor listed "cardiac dilation" on the death certificate.

From about age thirty-three, Melville ceased to be popular with a broad audience because of his increasingly philosophical, political and experimental tendencies. His novella Billy Budd, Sailor, unpublished at the time of his death, was published in 1924. Later it was turned into an by , a play, and a film by .

In "Herman Melville's Religious Journey", detailed his discovery of letters indicating that Melville had been a member of the Church of All Souls in New York City. Until this revelation, little had been known of his religious affiliation. Parker in the second volume of his biography makes it clear that Melville became a nominal member only to placate his wife. He despised Unitarianism and its associated "ism", Utilitarianism. (The great English Unitarians were Utilitarians.) See the 2006 Norton Critical Edition of "The Confidence-Man" for more detail on Melville and religion than in Parker's 2002 volume.

Most of Melville's novels were published first in the United Kingdom and then in the U.S. Sometimes the editions contain substantial differences; at other times different printings were either bowdlerized or restored to their pre-bowdlerized state. (For specifics on different publication dates, editions, printings, etc., please see entries for individual novels.)

"Moby-Dick" has become Melville's most famous work and is often considered one of the greatest literary works of all time. It was dedicated to Melville's friend .

Melville is less well known as a poet and did not publish poetry until late in life. After the Civil War, he published "", which did not sell well; of the Harper & Bros. printing of 1200 copies, only 525 had been sold ten years later. ["Collected Poems of Herman Melville", Ed. Howard P. Vincent. Chicago: Packard & Company and (1947), 446.] But again tending to outrun the tastes of his readers, Melville's epic length verse-narrative "", about a student's pilgrimage to the , was also quite obscure, even in his own time. This may be the longest single poem in American literature. The poem, published in 1876, had an initial printing of only 350 copies. The critic found a copy of the poem in the in 1925 "with its pages uncut".Fact|date=May 2007 In other words, it had sat there unread for 50 years.

His poetry is not as highly critically esteemed as his fiction, although some critics place him as the first poet in the United States; others would assert that his work more strongly suggest what today would be a postmodern view.Fact|date=May 2007 "" has won the admiration of no less a critic than , who read it in preparation for the 1976 Pittsfield Centennial Celebration.

After the success of travelogues based on voyages to the South Seas and stories based on misadventures in the merchant marine and navy, Melville's popularity declined dramatically. By 1876, all of his books were out of print. [Delbanco, Andrew. "Melville, His World and Work". New York: Alfred A. Knopf, 2005: 294. ISBN 0-375-40314-0] In the later years of his life and during the years after his death he was recognized, if at all, as only a minor figure in American literature.

A confluence of publishing events in the 1920s brought about a reassessment now commonly called the Melville Revival. The two books generally considered most important to the RevivalFact|date=May 2007 were both brought forth by Raymond Weaver: his 1921 biography "Herman Melville: Man, Mariner and Mystic" and his 1924 version of Melville's last great but never quite finished or properly organized work, "", which Melville's granddaughter gave to Weaver when he visited her for research on the biography. The other works that helped fan the Revival flames were 's "The American Novel" (1921), 's "" (1923), and 's biography, "Herman Melville: A Study of His Life and Work" (1929).

Themes of Gender and Sexuality

More recently, there has been an emerging interest in the role of gender and sexuality in some of Melville's writings. [Serlin, David Harley. "The Dialogue of Gender in Melville's "The Paradise of Bachelors and the Tartarus of Maids" Modern Language Studies 25.2 (1995): 80-87] [James Creech, "Closet writing: The case of Melville's Pierre", 1993] [Rosenberg, Warren. "'Deeper than Sappho': Melville, Poetry, and the Erotic." Modern Language Studies 14.1 (1984): 70-78.] Some critics, particularly those interested in gender and sexuality, have examined possible homosocial or homoerotic overtones in some of Melville's works. [see Delblanco, Andrew. American Literary History 1992.] A common example of the latter from "" is the interpretation of from the "marriage bed" episode involving Ishmael and Queequeg, as well as the "Squeeze of the Hand" chapter describing the camaraderie of sailors extracting spermaceti from a dead whale. [E. Haviland Miller, "Melville", New York 1975.] Some critics have speculated that perceived themes of sexuality in his writings may be reflective of his own personal beliefs, despite the fact that there is no hard evidence to support this claim. [see Delblanco, Andrew. American Literary History 1992.]