History of rail transport in Germany

History of rail transport in Germany

German Railway history began with the opening of the steam-hauled Bavarian Ludwig Railway between Nuremberg and Fürth on 7 December 1835. This had been preceded by the opening of the horse-hauled Prince William Railway on 20 September 1831. The first long distance railway was the Leipzig-Dresden railway, completed on 7 April 1839. 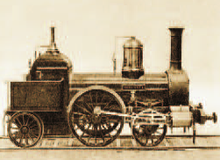 Political disunity of three dozen states and a pervasive conservatism made it difficult to build railways in the 1830s. However, by the 1840s, trunk lines did link the major cities; each German state was responsible for the lines within its own borders.

During the 1820s, the nobility favored costly and economically inefficient (but prestigious) canal projects over railroads. In the 1830s, the growing liberal middle classes supported railways as a progressive innovation with benefits for the German people in general as well as for the shareholders in the joint stock companies that built and operated the railroads. Though private concerns such as the Nuremberg-Fürth railroad were superseded by government railroad companies in the 1840s, the government companies copied many of the private companies' methods and organizational structures[1]. Economist Friedrich List, speaking for the liberals, summed up the advantages to be derived from the development of the railway system in 1841:

First, as a means of national defense, it facilitates the concentration, distribution and direction of the army. 2. It is a means to the improvement of the culture of the nation…. It brings talent, knowledge and skill of every kind readily to market. 3. It secures the community against dearth and famine, and against excessive fluctuation in the prices of the necessaries of life. 4. It promotes the spirit of the nation, as it has a tendency to destroy the Philistine spirit arising from isolation and provincial prejudice and vanity. It binds nations by ligaments, and promotes an interchange of food and of commodities, thus making it feel to be a unit. The iron rails become a nerve system, which, on the one hand, strengthens public opinion, and, on the other hand, strengthens the power of the state for police and governmental purposes.[2]

Lacking a technological base at first, the Germans imported their engineering and hardware from Britain, but quickly learned the skills needed to operate and expand the railways. In many cities, the new railway shops were the centers of technological awareness and training, so that by 1850, Germany was self sufficient in meeting the demands of railroad construction, and the railways were a major impetus for the growth of the new steel industry. Observers found, that already as early as 1890, ( 14 years after the invention of the Otto cycle engine by Nikolaus August Otto and his partner Eugen Langen ) their engineering became superior to Britain’s.

The Prince William Railway was a horse-hauled narrow gauge (82 cm) railway that ran for a Prussian mile (7,532 metres) along the Deilbach valley from Hinsbeck near Essen to Nierenhof, opened on 20 September 1831. It operated as a horse-drawn railway carrying coal until 1844, but from 1833 it also carried passengers. In 1847, it was converted to standard gauge and became a steam-hauled railway.

The Bavarian Ludwig Railway commenced operations on 7 December 1835 with the Adler (Eagle) locomotive running between Nuremberg and Fürth. The locomotive was built by Stephenson and Co. in Newcastle upon Tyne.

The third German railway was the Leipzig-Dresden railway, opened from Leipzig to Althen on 24 April 1837 and completed to Dresden on 7 April 1839. It was the first long-distance line Germany with a length of 120 km and it also contained the first railway tunnel in Germany.

The following years saw a rapid growth: By the year 1845, there were already more than 2,000 km of railroads in Germany, ten years later that number was above 8,000. Most German states had state-owned railway companies, but there were several large private companies as well. One of these private companies, the Rhenish Railway (Rheinische Eisenbahn), built the first ever international railway line. The line connected Cologne to Antwerp in Belgium and was opened in 1843.

Further information: List of the first German railways to 1870

German unification in 1871 stimulated consolidation, nationalization into state-owned companies, and further rapid growth[3]. Unlike the situation in France, the goal was support of industrialization, and so heavy lines crisscrossed the Ruhr and other industrial districts, and provided good connections to the major ports of Hamburg and Bremen. By 1880, Germany had 9,400 locomotives pulling 43,000 passengers and 30,000 tons of freight, and forged ahead of France[4]

Prussia nationalized its railways in an effort both to lower rates on freight service and to equalize those rates among shippers. Instead of lowering rates as far as possible, the government ran the railways as a profitmaking endeavor, and the railway profits became a major source of revenue for the state. The nationalization of the railways slowed the economic development of Prussia because the state favoured the relatively backward agricultural areas in its railway building. Moreover, the railway surpluses substituted for the development of an adequate tax system[5].

As the main line network consolidated, railways were driven into the hinterland, serving local needs and commuter traffic. This was the age of the branch line or Nebenbahn (plural: -en), also variously called the Sekundärbahn ("secondary line"), Vizinalbahn ("neighbourhood line") or Lokalbahn ("local line") depending on local laws and usage.

Several states operated their own railways, collectively called the Länderbahnen (state railways). Those created up to 1871 were the:

The Palatinate Railway (Pfalzbahn), formed in 1870, was a private railway company that was nationalised in 1909 and became part of the K.Bay.Sts.B..

In order to enable the free exchange of goods wagons between the different state railway administrations, the German State Railway Wagon Association (Deutscher Staatsbahnwagenverband or DSV) was formed in 1909. The standard wagons that resulted are often referred to as 'DSV wagons'.

At the end of the First World War, most of the state railways lost their 'royal' or 'grand duchy' titles as the nobility abdicated. Huge reparations of locomotives and rolling stock followed. Epoch I ended with the merger of the seven remaining state railways in the newly created Deutsche Reichsbahn in 1920.

In 1920 after World War I the Länderbahnen were united to form the Deutsche Reichsbahn. According to the "Dawes Plan", it was by law in 30. August 1924 transformed into Deutsche Reichsbahn-Gesellschaft (DRG, German State Railway Company), a private company, which was required to pay reparations of about 660 million Marks annually.

The more than 200 steam locomotive types of the different German Länderbahnen were grouped into Baureihen (BR) (roughly translates as classes) of engines with similar wheel notations, like the "BR 18" which covered all 4-6-2 Pacific express train engines.

New construction standards since 1925 resulted in Einheitsloks (DRG Standard design), using similar mechanical parts to lower costs, which allowed fast and reliable manufacturing, repair and operating. New DRG Standard design locomotives were mostly large passenger and freight locomotives, like the Class 01 or Class 41. In 1928 the Rheingold Express started riding between Hoek van Holland and Basel. On 11 May 1936 the streamlined steam locomotive 05 002 established the first railway speed world record above 200 km/h: 200.4 km/h, between Hamburg and Berlin. The record was finalised by Mallard in 1938 at 203 km/h.

The standardisation of goods wagons under the German State Railway Wagon Association, that had produced the Verbandsbauart ('Association design') wagons, continued as new designs using interchangeable components were introduced from about 1927. These were the Austauschbauart ('interchangeable design') wagons. The 1930s saw the introduction of welded construction and solid wheels replacing spoked wheels on new goods wagons. As the Second World War loomed, production was geared towards the war effort. The focus was on fewer types but greater numbers of so-called Kriegsbauart or wartime designs for the transportation of large quantities of tanks, vehicles, troops and supplies.

The grave lack of passenger coaches resulting from World War I reparations led to the design and production of all-steel, standard passenger coaches in the 1920s and early 1930s. These four-wheeled, branch line coaches, nicknamed Donnerbüchsen, lasted into the 1970s and can still be seen today on museum lines.

During the Second World War, austere versions of the standard locomotives were produced to speed up construction times and minimise the use of imported materials. These were the so-called war locomotives (Kriegslokomotiven and Übergangskriegslokomotiven). Millions of Jews were deported using Deutsche Reichsbahn to concentration camps and death camps, such as Auschwitz.

After World War II, Germany (and the DRG) was divided into 4 zones: US, British, French and Soviet. The first three eventually combined to form the Federal Republic of Germany (the West) and the Russian zone became the German Democratic Republic (the East). German territories beyond the Oder were ceded to Poland except for the northern part of East Prussia, which was ceded to the Soviet Union in 1945.

Unlike the DRG, which was a corporation, both the DB and the DR were federal state institutions, directly controlled by their respective transportation ministries. Railway service between East and West was restricted; there were around five well-controlled and secure checkpoints between West and East Germany, and about the same number between East Germany and West Berlin. Four transit routes existed between West Germany and West Berlin; citizens of West Berlin and West Germany were able to use these without too much harassment by the East German authorities.

The DB started in 1968 with changing the locomotive and passenger car serial numbers to the UIC norm. In 1970 the DR followed. The DB started experimenting with the Intercity trains in a new livery (bright orange).

In 1988 the prototype InterCityExperimental (ICE V) sets a new German railway speed record of 406.9 km/h (254.3 miles/h) on the new high speed line between Fulda and Würzburg. In 1991 the new high speed lines Hannover-Fulda-Würzburg (280 km/h) and Mannheim-Stuttgart (250 km/h) were opened for service including the new ICE 1 train sets.

In 1989, the Wall fell. Train frequency rapidly increased on the existing East/West corridors; closed links which had formerly crossed the border were re-opened. On 3 October 1990, Germany was reunified; however, this was not the case with the railways. Administrative and organisational problems led to the decision to completely re-organise and reconnect Germany's railways. The so-called Bahnreform (Railway Reform) came into effect on 1 January 1994, when the State railways Deutsche Bundesbahn and Deutsche Reichsbahn were formally reunited to form the current German Railway Corporation (Deutsche Bahn).