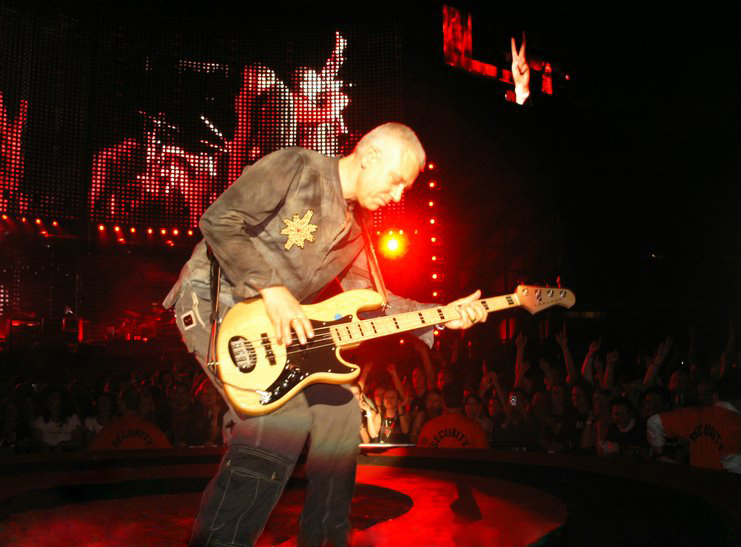 Adam Charles Clayton (born 13 March 1960 in , , UK), is the bassist of the rock band . [cite web |url=http://www.threechordsandthetruth.net/u2bios/u2adambio.htm|title=Adam Clayton biography |accessdate=2007-09-06 |author=Philip Taylor |last=Taylor |first=Philip] A British citizen, Clayton has resided in since the time his family moved to when he was five years old in 1965. Clayton is well-known for his bass playing on songs such as "New Year's Day" and "". [cite web |url=http://www.atu2.com/news/article.src?ID=1263&Key=&Year=2001&Cat=5 |title=Different Class, Part 2 |accessdate=2007-09-08 |author=Dorian Lynskey |last=Lynskey |first=Dorian|publisher=Q magazine] He has worked on several solo projects throughout his career, such as his work with fellow band member on the theme of 1996's "". Clayton, as a part of U2, has won 22 Grammy awards.

Clayton is the eldest child of Brian and Jo Clayton, born on 13 March 1960 in Chinnor, Oxfordshire, England. When Clayton was five years old, his family moved from Oxfordshire to Malahide, near Dublin, where Clayton's brother Sebastian was born. The Clayton family became friends with the Evans family, with their sons Dick and Dave (more commonly known as ), who were both in the original group, Feedback, that spawned U2.

Clayton attended boarding school firstly at Castle Park School in Dalkey, then at St. Columba's in . He later changed school to in Dublin, where he met fellow bandmates Paul "" Hewson and , and was reunited with his boyhood friend Dave "" Evans. Mullen had posted an advertisement on the school bulletin board for musicians to form a band with him; Clayton showed up at the first practice, which also included Dick Evans, Dave Evans's older brother, Ivan McCormick, and Peter Martin, who were two of Mullen's friends. McCormick and Martin left the band soon after its conception. While the band was a five-piece (consisting of Bono, The Edge, Mullen, Evans, and Clayton), it was known as Feedback. The name was subsequently changed to The Hype, but changed to "U2" soon after Evans left the band.

In 1981, around the time of U2's second, spiritually charged album, "October", a rift was created in the band between Clayton and McGuinness, and the three other band members. Bono, The Edge, and Mullen had joined a Christian group, and were questioning the compatibility of rock music with their spirituality. However, Clayton, with his more ambiguous religious views, was less concerned, and so was more of an outsider, until Bono's wedding to (Neé Stewart), in which Clayton was the best man.

In August 1989, Clayton made newspapers around the world when he was arrested in Dublin carrying a small amount of marijuana. However, he avoided conviction by making a large donation to charity, and has later been regretful, saying "It was my own fault. And I'm sure I was out of my head &mdash; emotionally apart from anything else. But it is serious because it is illegal." Clayton has also had alcohol problems, which came to a head on 26 November 1993 when he was so hung over that he was unable to play that night's show in . After that incident, however, he gave up alcohol.

In 1995, after the groundbreaking and "" album, Clayton headed to with bandmate Mullen to receive formal training in the bass; until then Clayton had been entirely self-taught. During that period, he worked on U2's experimental album, released under the "Passengers", entitled "". That album features one of the few instances where Clayton has appeared as a vocalist; he spoke the last verse of "", the album's second single. Prior to this Clayton had only provided live backing vocals to tracks such as "Out of Control", "", "Twilight" and "". Since 1998's tour Clayton has not sung live in any capacity for the band.

In 1996, whilst still in New York, Clayton collaborated with Mullen to re-record the "" theme.

Clayton remains the only bachelor member of U2. During the early 1990s, he was involved with and briefly engaged to British supermodel . He also had a long-standing relationship with Suzanne "Susie" Smith, a former assistant to Paul McGuinness; they were engaged in 2006, but the pair broke up in February 2007. [ cite web |url=http://www.u2france.com/spip.php?article10122 |title=U2’s Adam splits up with fiancee Susie (U2France) |accessdate=2007-09-08 |author=Barry Egan |last=Egan |first=Barry]

As a bass player, Adam Clayton is recognized for his unique playing style and rhythms that are apparent in many songs, most notably "New Year's Day", which evolved out of an attempt to play 's song "Fade to Grey", and "".

Clayton has sung on several occasions, for example, on the song "Endless Deep", the B-side to the single "" from 1983, he made an appearance singing. He also spoke the last verse of the aforementioned "". Clayton can be heard speaking on "Tomorrow ('96 Version)" (a rerecording of "Tomorrow" that he arranged) a song from U2's 1981 album "October".

Throughout his career, Clayton has used both Precision and Jazz basses. His first bass, however, was a dark brown copy. He uses Ashdown amplifiers and blue Herdim picks, as does bandmate . Clayton's Precision bass is modified with a Fender Jazz neck; in an interview with "Bass Player" magazine, he said that he prefers the Jazz bass neck because it is more "lady-like" and is a better fit in his left hand.