In economics, a cost curve is a graph of the costs of production as a function of total quantity produced. In a free market economy, productively efficient firms use these curves to find the optimal point of production (minimising cost), and profit maximizing firms can use them to decide output quantities to achieve those aims. There are various types of cost curves, all related to each other, including total and average cost curves, and marginal ("for each additional unit") cost curves, which are the equal to the differential of the total cost curves. Some are applicable to the short run, others to the long run. 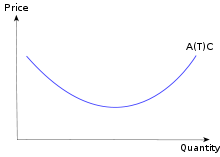 The average total cost curve is constructed to capture the relation between cost per unit of output and the level of output, ceteris paribus. A perfectly competitive and productively efficient firm organizes its factors of production in such a way that the average cost of production is at the lowest point. In the short run, when at least one factor of production is fixed, this occurs at the output level where it has enjoyed all possible average cost gains from increasing production. This is at the minimum point in the diagram on the right.

Short-run total cost is given by 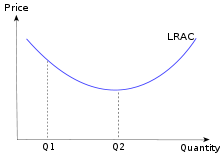 The long-run average cost curve depicts the cost per unit of output in the long run—that is, when all productive inputs' usage levels can be varied. All points on the line represent least-cost factor combinations; points above the line are attainable but unwise, while points below are unattainable given present factors of production. The behavioral assumption underlying the curve is that the producer will select the combination of inputs that will produce a given output at the lowest possible cost. Given that LRAC is an average quantity, one must not confuse it with the long-run marginal cost curve, which is the cost of one more unit.[3]:232 The LRAC curve is created as an envelope of an infinite number of short-run average total cost curves, each based on a particular fixed level of capital usage.[3]:235 The typical LRAC curve is U-shaped, reflecting increasing returns of scale where negatively-sloped, constant returns to scale where horizontal and decreasing returns (due to increases in factor prices) where positively sloped.[3]:234 Contrary to Viner[citation needed], the envelope is not created by the minimum point of each short-run average cost curve.[3]:235 This mistake is recognized as Viner's Error.[citation needed]

In some industries, the bottom of the LRAC curve is large in comparison to market size (that is to say, for all intents and purposes, it is always declining and economies of scale exist indefinitely). This means that the largest firm tends to have a cost advantage, and the industry tends naturally to become a monopoly, and hence is called a natural monopoly. Natural monopolies tend to exist in industries with high capital costs in relation to variable costs, such as water supply and electricity supply.[3]:312 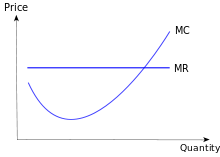 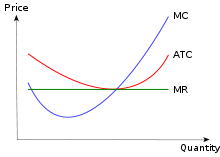 Basic: For each quantity of output there is one cost minimizing level of capital and a unique short run average cost curve associated with producing the given quantity.[9]

These statements assume that the firm is using the optimal level of capital for the quantity produced. If not, then the SRAC curve would lie "wholly above" the LRAC and would not be tangent at any point.

Both the SRAC and LRAC curves are typically expressed as U-shaped.[8]:211; 226 [13]:182;187-188 However, the shapes of the curves are not due to the same factors. For the short run curve the initial downward slope is largely due to declining average fixed costs.[2]:227 Increasing returns to the variable input at low levels of production also play a role,[16] while the upward slope is due to diminishing marginal returns to the variable input.[2]:227 With the long run curve the shape by definition reflects economies and diseconomies of scale.[13]:186 At low levels of production long run production functions generally exhibit increasing returns to scale, which, for firms that are perfect competitors in input markets, means that the long run average cost is falling;[2]:227 the upward slope of the long run average cost function at higher levels of output is due to decreasing returns to scale at those output levels.[2]:227