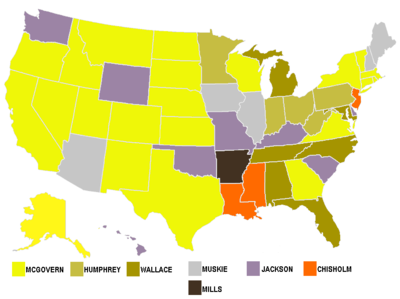 The establishment favorite for the Democratic nomination was Ed Muskie,[1] the moderate who acquitted himself well as the 1968 Democratic vice-presidential candidate. In August 1971 Harris polling amid a growing economic crisis, Muskie came out on top of incumbent Nixon if the election had been held that day.[1]

Shirley Chisholm announced she would run and became the first black person ever to run for president on a major party ticket and the first woman to run for the Democratic presidential nomination.[2]

But then prior to the New Hampshire primary, the "Canuck Letter" was published in the Manchester Union-Leader. The letter, later revealed to have been a forgery produced as part of the "dirty tricks" campaign by Richard Nixon's staff members,[citation needed] claimed that Muskie had made disparaging remarks about French-Canadians. Subsequently, the paper published an attack on the character of Muskie's wife Jane, reporting that she drank and used off-color language. Muskie made an emotional defense of his wife in a speech outside the newspaper's offices during a snowstorm. Though Muskie later stated that what had appeared to the press as tears were actually melted snowflakes, the press reported that Muskie broke down and cried.[3] Muskie did worse than expected in the primary, while McGovern came in a surprisingly close second. McGovern now had the momentum, which was well orchestrated by his campaign manager, Gary Hart.

Alabama governor George Wallace, with his "outsider" image, did well in the South (he won every single county in the Florida primary) and among alienated and dissatisfied voters. What might have become a forceful campaign was cut short when Wallace was shot while campaigning, and left paralyzed in an assassination attempt by Arthur Bremer. Wallace did win the Maryland primary, but his near assassination effectively ended his campaign.

In the end, McGovern succeeded in winning the nomination by winning primaries through grass-roots support in spite of establishment opposition. He had led a commission to redesign the Democratic nomination system after the messy and confused nomination struggle and convention of 1968. The fundamental principle of the McGovern-Fraser Commission—that the Democratic primaries should determine the winner of the Democratic nomination—lasted throughout every subsequent nomination contest. However, the new rules angered many prominent Democrats whose influence was marginalized, and those politicians refused to support McGovern's campaign (some even supporting Nixon instead), leaving the McGovern campaign at a significant disadvantage in funding compared to Nixon.

Chairman of the House Ways and Means Committee Wilbur Mills was drafted by friends and fellow Congressmen to make himself available as a candidate for the primaries. To position himself to appeal to senior citizens during the 1972 presidential campaign, Mills championed the automatic Cost Of Living Adjustment (COLA) to Social Security. He was not strong in the primaries and won 33 votes for president from the delegates at the 1972 Democratic National Convention which nominated Senator George McGovern.

Washington Senator Scoop Jackson was little known nationally when he first ran for President in 1972. McGovern accused Jackson of racism for his opposition to busing, despite Jackson's longstanding record on civil rights issues. Jackson had the support of Marxist theorist Max Shachtman, an associate of Leon Trotsky.[4] Jackson's high point in the campaign was a distant third in the early Florida primary, but he failed to stand out of the pack of better-known rivals, and only made real news later in the campaign as part of the "Anybody but McGOvern" coalition, that raised what would be known as the "Acid, Amnesty and Abortion" questions about McGovern. Jackson suspended active campaigning in May after a weak showing in the Ohio primary and after finishing well behind McGovern, Muskie, George Wallace,and Hubert Humphrey in early primaries. Jackson did re-emerge at the August Democratic convention after runner-up Humphrey dropped out of the race. Jackson's name was placed in nomination by Georgia Governor Jimmy Carter, and he finished second in the delegate roll call, well behind nominee McGovern.[5][6]

Gloria Steinem and Betty Friedan ran as Chisholm delegates in New York.[7] By the 1972 election, the women's movement was rapidly expanding its political power. Steinem, along with Congresswomen Chisholm and Bella Abzug, had founded the National Women's Political Caucus in July 1971.[8]

Nevertheless, Steinem was reluctant to re-join the McGovern campaign. Though she had brought in McGovern's single largest campaign contributor in 1968, she "still had been treated like a frivolous pariah by much of McGovern's campaign staff." And in April 1972, Steinem remarked that he "still doesn't understand the women's movement."[9]

While campaigning in Laurel, Maryland, on May 15, 1972, Wallace was shot five times by Arthur Bremer. Three others wounded in the shooting also survived. Bremer's diary, published after his arrest as a book titled An Assassin's Diary, showed that Bremer's assassination attempt was not motivated by politics, but by a desire for fame, and that President Nixon had been a possible target. The assassination attempt left Wallace paralyzed, as one of the bullets had lodged in his spinal column.

Following the shooting, Wallace won primaries in Maryland and Michigan. Wallace spoke at the Democratic National Convention from his wheelchair in Miami on July 11, 1972. The eventual Democratic nominee, Senator George McGovern of South Dakota would be defeated by President Nixon in a landslide, with Nixon carrying 49 of the 50 states, losing only in Massachusetts.

While Wallace was recovering in Holy Cross Hospital in Silver Spring, Maryland, he was out of the state for more than 20 days. The Alabama state constitution required the lieutenant governor, Jere Beasley, to serve as acting governor from June 5 until Wallace's return to Alabama on July 7; Wallace never returned to Maryland.

Bremer was sentenced to 53 years in prison for the shooting. He served 35 years of the sentence and was released on parole on November 9, 2007.