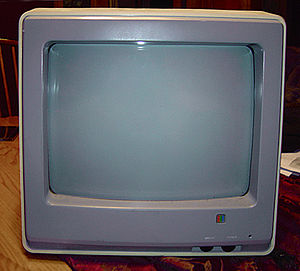 This is an early example of a composite monitor with color graphics marketed for home use.

A composite monitor is any analog video display that receives input in the form of an analog composite video signal through a single cable — in contrast to multiple-cable or multiple-wire video sources such as VGA cable. A monitor is different from a conventional TV set because it does not have an internal RF tuner or RF converter that can receive signals from an over-the-air broadcast TV station; however a user can install an external device that emulates a TV tuner (e.g. VCR, cable box, etc.). A video display that is a "monitor-only" is useful for security cameras, some computers, and many other devices. 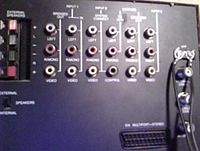 Composite and S-Video are used in PAL and NTSC regions.

Composite monitors can be very high quality, with professional broadcast reference displays costing $10k-$15k (USD) as of the year 2000.

Note that all composite monitors imply the use of a CRT for display, and for color signals anyway, the composite signal must be "decoded" into its three components of red, green and blue to be fed to each gun of the CRT. A critical factor in the quality of this display is the type of "encoding" that is used in the TV camera to combine the signal together and the type of "decoding" that is used in the TV set to separate the signals back to RGB for display.

Early innovations of this technology

During the same time period, home game consoles chose to stick with channel 3/4 outputs since many people had color televisions without composite video inputs. However, in 1985, the NES was released and was the first game console to feature direct composite outputs. Although the redesigned NES(NES 2) lacked these outputs, the Super NES and nearly all consoles made since have included the direct composite outputs. From the fifth generation systems(such as the Sony Playstation and the Nintendo 64) onward, many consoles used these outputs as the primary means of connecting to the television, requiring a separate adapter for use on televisions lacking composite inputs. As of today, some people still use stand-alone composite monitors with modern game consoles even with the advent of televisions with a tuner and composite inputs combined.

Presently, AV devices with advanced technology do not have Channel 3/4 outputs (e.g. DVD players, video game consoles, etc.). One major exception to this is a TiVo DVR. People often use RF modulators to overcome the problem of a TV set not having composite or S-Video inputs. Another method used by some game systems is a built-in RF converter, which eliminates the bulkiness of an RF modulator.

Sometimes, stand-alone composite monitors cannot be used with older-type game systems (e.g. Atari 2600, NES 2, etc.) that have only channel 3/4 outputs for conventional TVs, without modifying the systems themselves. A VCR can often be used to overcome that problem, since most VCRs have TV tuners built in.

Commercial use of composite monitors

Examples of non-composite video include