The Old Danish Pointer is a medium-sized breed of dog, white with brown markings, originally used as a pointing dog in Denmark.

Old Danish Pointers (Danish: gammel dansk hønsehund, translated "Old Danish Hen Dog")are strongly built. One of the most charming features of the breed is the great difference between male and female. While the dog is powerful and substantial, the bitch is characterized by being lighter, more spirited, and capricious. 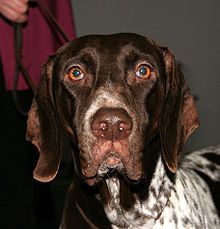 Conveys the impression of a quiet and stable dog showing determination and courage. During the hunt, the dog progresses rather slowly, always maintaining contact with the hunter and accomplishing its task as a pointing dog without creating unnecessary disturbance of the ground. The breed is suited for small as well as large hunting grounds. The name has nothing to do with temperament, but refers to its ability to point out birds of the order Galliformes and specifically birds belonging to the family Phasianidae. Commonly referred to in Danish as Hen birds/Chicken birds. The often used English name, "Old Danish Chicken Dog" is therefore incorrect or at best badly translated.

This is a friendly family dog, as long as it gets its exercise. It is fast and active outdoors and quiet indoors, but is not suitable for apartments or small yards.

The origin of the breed can be traced back to about the year 1710 when a man named Morten Bak, living in Glenstrup near the towns of Randers and Hobro, crossed gypsy dogs through 8 generations with local farmdogs and in this way established a pure breed of piebald white and brown dogs called Bakhounds or Old Danish Pointers. The local farmers called their farmdogs Bloodhounds, but it seems more likely that these hounds were offspring from the Squire’s scent hounds, which in turn were descended primarily from St. Hubert Hounds. Likewise it is probable that the gypsy dogs generally descended from Spanish Pointing Dogs and other breeds of scent hounds, so in many ways St.Hubert Hounds have contributed to the Old Danish Pointer.