The Budapest Metro (Hungarian: Budapesti metró) is the rapid transit system in the Hungarian capital Budapest. It is the second-oldest underground metro system in the world after the London Underground. Its iconic Line 1, dating from 1896, was declared a World Heritage Site in 2002.[1]

The Metro consists of three lines, each designated by a number and a colour. Metro Line 4 is currently under construction; the first section is scheduled to open in 2014.

Line 2 (red) runs generally east to west from the transit hub Örs vezér Square on the city's east side, and provides a connection between Keleti railway terminal and Déli railway terminal through the city centre.

Line 3 (blue) runs northwest from the transit hub Kőbánya-Kispest in the city's southeast, along Üllői Avenue to the city centre, and thereafter north to the district of Újpest.

Except for short stretches near the depots of each line, the system is mostly underground. All lines converge at Deák Ferenc square in the city centre, forming the system's only transfer station. This bottleneck is to be remedied by the opening of Line 4, which will cross Line 2 and Line 3 at different stations.

Line 4 (green) will run southwest to northeast from the transit hub of Budapest Kelenföld railway station in the city's most populous district of Újbuda across the inner city district of Józsefváros to Keleti railway terminal.

The Metro forms a separate system from the Budapest HÉV commuter rail, though Line 2 of the Metro provides transfers to the termini of two of the four HÉV lines. Integration of the incompatible HÉV system into the Metro is a long-term goal, and forms the basis of the proposed Line 5.

The first metro line was conceived as a means of carrying passengers from the city centre to the City Park without the need for surface transport on Andrássy Avenue. The Diet of Hungary approved the metro project in 1870. Construction began in 1894 and was carried out by the German firm Siemens & Halske AG, employing 2,000 workers using state-of-the-art machinery. The line was built entirely from the surface using the cut-and-cover method. Completed on schedule, the metro was inaugurated on May 2, 1896 (the year of the thousandth anniversary of the arrival of the Magyars) by Emperor Franz Joseph.

The original line followed a northeast-southwest route along Andrássy Avenue from Vörösmarty Square to the City Park, a distance of 3.7 kilometres (2.3 mi). There were a total of eleven stations, with nine underground and two above ground; the original terminus at the Zoo has since been replaced. With trains running every two minutes, the line was capable of carrying up to 35,000 passengers per day. (Today it handles about 103,000 passengers on a workday.) One of the original cars has been preserved at the Seashore Trolley Museum. 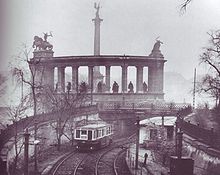 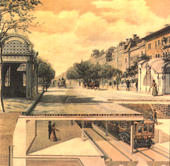 An old image of the first metro line on Andrássy Avenue 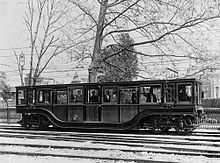 Plans for the next two metro lines were made as early as 1895, defining general north-south and east-west routes. More detailed planning for the second line began in 1942 and construction was launched in 1950 with a decree from the Council of Ministers. The line was originally scheduled for completion in 1955, but construction was put on hold for financial and political reasons from 1954 to 1963. Line 2 finally opened with seven stations on April 4 (a Communist holiday) in 1970. It follows an east-west route, connecting the major Keleti (Eastern) and Déli (Southern) railway stations. It has a joint station with the original line at Deák Ferenc Square, which has since become a transfer point for the third line as well. As of 2010 Line 2 is the only line to cross the Danube and reach Buda, the western part of Budapest.

The first line underwent a thorough refurbishment between 1970 and 1973, which included replacement of its rolling stock and a switch from left-hand drive to right-hand drive for the sake of consistency. In 1973, both lines were extended—the first with one station and the second with four. The lines reached their current lengths of 4.4 kilometres (2.7 mi) and 10.3 kilometres (6.4 mi), respectively. The Budapest Transport Company (BKV) took over operation of the metro that same year.

Planning for Line 3 began in 1963 and construction started in 1970. The first section, consisting of six stations, opened in 1976. It was extended to the south in 1980 with five additional stations, and to the north in 1981, 1984, and 1990, with nine additional stations. With a length of 17 kilometres (11 mi) and a total of 20 stations, it is the longest line in Budapest. Concurrently with the opening of Line 3, the metro adopted a colour-coding scheme for easier identification. The first line was given the colour yellow, the second line red, and the third, blue. Additionally, green is used to mark the suburban railways (HÉV) in and around Budapest.

In the 1980s and 1990s, Line 1 underwent major reconstruction. Of its 11 stations, eight are original and three were added during reconstruction. The original appearance of the old stations has been preserved, and each station feature displays of historical photographs and information. There is also a Millennium Underground Museum in the Deák Ferenc Square concourse where many other artifacts from the metro's early history can be seen.

Line 4 (under construction as of 2007) has a long history, dating back to 1972. In the planning phase, difficulties arose from the medicinal springs (for example, the Gellért Baths) around its planned route. There was a long debate over whether its construction would be safe, what part should be funded by the government and the capital, whether it could be paid for from the Russian state debt towards Hungary, whether the route and length were appropriate, and whether a connector line (see M5 below) would be a better use of funds. If the line is finished by 2014 (which is the best case), its planning and construction will span 41 years, longer than any other Budapest metro line.

Map of the Metro system with proposed future lines

Line 2 has undergone major reconstruction, with much of the track and eight stations already completed. Blaha Lujza tér and Kossuth Lajos tér were renovated in 2004; Batthyány tér, Astoria, and Keleti pályaudvar in 2005; and Déli pályaudvar, Moszkva tér (Name restored to Széll Kálman tér on 12 May 2011), and Deák Ferenc tér in 2006. These are currently the most modern stations in Budapest. Elevators will be installed at Kossuth Lajos tér, Blaha Lujza tér, Keleti pályaudvar, and Astoria, and new air-conditioned carriages will be ordered.

Recently, the Urban and Suburban Transit Association (Városi és Elővárosi Közlekedési Egyesület) presented a plan to unite Line 2 with the HÉV from Gödöllő. The city government did not totally support the plan, but it still may proceed after 2015.

Line 4 will connect southwest Budapest (Buda) to northeastern Budapest (Pest). The first section between Kelenföldi Railway Station and Eastern Railway Station, with a length of 7.5 kilometres (4.7 mi), is due to be completed earliest in late 2014, comprising ten stations. The construction of the second section (with four stations) between Eastern Railway Station and Bosnyák Square, with a length of 3 kilometres (1.9 mi), is not started yet. Site preparation at Bartók Béla Street and Fehérvári Street took place between 2002 and 2004. Pedestrian underpasses, which will later become metro concourses, were built at Móricz Zsigmond körtér and Bocskai út.

In 2005 construction work began at Baross tér, the square in front of the Eastern Railway Station. A new station exit and underpass were constructed, connecting the existing Line 2 station to the surface in the area of the parking lot. The new exit is needed to meet the significant increase in traffic demand expected in the future (an additional 600,000 passengers per day are expected to use the new line). The new exit will also enable the currently operating exit to be closed during construction of the new station. Work was completed by December 2005.

A schedule of the construction work is currently available in the Internet Archive.[3]

Line 5 is in the early planning stages. It will most likely run along the Danube (crossing it at Margaret Island), connecting with suburban railways going north and south. There is currently no planned start date for operation.

There are plans for the extension of Line 3 towards the north (Káposztásmegyer) and the southeast (Ferenc Liszt Airport), perhaps also within the current decade. An extension to Ferenc Liszt airport has been made unlikely by the introduction of a train connection between the airport and the Western Railway Station.

Currently, the only transfer point between the lines is Deák tér, however, forthcoming lines are to have other transfer stations. Line 4 will cross Line 2 and Line 3 at different stations. 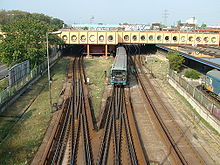 Tickets are validated at the station entrance before taking the escalator, and must be retained until leaving the metro. At validation, the current date and time is printed on tickets along with station information. Tickets are checked manually by the pass controllers, who usually turn up at stations near the escalators, but they may inspect tickets anywhere within the metro system; tickets or passes must be handed over to them on request. Controllers wear a blue ribbon with golden inscription around their wrists, but they may hide it before the actual inspection. (An automated entrance system for the metro has been planned for a long time, as well as on all other public transport in Budapest, but as of 2007, the transport company has not published details.)

Platforms are designated by the terminus of that line; there are signs for these at the station entrances, usually at the escalators, and on the walls of the tunnels in both directions.

None of the stations of either lines 2 or 3 has yet been made handicapped-accessible, including the recently renovated stations. Line 4 will have stations accessible from the street level by elevators, but people in wheelchairs will not be able to use the underpasses when crossing the street. On Line 1 there are only three stations suitable for wheelchair users. 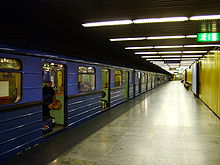 Travel rules are almost the same for all BKV vehicles, and are available at the website of the transport company. These deal with the age and health state of travellers, size of luggage (some chemicals are prohibited), transportation conditions for dogs (ticket/pass, muzzle and lead are required), prohibition of smoking.