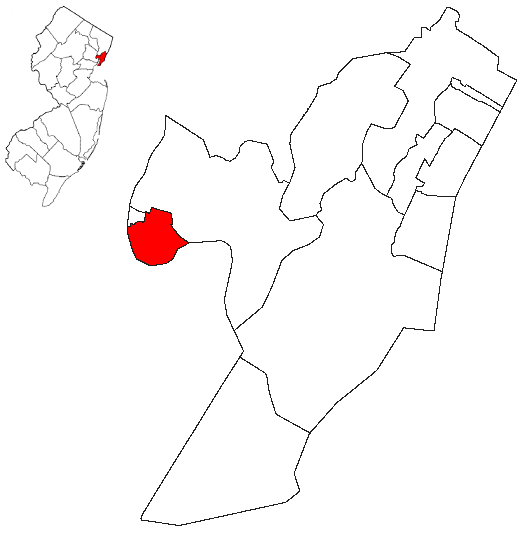 There were 5,136 households out of which 33.7% had children under the age of 18 living with them, 49.8% were married couples living together, 13.9% had a female householder with no husband present, and 29.2% were non-families. 22.5% of all households were made up of individuals and 8.7% had someone living alone who was 65 years of age or older. The average household size was 2.81 and the average family size was 3.27.

The area that is now Harrison was a part of a charter granted to Captain William Sandford of . "New Barbadoes Neck," as the tract was known, consisted of 30,000 acres and it extended from Newark Bay north to present day Rutherford, between the Passaic and Hackensack Rivers. Sandford sent his nephew, Major Nathanial Kingsland, to enter into an agreement for the purchase the land from the Unami Indians, a branch of the Leni Lenapi Indians, the original inhabitants of the area.

In 1825, the , who's main purpose was to divide territories into townships and counties, changed the name of New Barbadoes Neck to the Township of , in Bergen County. Since Lodi was part of Bergen County, matters dealing with the county government and courts had to be taken to Hackensack.

In 1840, the inhabitants of the Township of Lodi joined with present day Secaucus, Bayonne, Jersey City, Hoboken, Weehawken, and Union City and petitioned for the creation of a new county due to the great distance which the petitioners had to travel to reach the count seat in Hackensack. This appeal resulted in the creation of Hudson County and the first mention of Harrison occurs in the law which was passed on , . The Township of Harrison was thereby established.

The first committee meeting of the Township of Harrison was held on , , and it is widely accepted that Harrison was named for President , who was elected that year.

In 1867 General N. N. Halstead succeeded in getting the necessary laws passed in Trenton and in March, Kearny became a separate Township from land that was a part of Harrison, which included East Newark at the time. (East Newark later seceeded from Kearny, establishing their own Borough.)

The first in was set up at Schuyler Copper mines, to help drain water from the mines. While campaigning for re-election, President coined the town's motto, "The Beehive of Industry," which is still used today.

As the U.S. moved into the 20th century, these facilities played a major role in the development of revolutionary new products for both the private and public sector, peaking during . The small town of about only 14,000 residents, had more then 90,000 workers commuting into it on a daily basis. [ [http://www.townofharrison.com] ] , Town of Harrison. Accessed , .]

Harrison is governed under the Town form of New Jersey municipal government. The government consists of a Mayor and Town Council comprising eight council members. A Mayor is elected directly by the voters to a four-year term of office. The Borough Council consists of eight members elected to serve four-year terms on a staggered basis.

The current Mayor and Council members are:

The serves students in kindergarten through twelfth grade. The district is one of 31 s statewide. [ [http://www.nj.gov/cgi-bin/education/abbotts/abbotturls.pl?string=code&maxhits=100 Abbott Districts] , . Accessed , .]

The Harrison Public School District is participating in the . For the 2005-06. school year parents can request to transfer a child from the Washington School, designated by the State of New Jersey as a Category I School, to another school which is not a Category I School. Since there is only one elementary school in Harrison, parents can request a transfer to the under the Choice program. A transfer request will depend upon the capacity of the selected Hoboken school. [ [http://www.harrison.k12.nj.us/choice.htm Inter District Public School Choice Program] , . Accessed , .]

In September 2007, Harrison realigned the grades being housed in each of the school buildings in town. The new Harrison High School located on Hamilton Street between Kingsland and Schuyler Avenues opened to students in grades 9-12. As a result, the old Harrison High School building, located on 1 North 5th Street, was renamed as Washington Middle School. The old Washington Middle School, in turn, located on Hamilton Street between North 2nd and North 3rd Streets, now houses the 4th and 5th grades that formerly used the top floors of Holy Cross School. Holy Cross School has since been vacated by the Harrison Public School district.

The Harrison station on the PATH system offers service to Newark, Jersey City, Hoboken and . The , built in the 19th Century by the and now owned by , carries trains, and passes through the city on the same alignment as the PATH. There was a stop on the Northeast Corridor in Harrison, but it was eliminated due to the ease of picking up trains in Newark at Penn Station.

The closest airport in New Jersey with scheduled passenger service is , located 4.8 miles away in Newark / Elizabeth. 's is 20.2 miles away in via the .

Portions of Harrison are currently undergoing transit-oriented redevelopment under a plan developed by the community planning and design firm, Heyer, Gruel & Associates LLC and adopted by the Harrison Redevelopment Agency. With the construction of new high school athletic facilities, the Harrison Board of Education sold the former John F. Kennedy Stadium to the Roseland Property Co./Millennium Homes development group, where currently new townhouses are being built. The Hampton Inn and Suites Newark/Harrison Riverwalk Hotel opened on , across from Newark along the . The area stretching from the PATH train station south to the Harrison/Newark border has been designated as a redevelopment zone (275 acres, or about 35% of the town). Plans are now underway to transform the aforementioned area of the town from deindustrialized, abandoned factories into a containing high-rise office complexes and street-level retail. The current design will introduce seven- to nine-thousand new housing units. Redevelopment groups participating in these projects have separated the designated site into two zones - Harrison Commons and the Riverbend District. The Harrison Commons initiative, led by companies the [http://www.thepegasusgroup.com/ Pegasus Group, LLC] and [http://www.appliedco.com/ Applied Development] , extends from the south side of the I-280 overpass towards the north side of the PATH station and will feature building designs depicting "modern 19th century architecture," headed by Minno & Wasko Architects, as well as Torti Gallas and Partners. The [http://www.advancerealtygroup.com/ Advance Realty Group] , along with Red Bull GmbH, oversees the Riverbend site, consisting of the area stretching from the south side of the PATH station to the Passaic River.

After years of delays, and the Anschutz Entertainment Group (AEG) announced in 2006 that Red Bull Arena will be the new home of the team, . The new stadium is part of the large redevelopment plan for Harrison. The stadium will hold 25,000 fans and will feature a European style roof. In addition to soccer, Red Bull Arena will be able to host games for professional men's lacrosse and international rugby teams as well as championship matches on the collegiate and secondary school levels. The stadium is expected to be open in the summer of 2009.

In July 2006, property owner Steve Adler filed a lawsuit in Federal District Court alleging, among several grounds, that the Harrison Redevelopment Agency was illegally formed and its actions are void . [ [http://www.theobserver.com/currentissue/adler.shtml Adler far from pleased with redevelopment] , "", , .] The lawsuit alleges that the composition of the Harrison Redevelopment Agency violates guidelines for membership of the board, the Town Ordinance promulgating the board, and the State Statute empowering the redevelopment agency. The board from its onset did not have professionals of various fields as members. Rather, it had, in violation of the town ordinance and state statute, more than two members who were political officials or employees of the Town of Harrison. If the lawsuit is successful, all designated developers could be stripped of their development designation. The court voted in favor of the agency in 2007. Rather than pursuing a court appeal, Adler settled the case September 2008 by accepting an undisclosed cash payment from the redevelopment agency.

*Harrison had the longest-serving Mayor in American history, , who was first elected in 1946 and served for 48 years, from 1947 to 1995, being elected to 24 two-year terms. He also served one term in the New Jersey State Senate, from 1979 to 1983. [Nieves, Evelyn. [http://query.nytimes.com/gst/fullpage.html?res=990DE6D8163FF93AA15750C0A962958260 "OUR TOWNS; 24 Terms Are Enough, Harrison Mayor Decides"] , "", , . Accessed , .]
*Harrison has been featured in portions of the HBO hit series "". In 2000, the high school was used as the location of an open casting call by HBO which brought 15,000-plus mafia hopefuls to the town, doubling the town's population and bringing traffic to a standstill. [Mallozzi, Vincent M. [http://query.nytimes.com/gst/fullpage.html?res=9C04E2DF123AF930A15754C0A9669C8B63 "A Big Crowd That Aspires To Be a Mob"] , "", , . Accessed , . "Almost 30 years later, I got in line for another part. I was one of thousands who showed up at Harrison High School today for a much-publicized casting call for those interested in auditioning for parts in the hit HBO series "The Sopranos," which happens to be my favorite.... By that time, Lt. Charles Trucillo of the Harrison Police Department estimated, 4,000 or 5,000 people were already in line."]
* performed on the high school's stage before breaking into acting.