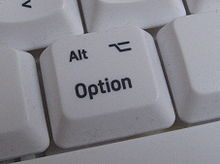 The Option key may be labeled Alt, or Option, or both, and sometimes the symbol.

The Option key is a modifier key present on Apple keyboards. It is located between the Control key and Command key on a typical Mac keyboard. There are two option keys on modern Mac desktop and notebook keyboards, one on each side of the space bar.

Apple commonly uses the symbol ⌥ (U+2325, "OPTION KEY") to represent the Option key. From 1980 to 1984, on the Apple II family, this key was known as the closed apple key, and had a black line drawing of a filled-in apple on it. (See command key for information about the history and the "open apple".)

Since the 1990s, "alt" typically appears on the key, as well, for use as an Alt key with non-Mac software, such as Unix and Windows programs. However, the Option key in a Mac operating system functions differently from the Alt key under other Unix-like systems or Microsoft Windows. Most notably, it is not used to access menus or hotkeys, but is instead used as a modifier for other command codes, and also to provide easier access to various accents and symbols. In this regard, it is akin to the AltGr key, found on some IBM-compatible PC keyboards.

Use of the Option key

The use of the Option key is similar to that of the AltGr key on European keyboards of IBM-compatible PCs, in the sense that it can be used to type additional characters, symbols and diacritical marks. The options available differ depending on the keyboard input locale that the user has selected. For example, in the U.S. English keyboard input, Option+a produces the "å" character, and Option+4 produces the cent sign "¢".

The Option key can also provide access to dead key functionality. For example, holding down option while pressing ` will create a highlighted grave accent which will be added to the next letter if possible – so if an e is then pressed, the resultant character is è. If an r is pressed instead, the two characters are not compatible so the result is `r.

The highlighted orange keys show the accents available from the combination of the Option key and the keyboard characters e ` i n u. The accent then can be applied to associated letters both lower and uppercase. The additional characters a Mac will produce are a combination of both the Option key and the ⇧ Shift key pressed down together. With this combination pressed the keyboard will now produce a different set or an uppercase version of the previous set in some cases.

The Option key is often used in conjunction with special keys like tab, delete, and return to provide alternate functions. For example, Option+Return typically produces a line break that is not interpreted as a paragraph break.[citation needed]

The key is also used to provide for alternative menu items and buttons when pressed down. Examples:

The iPhoto example is an example of a control whose behavior is governed by a preference which is temporarily inverted by holding down the Option key. The preference in this case is which way to rotate the image: If the user changes the default rotation direction in the Preferences to clockwise, holding down Option will make the button rotate counterclockwise instead, and vice versa. It is common for such controls — that is, those whose behavior is governed by a preference — to be invertible in this way.

In text areas, the Option key can be used for quick keyboard navigation.

When keeping the Option key pressed when using the mouse, the mouse action can change behaviour

Some applications make unique uses out of the option key: