The moonwalk or backslide is a dance technique that presents the illusion of the dancer being pulled backwards while attempting to walk forward.[1] A popping move, it became popular around the world after Michael Jackson executed the dance move during a performance of "Billie Jean" on Motown 25: Yesterday, Today, Forever on March 25, 1983. It subsequently became his signature move, and is now one of the best-known dance techniques in the world.[2][3]

An illusion is involved in creating the appearance of the dancer gliding in a backwards direction. Initially, the front foot is held flat on the ground, while the back foot is in a tiptoe position. The flat front foot remains on the ground but is slid lightly and smoothly backward past the tip-toe back foot. What is now the front foot is lowered flat, while the back foot is raised into the tiptoe position. These steps are repeated over and over. Variations of this move allow the backslider to also appear to glide forwards, sideways, and even in a circle. 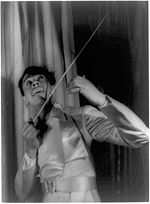 Cab Calloway executed steps similar to the moonwalk (sidewalk/toe stand) as early as 1932.

There are many recorded instances of the moonwalk, similar steps are reported as far back as 1932, used by Cab Calloway.[4] In 1985, Calloway said that the move was called "The Buzz" when he and others performed it in the 1930s.[5] In 1955 it was recorded in a performance by tap dancer Bill Bailey. He performs a tap routine, and at the end, backslides into the wings.[6] The French mime artist Marcel Marceau used it throughout his career (from the 1940s through the 1980s), as part of the drama of his mime routines. In Marceau's famous "Walking Against the Wind" routine Marceau pretends to be pushed backwards by a gust of wind.[7]

In a November 1969 episode of H.R. Pufnstuf, Judy Frog teaches everyone a new dance called "The Moonwalk", which includes two instances of a stationary moonwalk.[8]

David Bowie was probably the first rock musician to perform it, though he remained stationary.[9][dead link] An embryonic version of the move appears in Bowie's 1960s mime pieces; he had studied mime under Étienne Decroux, Marcel Marceau's teacher,[10] and under Lindsay Kemp, who had trained with Marceau. By the time of Bowie's 1974 Diamond Dogs Tour (which was choreographed by Toni Basil), Michael Jackson was among those attending Bowie's Los Angeles shows, later remarking on Bowie's strange moves.[11] James Brown used the move,[12] and can be seen performing it in the 1980 film The Blues Brothers. Another early moonwalker was popper and singer Jeffrey Daniel, who moonwalked in a performance of Shalamar's "A Night To Remember" on Top of the Pops in the UK in 1982, and was known to perform backslides in public performances (including weekly Soul Train episodes) as far back as 1974.[13] Michael Jackson was a fan of Jeffrey Daniel's dancing and would eventually seek him out. During that time, Michael saw Derek `Cooley` Jaxson and Geron `Casper` Candidate, do the 'backslide' on Soul Train. Soon after the team of Casper and Cooley were asked by Michael Jackson's management to teach the "backslide" to Michael. Casper and Cooley worked with Jackson for three days at which time Cooley Jaxson was let go by Michael due to a job with sesame street live and the last two days Geron 'Casper' Candidate taught and helped Michael to perfect the 'backslide.' From that day on it was forever renamed the Moonwalk. Also in 1982, Debbie Allen performs a moonwalk during a scene with Gwen Verdon in Season 1, Episode 10 ("Come One, Come All") of the 1982 TV series Fame.[14] There is a similar dance to the moonwalk as well. It is known today as the 'airwalk'. 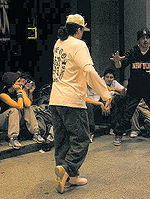 A street dancer in Madrid.

In the movie Flashdance, released in 1983, the move was used in the breakdance scene, where a street performer, with an umbrella prop, mimed the wind blowing him backward as he first walks forward, fighting the wind, then starts moonwalking backwards, this scene was also shown in the Malcom McClaren film clip Buffalo Gals) .[15]

Alexei Kovalev has also been known for using the moonwalk in his NHL career. He performed the move after scoring a goal for the Pittsburgh Penguins against the Philadelphia Flyers on February 7, 2001 to make the score 9-4 in favor of Pittsburgh late in the third period. Then, on January 3, 2010, after scoring 4 goals and recording 1 assist as an Ottawa Senator, also against Philadelphia, Kovalev moonwalked on to the ice after being named one of the stars of the game. Kovalev also did the moonwalk after scoring on a penalty kick in a 2008 celebrity charity soccer game in Montreal.