No. 158 Squadron RAF was a World War I proposed ground attack squadron that did not became operational in time to see action, and a World War II bomber squadron. After World War II had ended in Europe the squadron operated in the transport role until disbandment in December 1945.

Formation in World War I 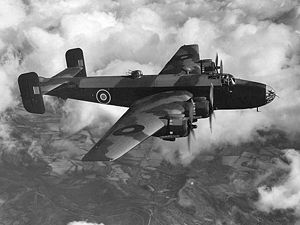 The squadron reformed at RAF Driffield on 14 February 1942, via the renumbering of No. 104 Squadron, which was equipped with the Vickers Wellington medium bomber and 158 sqn used these on night raids to Germany and occupied France[10].

By 7 May 1945 World War II in Europe had finished, and the squadron was transferred to RAF Transport Command, re-equipped with the Short Stirling Mk.V. The squadron moved to Stradishall on 17 August 1945, where it disbanded on 31 December 1945.

One of the squadrons aircraft, a Handley page Halifax B.Mk.III, serial no. LV907, coded NP-F and nicknamed "Friday the 13th", completed a remarkable 128 operational missions. Incredibly this precious aircraft was not saved from the scrapheap after being displayed on Oxford street in London[3], only a section of the nose from the aircraft was saved and is exhibited at the RAF Museum Hendon. The Halifax that is displayed at the Yorkshire Air Museum is made up of parts of various aircraft and painted as LV907, in honour of the aircraft and its crew.