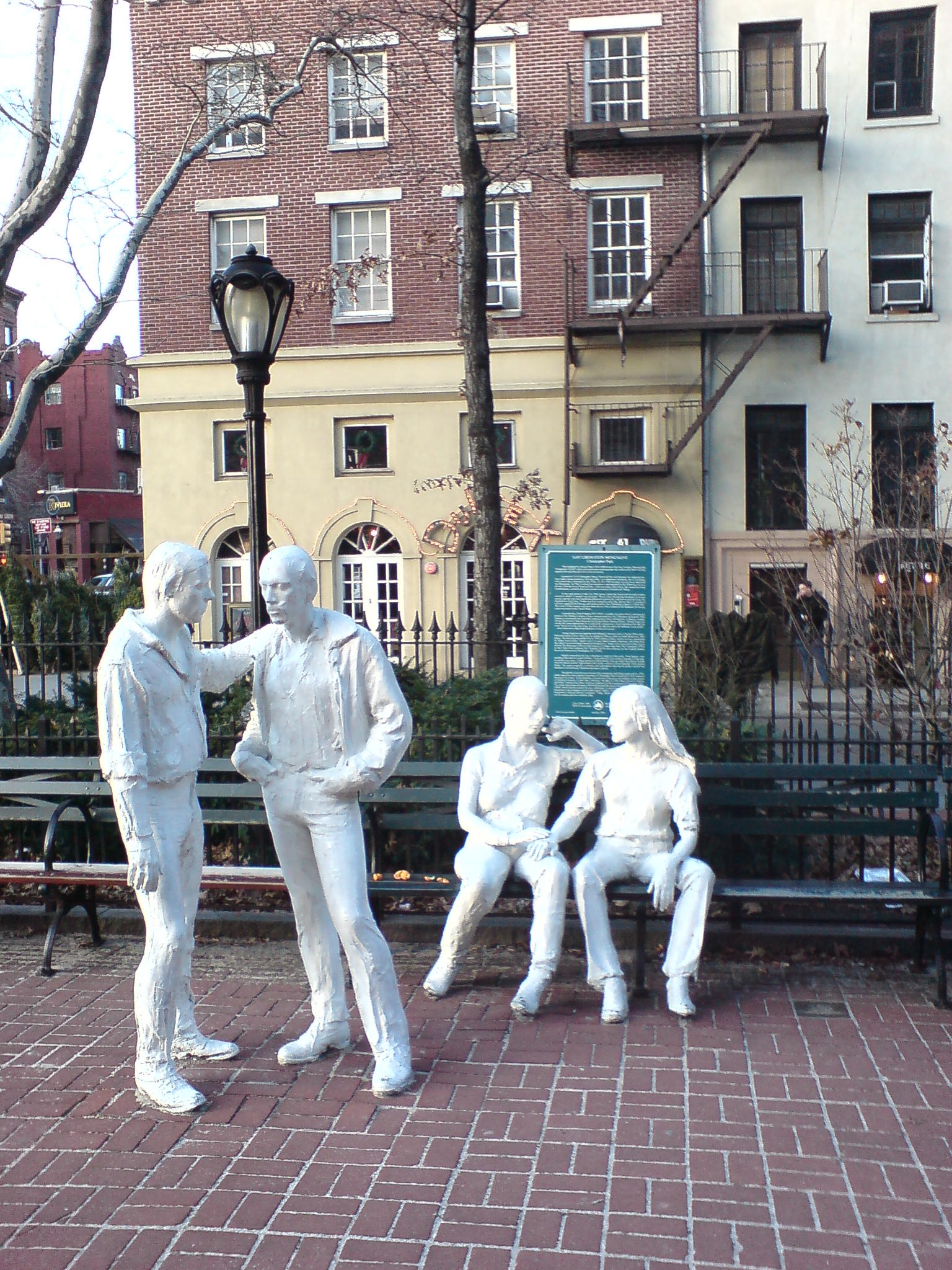 George Segal (, , New York - , New Brunswick, New Jersey) was an American painter and associated with the movement. He was presented with a in 1999.

Although Segal started his art career as a painter, his best known works are cast lifesize figures and the x the figures inhabited. In place of traditional techniques, Segal pioneered the use of s (plaster-impregnated gauze strips designed for making s) as a sculptural medium. In this process, he first wrapped a model with bandages in sections, then removed the hardened forms and put them back together with more plaster to form a hollow shell. These forms were not used as molds; the shell itself became the final sculpture, including the rough texture of the bandages. Initially, Segal kept the sculptures stark white, but a few years later he began painting them (usually in bright ). Eventually he started having the final forms cast in bronze, sometimes ted white to resemble the original plaster.

Segal's figures had minimal color and detail, which gave them a ghostly, melancholic appearance. In larger works, one or more figures were placed in anonymous, typically urban environments such as a street corner, bus, or diner. In contrast to the figures, the environments were built using found objects. An example of this work is the sculpture, "Chance Meeting", which sold in 2001 for US $600,000. It was one of his highest selling works. The work was created in 1989 and was cast in bronze. [ [http://artsalesindex.artinfo.com/artsalesindex/asi/lots/8059513 Auction Result: George Segal's "Chance Meeting"] ]

From the 1950s until his death Segal lived on a chicken farm in . [Turner, Elisa. [http://infoweb.newsbank.com/iw-search/we/InfoWeb?p_action=doc&p_docid=0EB4DBDD23876098&p_docnum=4&p_queryname=NaN&p_product=NewsBank&p_theme=aggregated4&p_nbid=H60S48QAMTE4NTg0NzQ0OS4yODY4NjU6MTo3OnJhLTE4ODg "SEGAL EXHIBIT EVOKES QUIET DIGNITY OF HUMDRUM LIVES"] , "", , . Accessed , . "That compassion is also evident in the work ethic and personality of this artist, who's called himself a "Depression baby" and who speaks fondly of South Brunswick, N.J., where he's lived since the 1940s, as a "working man's town."] He only ran the chicken farm for a few years, but he used the space to hold annual picnics for his friends from the art world. His location in central also led to friendships with professors from the Rutgers University art department. Segal introduced several Rutgers professors to , and took part in Cage's legendary experimental composition classes. coined the term to describe the art performances that took place on Segal's farm in the Spring of 1957. Events for also took place there. Segal was married to Helen Segal from 1946 until his death in 2000.

*"George Segal" (1979). Directed by Michael Blackwood. Documentary about Segal, who discusses and is shown creating his bronze sculpture "Abraham and Isaac", which was originally intended as a memorial for the of 1970.