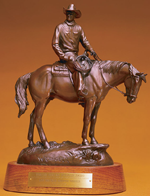 The Bronze Wrangler is an award presented annually by the to honor the top works in Western , , and .

The awards were first presented in . The Wrangler is a bronze sculpture of a cowboy on horseback, and is designed by artist .