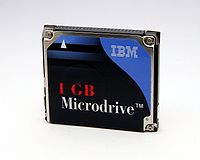 Microdrive (MD) is a brand name for a miniature, 1-inch hard disk designed to fit in a CompactFlash (CF) Type II slot. The release of similar drives by other makers has led to them often being referred to as 'microdrives'. However, 'microdrive' is not a genericized trademark[1] and manufacturers other than IBM up to 2003 and Hitachi after do not officially refer to these drives as Microdrives. Some other companies such as Sony have licensed the name and sell re-branded versions, others such as Seagate have their own designs which fit in the same form factor.

Front view of a Seagate brand Microdrive. This particular device was removed from an Apple iPod mini, and is intended only for embedded use.

Same Seagate device, however, rear view. Note the Apple Inc. logo on the lower left side of the label. See this image of a iPod mini with Microdrive intact.

These drives fit into any CompactFlash II slot; however, they may consume more power than flash memory (currents on the order of 190 mA, peak 310 mA, at 3.3 V) and therefore may not work in some low-power devices (e.g., handheld computers). Nevertheless, they have some benefits over flash memory in terms of the way data is stored and manipulated. Microdrives can store 8 GB or more, but must be formatted for a file system which supports this capacity, such as ext3 or NTFS or FAT32 which might not be supported by older CompactFlash hosts. To avoid this problem, the operating system may partition a drive so that each filesystem is smaller than 4GB.

As of 2011, Microdrives are viewed as obsolete, having been eclipsed by solid-state flash media in read/write performance, storage capacity, durability, physical size, and price.

In 2004, a Chinese manufacturer called GS Magic started marketing small form factor HDDs for CF. They have, however, been sued by Hitachi for patent infringement of the IBM design [1] (as opposed to Seagate, which used its own technology). These drives are generally cheaper and of lower quality than Hitachi and Seagate drives and have received a plethora of bad reviews.*

Date of release of large sizes.

As of 2006 the most commonly-seen microdrives are the smaller sizes, up to 1GB. Larger (2GB to 8GB) drives, such as the 4GB and 6GB Hitachi models, the 5GB and 8GB Seagate models and the 2.2GB Magicstor drive are also available but are often embedded in Pocket hard drives, "high end" mobile phones, music players, and other entertainment devices. Such embedded devices are far more popular than the loosely-sold Microdrives intended as a CompactFlash card alternative.

In the United States most electronics shops do not sell separate Microdrives as they may find it economically unviable to stock them due to the fast-moving nature of the market, however they are readily available on several websites. But in most developed Asian cities such as Hong Kong and Tokyo, a 8GB version of the Seagate ST1 are selling at the price (as of second quarter 2006) as low as USD $220 in retail shops, and under USD $50 on eBay.

Sometimes when a device with an integrated Microdrive stops working the device is taken apart and stripped of its Microdrive, which is then sold on. Unfortunately, Microdrives taken from such devices may not work in digital cameras. These drives must be accessed using ATA mode, which is not supported in all devices. Such drives, therefore, do not sell for nearly as much as CF-enabled Microdrives. An ATA-only Microdrive can be used in simple pass-through CompactFlash to IDE/SATA adapters for embedded use, however most digital cameras and some card readers will be unable to access the device. 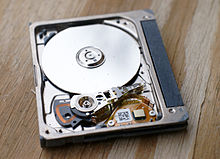 Inside a 1-inch Seagate drive

Many smaller sized models are no longer offered, as they have been supplanted by flash memory.

IBM and Hitachi models fitted with 128 KB of cache memory

These Seagate models are fitted with 2 MB of cache memory