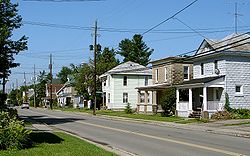 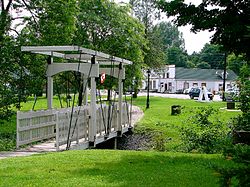 Osgoode Township is a former township that is now a part of the city of Ottawa, Ontario, Canada. It encompassed the same area that is currently Osgoode Ward. The township along the Rideau River was established in 1798 and incorporated in 1850. It was an independent township in Carleton County until its amalgamation with the city in 2001. It remains a largely rural area with only some 20,000 inhabitants as of 2006. On Ottawa city council it is represented by its former mayor Doug Thompson.

Several branches of the Castor River, a tributary of the South Nation River, flow through the township.

The township took its name from William Osgoode, the first Chief Justice of Upper Canada.[1]

Originally the territory of the Mississaugas Amerindians, the land for the township was acquired by the British in the 1780s. But not until 1827 did the first European settlers, the McDonnell and York families, arrive. The early settlers were attracted to the area by the good farm land and the large stands of white pine and white oak. The first two township roads intersected in Baker's Corners (now Metcalfe). Further settlement in the township followed the construction of the Rideau Canal and the railway through Osgoode.[1]

According to the Canada 2001 Census: