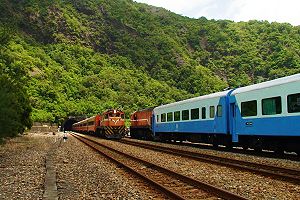 Trains in a passing loop

A passing loop (also called a passing siding, crossing loop, crossing place or, colloquially, a hole) is a place on a single line railway or tramway, often located at a station, where trains or trams in opposing directions can pass each other.[1] Trains/trams in the same direction can also overtake, providing that the signalling arrangement allows it. A passing loop is double ended and connected to the main track at both ends, though a dead end siding, which is much less convenient, can be used. A similar arrangement is used on the gauntlet track of cable railways and funiculars, and in passing places on single-track roads.

Ideally, the loop should be longer than all trains needing to cross at that point. If one train is too long for the loop it must wait for the opposing train to enter the loop proceeding, taking a few minutes. Ideally, the shorter train should arrive first and leave second. If both trains are too long for the loop, time-consuming "see-sawing" (or "double saw-by") operations are required for the trains to cross.[2]

On railway systems that use platforms for passengers to board and disembark trains, especially high level platforms, platforms may be provided on both main and loop tracks or just either the main or loop track. 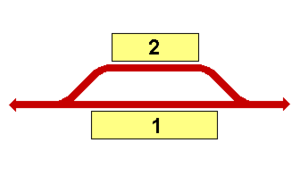 The main line has straight track, while the loop line has low speed turnouts at either end. If the station has only one platform, then it is usually located on the main line.

Platform road and through road 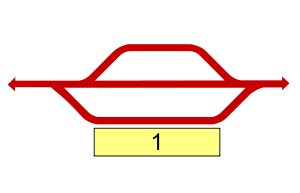 The through road has straight track, while the platform road has low speed turnouts at either end.

A possible advantage of this layout is that trains which wish to pass straight through the station can do so uninterrupted (they do not have to reduce their speed to pass through the curve).

Since there is only one passenger platform, it is not convenient to cross two passenger trains.

Up and Down working 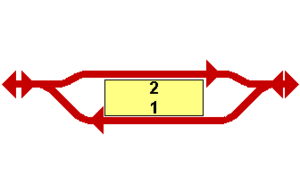 Crossing loop: up and down working

Trains take the left-hand track (for example) in their direction of running. Low speed turnouts restrict the speed in one direction. Two platforms are needed and they can be island platform or two side platforms. With an Up and Down loop, overtaking is not normally possible as some of the necessary signals are absent.

Crossing loops using Up and Down Working are very common with British practice. For one thing, there are fewer signals if the tracks in the station are signalled for one direction only, and also there is less likelihood of a collision caused by signalling a train onto the track belonging to the opposing train.

The speed restriction in one direction can be eliminated with higher speed turnouts, but this may require power operation as the longer and heavier high speed turnouts may be beyond the capability of manual lever operation.

If a crossing loop is several times the length of the trains using it, and is suitably signalled, then trains proceeding in opposite directions can pass (cross) each other without having to stop or even slow down. This greatly reduces the time lost by the first train to arrive at the crossing loop for the opposing train to go by. This system is also referred to as a dynamic loop.

In Sweden, the passing loops are generally 750 m long, made for cargo trains. Passenger trains are usually much shorter, at least on most single track lines, less than 200 m. The signalling system now allows two passenger trains to cross without stopping, but one has to slow down to 40 km/h, because of the limited length of the loop and the sharp curves in the switch points.

For Norway an investigation has been made about future high speed railways, using 250 km/h as cruise speed. The most promising link would be a new Oslo-Trondheim railway, which is suggested to be single track along a 370 km long route. It is suggested to have about 15 km long passing loops, more like 15 km double track, located about 80 km apart. This would enable passing in 160 km/h, but there could be only one train per hour per direction on the rail line. See also High-speed rail in Norway.

Since space (length) is short, crossing loops do not normally have an overlap (safety margin) between the starting signals and the end of the double line. With the passing lanes and witht the new ARTC policy generally, overlaps of about 500m and 200m respectively, overlaps are provided.

Many crossing loops are designed to operate automatically in an unattended mode. Such loops may be track circuited with home signals cleared by the approaching train. Some loops have the points in and out of the loop operated manually, albeit more recent examples have so-called self restoring switches that allow trains to exit a loop without needing to change the points.

Other forms of remote operation included Centralized traffic control, where a train controller changes points and signals from a remote office; and driver operated points, which enable train crews to use a radio system to set the points from a distance.

The design of crossing loops may have to be modified where there are severe gradients that make it difficult for a train to restart from a stationary position, or where the terrain is unsuitable for a normal loop.

One change would be to include runaway catchpoints on the downhill end, such as at Tumulla.

One oddity was Dombarton, New South Wales in Australia, where the crossing loop built to divide a long single line section on an extreme 1 in 30 (3.3%) gradient. The "loop" was built as a miniature zig-zag with a single track lower switchback on one side and a double track upper switchback on the other side, with a dive tunnel under the through track connecting the two.

A crossing loop on steep gradient may have catchpoints on the downhill end to reduce the impact of runaways.

Line capacity is partly determined by the distance between individual crossing loops. Ideally these should be located at inverse integer intervals along the track by travel time. The longest section between successive crossing loops will, like the weakest link in a chain, determine the overall line capacity.

It is best if all crossing loops are longer than the longest train. Two long trains can cross at a short loop using a slow so-called see-saw process.

Overtaking sidings or loops can also be provided on double lines, one on each side, and these can be called Refuge Sidings which are deadended or Refuge Loops as the case may be. 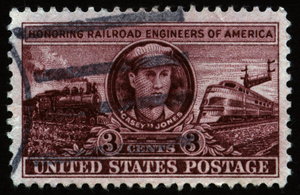