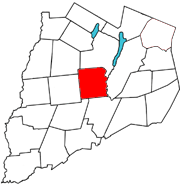 Town of Hartwick is located in the middle of the county, southwest of Village of Cooperstown. Hartwick, New York is the largest Hartwick in the world in terms of population.

It was named after Minister (1714&ndash;1796), an early landowner of the town. Hartwick had bought the area (the Hartwick Patent, granted 1761) that now constitutes the township from the Mohawk Indians in 1763. Discontent with the sparsely settled communities of Germans in the Mohawk Valley to the north, which Hartwick believed made people immoral, he bought the original Hartwick Patent with the intent to build a "New Jerusalem." This did not occur as Hartwick stipulated, according to conditions in his lease that residents look to him as their religious superior, and by the 1790s the shrewd land speculator William Cooper had sold most of Hartwick's land against his wishes.

Instead of a New Jerusalem, Hartwick requested in his will that a Lutheran seminary be opened with his estate. Upon Hartwick's death in 1797, efforts to do this started but were complicated by the fact that Hartwick left his estate to . Fifteen years later, Hartwick Seminary - the oldest Lutheran Seminary in the United States - opened in 1812. The seminary closed in the 1920s, and the proceeds were used to open in nearby Oneonta in 1925.

The town was established in 1802 from the Town of Otsego. In 1803, the north town line was altered.

People of note in Hartwick

* , born in Hartwick in 1811, later congressman and governor in Illinois.

is a north-south highway in the western side of Hartwick.

Otsego Creek flows through the western part of Hartwick. The defines the east town line.

There were 850 households out of which 36.6% had children under the age of 18 living with them, 54.7% were married couples living together, 11.1% had a female householder with no husband present, and 29.2% were non-families. 24.7% of all households were made up of individuals and 10.9% had someone living alone who was 65 years of age or older. The average household size was 2.59 and the average family size was 3.06.

Communities and locations in Hartwick