The firm is the direct predecessor of two of the largest banking institutions in the United States and globally, JPMorgan Chase and Morgan Stanley.

In 2000, J.P. Morgan was acquired by Chase Manhattan Bank to form JPMorgan Chase & Co., one of the largest global banking institutions. Today, the J.P. Morgan brand is used to market certain JPMorgan Chase wholesale businesses, including investment banking, commercial banking and asset management. The J.P. Morgan branding was revamped in 2008 to return to its more traditional appearance after several years of depicting the "Chase symbol to the right of a condensed and modernized "JPMorgan". 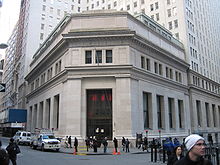 The origins of the firm date back to 1854 when Junius S. Morgan joined a London-based banking business headed by George Peabody. Over the next ten years, Junius took control of George Peabody & Co., changing the name to J.S. Morgan & Co. Junius's son, J. Pierpont Morgan, went to work with his father and would later found what would become J.P. Morgan & Co.

J.P. Morgan & Co. was founded in New York in 1871 as Drexel, Morgan & Co. by J. Pierpont Morgan and Philadelphia banker Anthony J. Drexel, founder of what is now Drexel University.[2] The new merchant banking partnership served initially as an agent for Europeans investing in the United States.

The House of Morgan

In 1895, Drexel, Morgan & Co. became J.P. Morgan & Co. It financed the formation of the United States Steel Corporation, which took over the business of Andrew Carnegie and others and was the world's first billion-dollar corporation. In 1895, it supplied the United States government with $62 million in gold to float a bond issue and restore the treasury surplus of $100 million. In 1892, the company began to finance the New York, New Haven and Hartford Railroad and led it through a series of acquisitions that made it the dominant railroad transporter in New England. 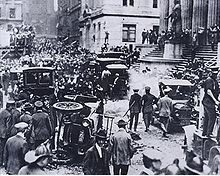 Built in 1914, 23 Wall Street was known as "The Corner" and "The House of Morgan," and for decades the bank's headquarters was the most important address in American finance. At noon, on September 16, 1920, an anarchist bomb exploded in front of the bank, killing 38 and injuring 400. Shortly before the bomb went off, an unknown person placed a warning note in a mailbox at the corner of Cedar Street and Broadway. The warning read: "Remember we will not tolerate any longer. Free the political prisoners or it will be sure death for all of you. American Anarchists Fighters." While theories abound about who was behind the Wall Street bombing and why they did it, after twenty years of investigation the FBI rendered the file inactive in 1940 without ever finding the perpetrators.

In August 1914, Henry P. Davison, a Morgan partner, traveled to the United Kingdom and made a deal with the Bank of England to make J.P. Morgan & Co. the sole underwriter of war bonds for the UK and France. The Bank of England became a fiscal agent of J.P. Morgan & Co., and vice versa. The company also invested in the suppliers of war equipment to Britain and France, thus profiting from the financing and purchasing activities of the two European governments.

During the early 1920s, J.P. Morgan & Co. was active in promoting banks in the southern hemisphere, including the Bank of Central and South America.

In 1933, the provisions of the Glass–Steagall Act forced J.P. Morgan & Co. to separate its investment banking from its commercial banking operations. J.P. Morgan & Co. chose to operate as a commercial bank, because after the stock market crash of 1929, investment banking was in some disrepute and commercial lending was perceived to be more the profitable and prestigious business. Additionally, many within J.P. Morgan believed that a change in the political climate would allow the company to resume its securities businesses but that it would be nearly impossible to reconstitute the bank if it were disassembled.

In the years following the spin-off of Morgan Stanley, the securities business proved robust, while the parent firm, which incorporated in 1940,[3] was a little sleepy. By the 1950s J.P. Morgan was only a mid-size bank. In order to bolster its position, in 1959, J.P. Morgan merged with the Guaranty Trust Company of New York to form the Morgan Guaranty Trust Company. The two banks already had numerous relationships between them and had complementary characteristics as J.P. Morgan brought a prestigious name and high quality clients and bankers while Guaranty Trust brought a significant amount of capital. Although Guaranty Trust was nearly four times the size of J.P. Morgan at the time of the merger in 1959, J.P. Morgan was considered the buyer and nominal survivor and former J.P. Morgan employees were the primary managers of the merged company.

J.P. Morgan & Co. logo prior to its merger with Chase Manhattan Bank in 2000

JPMorgan logo prior to its 2008 rebranding

By the late 1990s, J.P. Morgan had emerged as a large but not dominant commercial and investment banking franchise with an attractive brand name and a strong presence in debt and equity securities underwriting. Beginning in 1998, J.P. Morgan openly discussed the possibility of a merger, and speculation of a pairing with banks including Goldman Sachs, Chase Manhattan Bank, Credit Suisse and Deutsche Bank AG were prevalent.[5] Chase Manhattan had emerged as one of the largest and fastest growing commercial banks in the United States through a series of mergers over the previous decade. In 2000 Chase, which was looking for yet another transformational merger to improve its position in investment banking, merged with J.P. Morgan to form J.P. Morgan Chase & Co.[6][7]

The combined JPMorgan Chase would become one of the largest banks both in the United States and globally offering a full complement of investment banking, commercial banking, retail banking, asset management, private banking and private equity businesses. In 2011, JPMorgan Asset Management was ranked number two in Institutional Investor's Hedge Fund 100 ranking, with $54.2 billion in assets under management.[8]