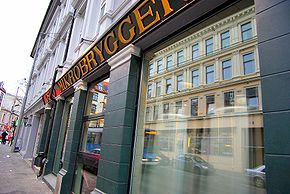 Oslo Mikrobryggeri is a Microbrewery & pub in central Oslo

Beer in Norway has a long history, going back at least 1000 years. Until around 200 years ago no farm was complete without a brewhouse. From the early 20th century brewing was industrialized and home brewing outlawed. Since then, significant consolidation in the brewing sector has reduced the number of major breweries to just a handful. With the exception of the malty juleøl (Christmas beer), most beer styles brewed in Norway today trace their ancestry to central Europe. 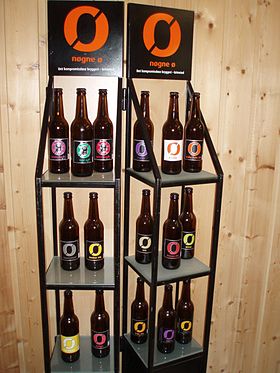 Currently, the Norwegian beer market is dominated by two large brewers: The giant Carlsberg-Ringnes based in Oslo and Copenhagen, Denmark, and the smaller Hansa-Borg, based in Bergen and Sarpsborg. Each produce beer branded in a variety of traditional Norwegian beer brands, as well as foreign brands bottled on licence. This system is a result of the large-scale consolidation of Norwegian breweries that has taken place over the last 50 years.

Craft brewing has a long history in Norway, harking back to the days when no farm was complete without a brewhouse. Many structures found at old properties include a designated "bryggehus": a separate building where beer was produced. Home brewing in Norway is common, albeit understated (due to its association with home distilling, which is illegal) pastime. Examples can be found in Oslo at Oslo Mikrobryggeri, Scandinavia's first microbrewery and brewpub, and Nøgne Ø in Grimstad.

As with most countries in Europe and America, the most popular style of beer in Norway is pilsner-style pale lager. According to the Norwegian brewers' association, almost 92% of beer brewed in Norway is pale lager.[1] In places[where?], this is the only style of beer to be had, except at Christmas time, when Christmas beers become available. These are dark malt beers traditionally brewed for the holiday season.

Due to government restrictions, beers above 4.75% abv are only available from licensed premises or from the state-run Vinmonopolet ("wine monopoly") liquor stores. This has resulted in some foreign breweries decreasing the alcohol content in their beer in order to make them legal for supermarket retail. In addition, in some municipalities alcohol sale is further restricted, with beer only being available through licensed retailers. This practice is mostly restricted to northern and western municipalities.

Norway has limited availability of beers on tap in pubs and nightclubs. This is due to the custom of each pub signing a contract with one brewery, limiting them to providing draught beer from that brewery. In exchange, the brewery will provide the bar with all the systems required for pulling beer, including tanks, taps, and glasses. In place of the tap selection, bars often carry a number of bottled beers. However, these usually carry a much higher price tag.

Styles of beer that are typical of Norwegian brewing traditions are:

Pilsner - the pale lager style which originated in the Czech city of Plzeň. This is the dominant beer type with almost 92% of the market share. The weaker (below 4.75% abv.) types are the most common, but most breweries also brew stronger varieties (similar to the Bavarian Spezial beer style) for sale through the Vinmonopol.

Bayer - a dark lager with roots in Bavaria (Bayern). The Norwegian version is often slightly sweeter than German dark lagers. Once rivaling pilsner in popularity, its market share has dropped from 20% in 1950 to 0.2% in 2004. Being the most popular industrial-brewed beer before the Second World War, it lost its popularity due to the occupation.

Juleøl - a dark, malted beer exclusively available at Christmas time. Traditionally this was a strong ale which was brewed at home. In modern times each brewery produces their own variety of Christmas beer, mostly a lager. Most breweries brew both weaker varieties (for sale in supermarkets) and more traditional, stronger varieties.

Bokkøl - a strong, dark style of lager, typically 6-7% ABV, with a sweet, complex flavor. It originates from Germany, where it is known as Bockbier.

In Norway, beer is classified into four categories by ABV (alcohol by volume), labeled from A to D. The class both determine the tax level, age restrictions, where, and when it can be sold.