Cottingham is a village and civil parish in the East Riding of Yorkshire, England. It lies just to the north-west of the city of Kingston upon Hull. With a parish population of 17,263 in the 2001 UK census,[1] Cottingham (along with other villages) claims to be the largest village in England.

The name Cottingham derives from 'Homestead of Cotta's people'; Cotta being the name of an Anglo-Saxon tribal chief from the mid 5th century. Cotta is derived from Ket, the female deity of the Ancient Britons, which itself comes from the Celtic word Coed which means 'a wood'. The earliest recorded owner of Cottingham was Gamel, the son of Osbert, from the reign of Edward the Confessor in the 11th century.[2]

The parish church of St Mary the Virgin, Cottingham

Shortly after 1066, William the Conqueror took possession of the manor and handed it to Robert Front de Boeuf, one of his prized knights. By the time of the Domesday book in 1086 the Cotting manor was owned by descendants of Front de Boeuf, a family called Stuteville. It was made up of a mill, several fisheries and cultivated farm land[citation needed].

In 1200, a royal licence to hold a market, fairs and to fortify Baynard castle was obtained from King John.[3] By 1349, the manor had passed through Stuteville's female family line to Joan Wake, the Fair Maid of Kent (who married her cousin Edward the Black Prince and was the mother of Richard II). Baynard castle remained the manor house until the reign of Henry VIII, when it was destroyed by fire. The ramparts of the castle are still visible in the gardens off Northgate, near the corner of West End Road. (see map)

In the Middle Ages, the current site of Cottingham High School was a royal hunting ground to be enjoyed by the Prior of the Minster of St John, Beverley. From the 16th to late 18th centuries, the site remained arable open fields until enclosure in 1793[citation needed]. Shortly afterward in 1802, the site was used to build a late Georgian styled house called Cottingham Grange. The house survived until 1951 and although in disrepair, was used by the Ministry of Defence during World War II as officers quarters. The current school opened in 1955 with additional blocks added in September 1975.[4]

The Cottingham Parish Church is a large Gothic structure built in 1272 and dedicated to St. Mary, the Virgin. The interior is predominantly Victorian with several monuments; of note those dedicated to Burtons of Hotham[5] and the tombstones with monumental brasses dating from 1383.[6]

The first Free school in Cottingham was built in the grounds of the church in 1666, by John Wardle Jnr to educate the children of the poor. Mark Kirby left a substantial endowment in his will of 1712, renaming the school the Mark Kirby Free School. By 1783, a workhouse had been built as an extension to the school, with segregated male and female sections. The present building on the site is not the original and is now the Church Hall.[7]

In the same period, around 1771 the Churchwardens of St Mary’s allocated land to the east of the village to poor families of Cottingham. The settlement was originally known as 'Paupers’ Gardens' and renamed 'New Village' in the 1820s - leading to the current name New Village Road, between Endyke and Middledyke lanes.[8]

Castle Hill Hospital is built on the grounds of a manor house called Cottingham Castle, which was owned by Thomas Thompson until the late 19th century. In the 1820s there were high quality fresh water springs on the site linked to nearby Springhead. A single turret, a Folly in the grounds of the original house still remains and can be seen from Eppleworth Road. The Castle Park estate, lying on the land below the hospital grounds was built over a 20 year period from the mid 1960s[citation needed].

Until 1857, nearby Skidby was part of the parish of Cottingham. 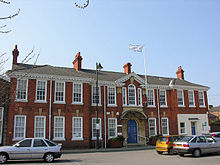 The modern village has two Victorian high streets, Hallgate and King Street, which cross at a set of traffic lights in the centre of the village. Two main roads run to the north and south; Northgate and Southgate, respectively. The railway line from Hull to Beverley is to the east. Baynard Avenue and West Green are to the west. To the south of the main crossroads is the modern market square with council offices, a Civic Hall and library. To the north is King George V playing fields. Surrounding these areas is mainly post-war suburban housing.

The most affluent, old houses lie east of the railway line, on the main route into Hull. Two of these buildings are now the home to campus accommodation for the University of Hull; Needler Hall, a former psychiatric hospital and Thwaite Hall, an 18th century country house with a 1960s annex[citation needed].

The Lawns is a late 1960s student accommodation complex near the original site of Baynard Castle. The Lawns was built by architects Gillespie, Kidd and Coia, winning the RIBA Bronze Regional Award for architecture in 1968 and was Listed Grade II in 1993.[9]

To the west of The Lawns is the Victorian municipal cemetery, where poet Phillip Larkin is buried. Larkin resided locally whilst head librarian at the University of Hull, a role he kept for 30 years until his death in 1985.[10][11]

There are a number of public houses in Cottingham; Black Prince on The Parkway, The Blue Bell on West Green, The Duke of Cumberland on the market square, the Cross Keys on Northgate and The Railway on Thwaite Street. The Fair Maid is a recent renovation, also overlooking West Green. Near the cross-roads in the centre of the village are The King Billy (King William IV), The Tiger and Hallgate Tavern. In May 2011, six of the public houses were involved in the Cottingham Springboard Festival, an annual music festival that showcases local and regional performers.

In 1981, the annual Christmas lights were started by local traders as a way of increasing trade and adding to the sense of community during the winter season.[12]

St Mary's church has developed and maintained an Anglo-Catholic tradition and has several choirs. On Sundays there is a sung Eucharist at 9.30 am and Choral Evensong at 6.30 pm. The church has some interesting animal-related traditions; on Palm Sunday a donkey is led through the church and there is also an annual St. Francistide service at which pets may receive a blessing.[13] Also living freely in the church tower are a pair of Orange-winged Amazon Parrots.[14] There are also Roman Catholic, Methodist and URC churches in the centre of the village, and Jehovah's Witness and Plymouth Brethren places of worship further out.

There are four primary schools: Bacon Garth, Croxby, Hallgate and Westfield. In September 2004, Cottingham High School was made a specialist Media Arts college. Cottingham has two local police stations. The first is on Priory Road, which replaced the station which was originally on Finkle Street and the second is located within the University of Hull's accommodation 'The Lawns'.

Cottingham has a Scout group consisting of Beavers, Cubs, Scouts and Explorers. There are also two Guide Units, two Rainbow Units, three Brownie Packs and one Ranger (Senior Section) Unit based in the village. Further groups belong to the Cottingham Guiding District in Skidby (Rainbows), and Little Weighton (Brownies).

Hull City A.F.C.'s training ground is located on Millhouse Woods Lane on facilities previously owned by Northern Foods. The local football club, Cottingham Rangers AFC, was established in 1972. It consists of seventeen teams playing in the Hull Boys Sunday Football League and the East Riding Girls Football League.[15] The Club is affiliated to the East Riding County Football Association and is an FA Charter Standard Club.[16]

Cottingham is served by a railway station that provides an intermediate stop between Hull and Beverley on the Yorkshire Coast Line to Scarborough.