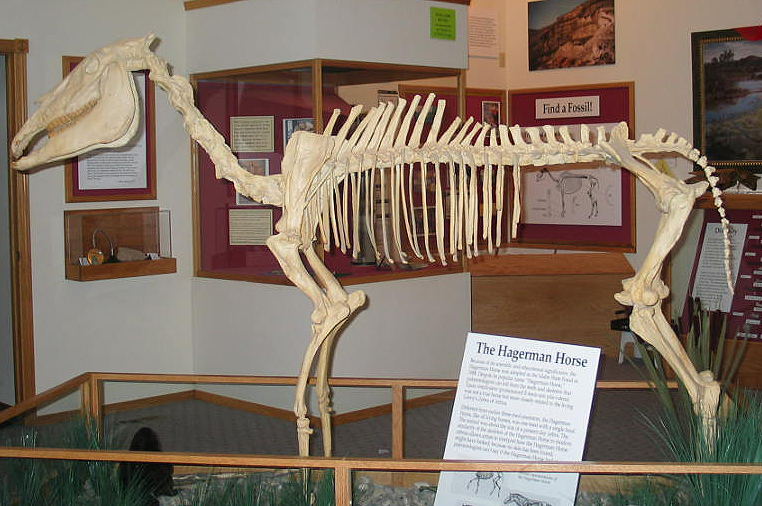 The Hagerman horse ("Equus simplicidens"), also called the Hagerman zebra or the American zebra, was a species of equid from the Pliocene period and the Pleistocene period. It was the ancestor of modern horses. Discovered in 1928 in , it is believed to have been like the of .

A cattle rancher named Elmer Cook discovered some fossil bones on this land in Hagerman, Idaho. In 1928, he showed them to Dr. H.T. Stearns of the who then passed them on to Dr. James W. Gidley at the . Identified as bones belonging to an extinct horse, the area where the fossils were discovered, called , was excavated and three tons of specimens were sent back to the Smithsonian in Washington, D.C.

Excavation of the fossils continued into the early 1930s. floor grew to convert|5000|sqft|m2 with a backwall convert|45|ft|m high. Ultimately five nearly complete skeletons, more than 100 skulls, and forty-eight lower jaws as well as numerous isolated bones were found. Some paleontologists believed that such a large amount of fossils from in one location was because of the quarry area being a watering hole at one point. The waterhole could have been where the bones of the Hagerman horses accumulated as injured, old, and ill animals, drawn to water, died there. It is now believed by most paleontologists that an entire herd of these animals probably drowned attempting to ford a flooded river and were swept away in the current and ended up buried in the soft sand at the bottom.

The Hagerman horse first appeared about 3.5 million years ago. It was approximately 110-145 centimeters (43 to 57 inches) tall at the shoulder. It weighted between 110 and 385 kilograms (385 to 847 pounds). An average Hagerman Horse was about the same size as an . It also was relatively stocky with a straight shoulder and thick neck, like a zebra, and short, narrow, donkey-like skulls. It is thought to have had stiff, upright manes, ropy tails, medium-sized ears, striped legs, and some striping on the back.

The horse probably lived in grasslands and floodplains which is what Hagerman was like 3 million years ago. The horse went extinct about 10,000 years ago, the same time as many other species of the period.

The Hagerman horse is the state fossil of Idaho. [http://www.statefossils.com/id/id.html]