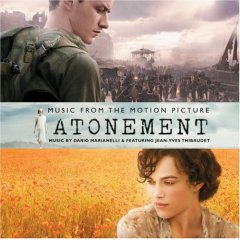 "Atonement: Music from the Motion Picture" is the Academy Award and Golden Globe-winning from the 2007 "Atonement", composed by and performed by French classical pianist . This was their second collaboration with director , following the soundtrack for his 2005 adaptation of "Pride & Prejudice".

In addition to winning an and a , Marianelli received nominations for the and the . Marianelli also received three awards for Film Score of the Year, Best Original Score, and Film Music Composition of the Year for "Elegy for Dunkirk" in the Awards.

The most notable elements of the score are the and the typewriter, which is often directly influenced by the characters' actions. When a character stops typing on the typewriter, for example, the ticking typewriter in the score ceases. The title of track 4, "Cee, You and Tea" is a play on the spelling of the word "," which is in the letter that Robbie writes and Briony intercepts, thus setting off the chain of events in the film.