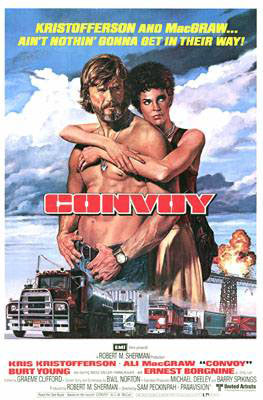 Martin "Rubber Duck" Penwald (Kristofferson) comes into conflict with Sheriff Lyle "Cottonmouth" Wallace (Borgnine). Rubber Duck and his trucker friends, Pig Pen (Young), Spider Mike () and Widow Woman (), get into a fight with Wallace and his deputies at a . After handcuffing Wallace to a barstool, they decide to head for the state line to avoid prosecution. Melissa (MacGraw), a whose car has broken down, agrees to ride with the Rubber Duck, and the pair soon fall in love.

The truckers drive across and , with Wallace in belated pursuit. Additional independent truckers join them to form a mile-long in support of the Rubber Duck's vendetta against the abusive Wallace. The truckers communicate with each other via , and much of the jargon associated with the CB craze is sprinkled throughout the film. The trip touches on social empowerment issues of class, race and gender as well as the place of the law in society. As the rebellious truckers run from the police, the Rubber Duck becomes a reluctant .

It becomes apparent the truckers have a great deal of political support and the of New Mexico, Jerry Haskins (), meets Rubber Duck. At about the same time, Wallace and a brutal arrest Spider Mike, who left the convoy to be with his wife after giving birth to their son. Wallace's plan is to trap Rubber Duck. A janitor at the jail, unaware of the plan, messages by CB radio that Spider Mike has been arrested. Various truckers relay the message to New Mexico.

The film culminates with a showdown near the where Rubber Duck is forced to face Wallace and a National Guard unit stationed on a bridge. Firing a , Wallace and the Guardsmen destroy the truck causing it to plummet from the bridge and crash into the churning river.

The movie concludes with a public for Rubber Duck, in which Haskins promises to work for the truckers by taking their case to Disgusted with the politics of the situation, Pig Pen abruptly leaves the funeral. A distraught Melissa is led to the school bus with the "long-haired friends of Jesus", where she finds Rubber Duck in disguise sitting in the back. He asks, "You ever seen a duck that couldn't swim?" The convoy takes to the road with the in tow, abruptly ending the politicians' speeches. As the bus passes Wallace he spies the Duck and bursts into laughter.

The picture finished 11 days behind schedule at a cost of $12 million, more than double its original budget. Surprisingly, "Convoy" was the highest-grossing picture of Peckinpah's career, notching $46.5 million at the box office. But his reputation was seriously damaged by rumors of increasingly destructive alcohol and abuse. Peckinpah would make just one more film, "The Osterman Weekend" in 1983, before his death the following year. [cite book |first=David |last=Weddle|authorlink= David Weddle| title="If They Move...Kill 'Em!"| publisher=Grove Press |year = 1994|pages=517-518. ISBN 0-8021-3776-8]

Peckinpah has a cameo as a sound gaffer during an interview scene. [cite web |title=Internet Movie Database, Trivia for "Convoy" |work=imdb.com |url=http://www.imdb.com/title/tt0077369/trivia |accessdate=2007-07-20] Rubber Duck's is generally represented in the movie as a Mack RS786LST [ [http://www.stlouisdumptrucks.com/convoy9-04b_003.htm Trucks from the film "Convoy"] ] .

This film going round the cinemas in Britain started a massive lasting wave of illegal use in Britain, leading eventually to CB radio becoming legal in Britain.

Features
*"Convoy" by C.W McCall
*"Lucille" by
*"Cowboys Don't Get Lucky All The Time" by
*"Don't It Make My Brown Eyes Blue" by
*"I Cheated On A Good Woman's Love" by
*"Okie From Muskogee" by
*"Southern Nights" by
*"" by Billie Joe Spears
*"Keep On The Sunny Side" by
*"Walk Right Back" by Annie Murray