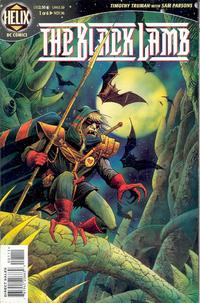 "The Black Lamb" is a six-issue that takes place in a setting. Published in late 1996 and early 1997 by as part of their now defunct Helix , the series was written and drawn by .

Set in an unnamed near future city that has a appearance and feel, "The Black Lamb" stars a character named Diarmaid Donn, a centuries old who is originally from medieval . Donn, known as the Black Lamb, is a figure authorized by the supernatural elements of the city, known collectively as the Tribes of the Night, as judge, jury and executioner in matters pertaining to the protection of the Tribes of the Night.

cquote|He was designed to be a "Shadow" for the monster-class -- a defender of the things that go bump in the night. Even monsters need heroes, after all.

Although some members of the Tribes of the Night live above ground, the majority reside, hidden in secret, in a huge maze of underground caverns beneath the city.

In the back of issue #1, Tim Truman wrote a column titled "Out for Blood" in which he noted the influences and inspirations for "The Black Lamb". Among the named sources are 's 1931 motion picture version of Frankenstein, the stories featuring and "" by writer, . [Truman, Tim, "Out for Blood", printed in "The Black Lamb" #1, dated November 1996, published by DC Comics]

Tim Turman was unsatisfied with a new printing process used on "The Black Lamb" that he felt hurt the series in its original printing.

In 2008, he authorised the free online release of the series by Comicmix.com.

In medieval Ireland, Diarmaid Donn lives with his wife (a normal human) and children. Like other vampires of his world, he was born a vampire with a mortal lifespan just slightly longer than a human. His son was born a human, but his daughter was born a vampire like him.

When their small farm is attacked by s Donn's wife and son are killed. Recognizing them as vampires the attackers take Donn and his daughter as prisoners. Donn's daughter is tortured to death, her last words being a request to her father to drink her blood to give him strength so that he may survive. It is an act that will make him immortal, but make him a social outcast among the Tribes of the Night as well. He does so, becomes immortal and kills his jailers.

The Black Lamb deals with a group of three specialists who have come to the city to hunt. He kills two, but brings the leader to stand trial before the Court of Monsters. The two deaths attract the attention of Commissioner Damn who begins to investigate the activties of the Tribes of the night.

The Black Lamb learns of a war that has developed between two Werewolf clans. On one side, the family of Niceros, an old friend of the Black Lamb's. On the other side, the forces led by Lykaon, an ancient werewolf who disguises himself as human and owns and runs his own corporation. Seeking to end the hostilities which are attracting the sort of attention which can be dangerous to the Tribes of the Night, the Black Lamb breaks into Lykaon Towers in an attempt to kill Lykaon. Once inside, he learns that the whole war was a plot by Lykaon to lour him into a trap.

Seeking to kill the Black Lamb, drink his blood and become immortal, Lykaon captures the Black Lamb and places him in an iron maiden. Thinking the Black lamb dead, Lykaon opens the iron maiden but is incorrect is this assumption. After halucinating about the events leading to his immortality, the Black Lamb breaks free and kills Lykaon.

A group of dangerous specialists led by a pair of twins named Renfield and Helsing come to the city. The Black Lamb and Commissioner Damn meet for the first time when they both seek to stop this group's activities.

Dracula and his daughter, the Blood Contessa come to the city seeking to rule it. To stop them the Black Lamb recruits Commissioner Damn and a number of other minor character who have appeared in other issues in a bid to stop them. This group locates Dracula's lair in the caverns beneath the city and begins their plans of attack.