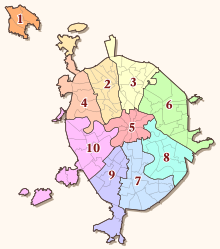 The federal city of Moscow, Russia is divided into ten administrative okrugs, which are in turn subdivided into districts (raions). The city does not have a downtown area; the urban core is scattered across the city. Prominent business areas include Tverskoy, Arbat, and Presnensky Districts (home to the future Moscow-City complex) to the east. Central Administrative Okrug as a whole has a large concentration of businesses. The city hall and major administration buildings are located in Tverskoy District (home to the Moscow Kremlin). Western Administrative Okrug is home to Moscow State University, Sparrow Hills and The Mosfilm Studios. The total population of the Federal City of Moscow was 10,382,754 inhabitants at the Russian Census (2002).

While administrative okrugs are a subdivision of state administration, districts have the status of municipal formations, i.e. local self-government entities.