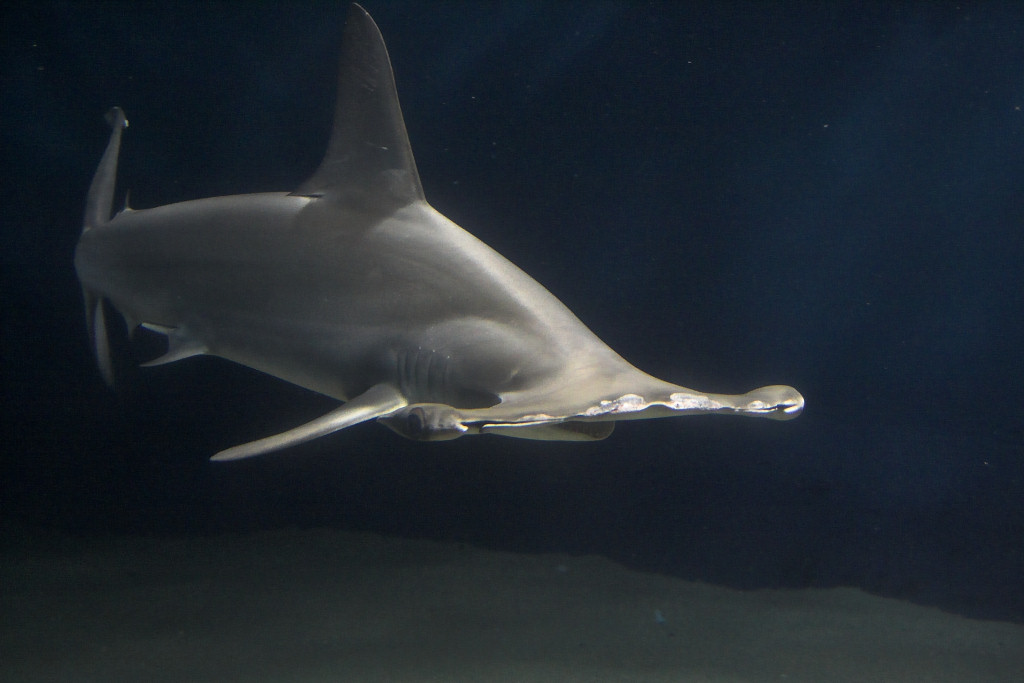 Hammerhead sharks of the "Sphyrna" are members of the family Sphyrnidiae. The only other genus of Sphyrnidae, "Eusphyra", contains only one species, "", the . The hammerheads are aggressive predators, eating , rays, s, and s. They are found in warmer waters along coastlines and .

The nine known s of hammerhead range from 0.9 to 6 m long (3 to 20 feet). All the species have a projection on each side of the head that gives it a resemblance to a flattened . The shark's eyes and nostrils are at the tips of the extensions.

The hammer shape of the head was once thought to help sharks get food, aiding in close-quarters maneuverability and allowing the shark to turn sharply without losing stability. However, it was found that the special design of its e allowed it to make the turns correctly, more than its head. But as a the hammer would also provide lift; hammerheads are one of the most negatively buoyant of sharks. Like all sharks, hammerheads have electroreceptory sensory pores called . By distributing the receptors over a wider area, hammerheads can sweep for prey more effectively.

Wider spacing between sensory organs better enables an organism to detect s and therefore the location of a gradient source such as food or a mate. The peculiar head of this shark can be thought of as analogous to the e of an .

Hammerheads have disproportionately small mouths and seem to do a lot of bottom-hunting. They are also known to form schools during the day, sometimes in groups of over 100. In the evening, like other sharks, they become solitary hunters. hammer heads have a hammer shaped head.

Reproduction in the hammerhead shark occurs once a year with each litter containing 20 to 40 pups. Hammerhead shark mating courtship is a violent affair. The male will bite the female until she acquiesces, allowing mating to occur. Unlike many other shark species, the hammerhead shark has internal fertilization which creates a safe environment for the sperm to unite with the egg. The embryo develops within the female inside a and is fed through an , similar to mammals. The gestation period is 10 to 12 months. Once the pups are born the parents do not stay with them and they are left to fend for themselves. Young hammerheads are often born headfirst, with the tip of their hammerhead folded backward to make them more streamlined for birth. A world-record 1,280 pound (580 kg) pregnant female was caught off on , . The shark was carrying 55 pups, which suggests scientists had previously underestimated the number of pups per gestation.

In May 2007 scientists discovered that hammerhead sharks can reproduce asexually through a rare method known as , (a direct development without the need of a sperm, similar to how social insects can reproduce). At first the announcement was considered skeptically, because a female shark can store sperm inside her for months, even years, but it was confirmed through testing that the pup lacked any paternal DNA. This is the first documented case of any shark doing this. [ cite journal | last=Chapman | first=DD | coauthors=Shivji, MS; Louis, E; Sommer, J; Fletcher, H; Prodöhl, PA | title=Virgin birth in a hammerhead shark | volume=3 | issue=4 | date=2007-08-22 | journal= ]

Of the nine known species of hammerhead, three can be dangerous to humans: the scalloped, great, and smooth hammerheads.

Geneticist Andrew Martin used to study all of the hammerhead species and he concluded that the first hammer appeared on the , which has the largest hammer, and the rest of the hammerhead sharks evolved one at a time from the original winghead shark each with a smaller hammer.

The scalloped hammerhead is listed on the World Conservation Union's (IUCN) 2008 Red List as "endangered”. The status given to the fish is as a result of over-fishing and demand for its fins, an expensive delicacy. Scientists expressed their concern about the plight of this unique creature at the American Association for the Advancement of Science annual meeting in Boston. The young swim mostly in shallow waters along shores all over the world to avoid predators.

The great hammerhead is currently listed as endangered.